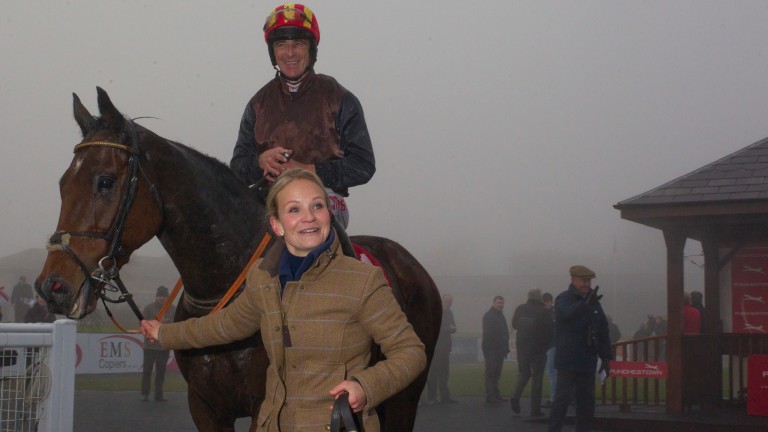 Madeleine Tylicki leads in First To Boogie after an emotional Punchestown win
Patrick McCann
1 of 1
By Richard Forristal 11:21AM, NOV 21 2016

On a bitterly cold afternoon at Punchestown that was defined by a lack of visibility due to dense fog, Madeleine Tylicki – sister of recently stricken Flat jockey Freddy – lit up proceedings with a heartwarming first win as a trainer when First To Boogie landed a gamble under Davy Russell.

Nichols Canyon had earlier emerged from the shadows to plunder his second successive Morgiana Hurdle for a Willie Mullins-Ruby Walsh combination that is gathering increasing momentum.

However, it was First To Boogie that moved those in attendance to descend on the winners' enclosure for the most emotionally charged reception of the day after a run-of-the-mill handicap hurdle.

Sporting a radiant smile as she led in the heavily backed 6-4 favourite, locally based Tylicki illuminated the place. What she and her family have been through since her brother was left paralysed from the waist down after that gruesome pile-up at Kempton is simply incomprehensible.

In the greater scheme of things, victory in a modest €12,000 handicap will do little to alleviate their pain, but this was a welcome port in the storm. It certainly lifted spirits.

"It's a special winner at a difficult time," beamed Tylicki, as she wrestled with the contrasting emotions. "This will have put a smile on my brother's face. It's a special day.

"We're very grateful for all the support and messages for Freddy. It has been very uplifting for him. It's a tough time but he's a very determined and tough young man. I am absolutely confident that he will fight through this."

It was a bittersweet, poignant triumph at odds with the gloom of the prevailing elements. Granted, it proved a decent card for punters but, from a viewers' perspective, it was a frustrating afternoon.

Suffice to say, visuals were at a premium. On the flip side, the extreme conditions prompted sharp-witted hacks to dust down some old gems.

"There won't be many running and riding inquiries today!" proffered one wag accurately. Another recalled the myth and controversy that followed the 1947 Grand National.

Such was the ease with which Caughoo won for the McDowell family that his rider Eddie Dempsey was forced to defend accusations that he and his mount had joined in at halfway. British Pathe archive footage does not indicate that it really was fog that led to Dempsey having to defend his good name, but never let the truth get in the way of a good story.

Yesterday lent itself to conspiracy theories and questions of perception. Even Dessie Scahill inadvertently contributed to the mood of irrelevance and intrigue that abounded in the absence of a proper viewing spectacle.

Soon after Dalmatia led runners past the stands in the opener, the field disappeared out of sight until it came around again to the final flight.

Dalmatia scored by half a length, and Scahill proceeded to make a pretty reasonable assumption.

"And Dalmatia has made all," he declared, providing the comedians on duty with some more ammunition. "How does he know?" came the retort.

So it went. Somewhat indefensibly in the age of modern technology –an old-fashioned walkie-talkie might have sufficed – no official time was recorded for the first race as a consequence of the start not being visible from the judge's box.

Visibility only deteriorated thereafter, but the officials found a solution.

Most others got to grips with the situation as well, including the camera operators. General manager Dick O'Sullivan has been lauded for the lengths he has gone to in turning around Punchestown's fortunes. However, even his devotion to the cause has its limits.

When a vehicle was needed to bounce around the ambulance track to provide a mobile unit for producing pictures, O'Sullivan's love for his Mercedes trumped his love for Punchestown.

It was left to his de facto number two Richie Galway to do the selfless thing and offer up his BMW, a gesture topped by that of the cameraman, who spent the afternoon hoisted out of the sun roof like an armoured tank operator. He was last seen defrosting in the sauna.

The best was made of a bad situation, although you will struggle to identify a more dispiriting Grade 1 spectacle than the feature, as the long odds-on super-sub Nichols Canyon finally appeared in sight over the final flight to score for a second year in a row at his ease.

With Identity Thief also readily justifying favouritism in the Craddockstown and A Toi Phil taking the Florida Pearl, the Grade 2 novice chases were dominated by Gigginstown, and Michael O'Leary's all-conquering firm departed with a treble after Samcro's easy bumper win. Of the 14 races held at Punchestown and Cork, eight were shared by one or other of the in-form quartet of O'Leary, Mullins, Gordon Elliott and Henry de Bromhead.

In that sense, it was business as usual but, of the 14 winners, it was the newcomer that left the most lasting impression. You did not need decent visibility to appreciate just how much of an uplift the Tylickis will derive from First To Boogie's coup. It would be nice to think that it might be the first of many fillips for the family.