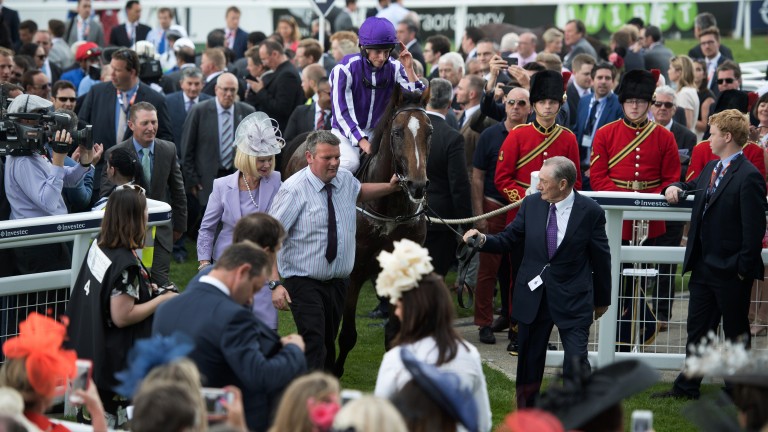 Reel rules: Highland Reel and Ryan Moore return to the winner's enclosure in front of the stands
Edward Whitaker / racingpost.com/photos
1 of 1
By Stuart Riley 2:12PM, JUN 4 2017

Over the years many a trainer must have prayed for something, anything, that would help them get the better of Aidan O'Brien in a Group 1, and on Friday a problem fuelling the Coolmore plane meant Highland Reel arrived just an hour before his race.

But not even that was enough to stop him providing his trainer with an eighth Coronation Cup victory.

Highland Reel left Ballydoyle at 4am, sat in his box on a runway for four hours, arrived just after 2pm, had a "piddle", a wash, a saddle and then a jockey put on his back, cantered a mile and a half to the start, galloped a mile and a quarter back, paused, eyeballed Hawkbill, and then put his head down to the line. Epsom's famously tricky track was the least of his worries.

Ryan Moore bounced out the five-year-old, and now five-time Group 1 winner, to dictate terms. He stretched on rounding Tattenham Corner, pressing his positional advantage. Turning in he had them all at it.

Then he waited. Slowly, William Buick began to get last year's Coral-Eclipse winner Hawkbill on terms. And yet Moore waited. Hawkbill edged in front. Yet again, Moore waited. Then he went – putting five and a quarter lengths into Hawkbill, who was mugged for second by his running-on stablemate Frontiersman. 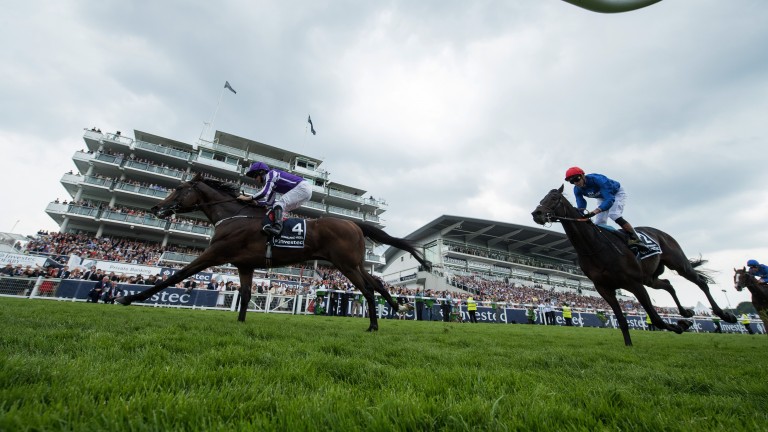 Class edge: Highland Reel gets the better of Frontiersman in the Coronation Cup
Edward Whitaker / racingpost.com/photos

If ever there was a combination built to overcome such tremendous complications it is O'Brien, Moore and Highland Reel, who has travelled the world, having raced 22 times in seven countries. He may go nowhere very quickly on runways, but he runs away with Group 1s when he gets where he's going.

"Davey, who rides him at home, Andrew, who's in charge of him and Damian were all very happy with him, so I was happy to run," he said. "And Ryan's given him a great ride. He's a horse who's had a busy time, but he loves travelling and racing and he's very determined."

He continued: "He's a great horse, very versatile. He has tactical speed and stays well. He's an amazing horse really."

Of the pre-race complications, O'Brien said: "He's been here just over an hour, he's been travelling since four this morning. He was very warm, he only got washed before he went into the parade ring as there was no time.

"He had to go into the box for a piddle and then he came out, was washed and tacked up. He didn't have a lot of time to do anything.

"I was worried about it. It's certainly not an advantage. I don't know what kind of race he'd have run without it."

On future plans for last year's King George winner, he added: "We're thinking he could run at Royal Ascot in the Hardwicke if he needed the run, then the King George maybe. He can travel after that."

Runner-up Frontiersman and second favourite Journey, who disappointed in fifth, could reoppose in the Hardwicke.

Charlie Appleby said: "It was a big step up from a handicap win at Newmarket but Frontiersman's homework had been so good and he has a pedigree to die for. He's getting better with age. We paid the £25,000 supplement for a reason.

"He deserved a crack but James [Doyle] said inexperience caught him out. The Hardwicke would be the logical next step."

He added: "Hawkbill loves soft ground and I wouldn't be worried about coming back in trip. William said he went to have a battle with the winner but he quickened again."

Journey's trainer John Gosden said: "I told everyone on ITV and Racing UK she hadn't come to herself yet. The race will bring her on a lot. The Hardwicke would be a good aim."

FIRST PUBLISHED 3:18PM, JUN 2 2017
He’s tough and has tactical speed and stays. He really is an amazing horse

Ballydoyle could run three in Coronation Cup and 1,000 Guineas at Newmarket O'Brien: no concerns over Arizona's stamina ahead of third clash with Pinatubo O'Brien still plotting but could send two colts to Newmarket to tackle Pinatubo