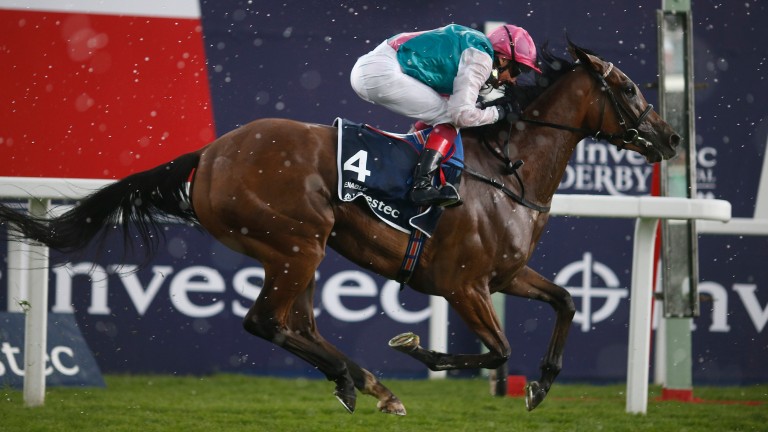 In the moments leading up the Investec Oaks the elements ensured a mighty big bang was heard across Epsom racecourse. Come the Classic itself, a new superstar of the sport made an equally big bang as Enable forged clear of odds-on favourite Rhododendron to triumph for British Flat racing's dream team.

As torrential rain poured down and racegoers fled for cover, two exquisitely-bred and enormously talented fillies fought out a gripping duel down the home straight that ended in Khalid Abdullah's latest homebred champion forging clear of Rhododendron.

There can have been few wetter Oaks but also none faster, as Enable stopped the clock in a race record time that gave Frankie Dettori his fourth success in the coveted prize, 23 years after his first, and John Gosden his second.

That opponent again ran admirably in third, albeit a yawning 11 lengths behind a five-length winner whose performance established her as both a powerful stayer and a middle-distance athlete of the highest order.

The trademark flying Dettori dismount was witnessed, but during the race he had been holding tight, unlike Olivier Peslier, who bailed out from America's Daddys Lil Darling, fearful of a gruesome collision with the starting stalls after she set off like a scalded cat amidst thunder and lightning. 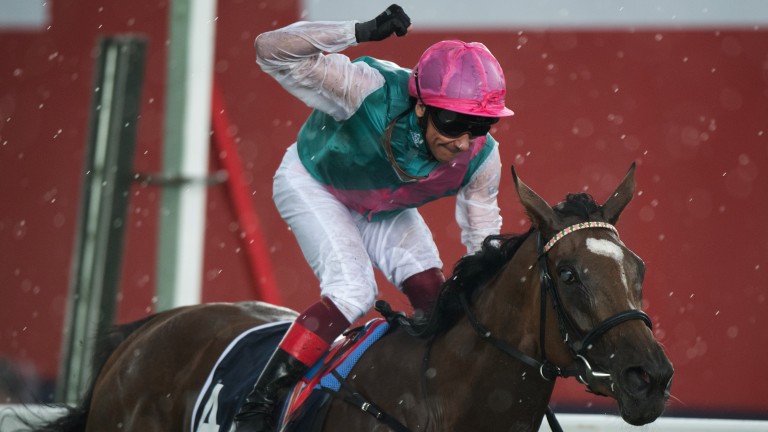 Punching the air: Frankie Dettori celebrates Classic glory aboard Enable in the Oaks
Edward Whitaker / racingpost.com/photos
"It wasn't nice out there," said Dettori. "Horses get scared. You heard the bang – I got scared! When it rains so quickly the visibility becomes very bad and the reins start slipping. You try to be extra cautious and give yourself an extra yard.

"At the back of my mind I knew I had a great chance and I knew there was a question mark about Rhododendron's stamina. I knew my filly would get to the line. When I saw Ryan not moving, I thought, 'Oh God, I'm in trouble!' Then once I saw the distress signals coming out from her, I knew my filly would stay right to the end.

"In the last furlong, the conditions were so bad I daren't take my hands off the reins to celebrate. I thought just get the job done and celebrate afterwards. She has put up a very good performance – and I think she will get better and better."

Should Enable do that, the second half of her season will be thrilling to watch, as was this Oaks, given the manner in which the winner and second locked together from the top of the home straight.

Yet inside the final furlong Rhododendron's stamina ebbed away, leaving Gosden to celebrate a special moment for his yard's King George and Eclipse hero Nathaniel, from whose first crop Enable hails.

On his debut and swansong Nathaniel was beaten by Frankel, but in the race to sire a British Classic winner, Nathaniel – or "good old Nathaniel", as Gosden called him – has struck first. 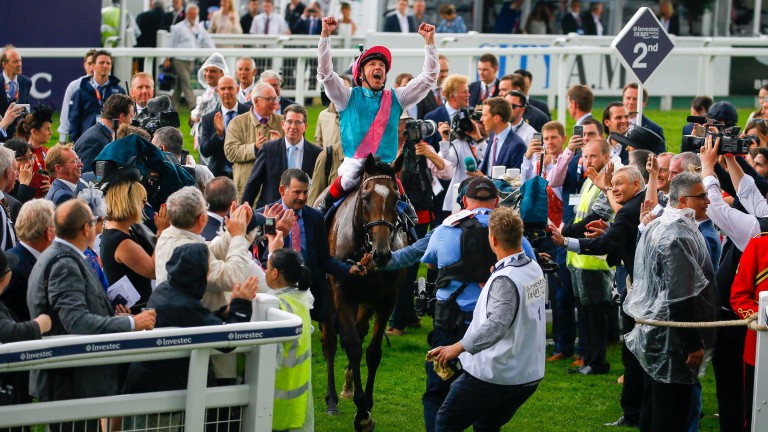 "Ryan and Frankie are good mates who knew they had the two best fillies. Ryan had told me he was very impressed with our filly when she beat him at Chester. Going over to France the other day for the Saint-Alary, he said, 'Boy, she quickened and then quickened again.' It is not often Ryan compliments someone else's horse. He is quite tight with that sort of thing."

Gosden added: "After Chester I felt she was as good as I've had since Taghrooda. She's in that class. I said coming down today we would have to turn over a brilliant filly. I said there was a chance we might – and we have."

Taghrooda, the heroine here in 2014, went on to claim the King George. When such a target was suggested for Enable, the man with five runners in the Derby seemed rather taken aback.

"Jeez, that would be bold," said Gosden. "I'll have a word with her. She'll tell me what to do. Horses always tell you if you watch and listen.

"There are races like the Irish Oaks and King George. There are no plans, though. We'll discuss it with Prince Khalid. He has a strong opinion on everything."

The prince's representative on the Downs, Teddy Grimthorpe, described Enable's display as "utterly brilliant". Indeed it was.

"That was a proper Oaks, a real Oaks," said Gosden. "I thought with the drama beforehand and then the flash of lightning, it was all a bit Hollywood."

Like any great Hollywood production, it had a marvellous leading lady.

FIRST PUBLISHED 4:38PM, JUN 2 2017
In the last furlong the conditions were bad, so I daren't take my hands off the reins to celebrate

All-weather bonanza on Tuesday with 226 runners at Kempton and Newcastle 'Frankie had ridden seven winners and I said we might have lost between £8-10m' Who is racing's Lionel Messi? The leading seven jockeys primed to shine in 2020 Fahey among those ready to unleash team as mammoth 369 entries made at Newcastle Pinatubo steps up Guineas prep at Chelmsford as Palace Pier is ruled out 'Enable looks magnificent' - Frankie Dettori eyeing return of dual Arc winner