Death Of Denman FAREWELL TO A GREAT 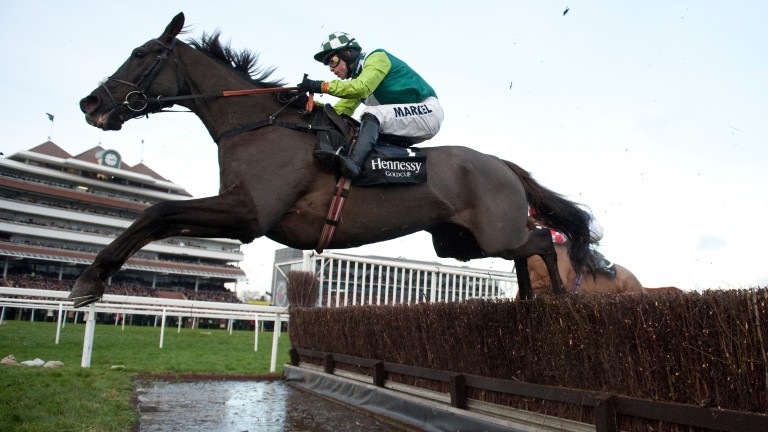 Denman: "He was a magic horse who had a tremendous following because of the wholehearted way he went about his racing"
Edward Whitaker
1 of 1
By Peter Scargill UPDATED 8:01PM, JUN 6 2018

Denman, an icon of 21st century jump racing, died on Tuesday aged 18, leaving an outstanding legacy with a memorable victory in the Cheltenham Gold Cup as the pinnacle and prompting emotional tributes across the sport.

Known by his legions of fans as The Tank, Denman secured his place in jumping folklore through a string of brilliant performances and his head-to-head rivalry with stablemate and neighbour Kauto Star.

The defining moment of his career came in the 2008 Cheltenham Gold Cup – a race in which he never failed to give his all – when he produced a relentless performance of galloping and jumping to defeat defending champion Kauto Star and future Grand National winner Neptune Collonges.

Co-owner Paul Barber said: “If you’ve got great, big horses like him there's a lot of strain and unfortunately they don’t live forever. I was so lucky to have him at home for the last couple of years and watch him enjoy life."

Barber said the decision to euthanise Denman was taken following the deterioration of the 18-year-old’s stifle, the equine equivalent of a human knee.

In a statement released on Wednesday morning, Paul Nicholls, who trained Denman for Barber and Harry Findlay, said: "It is with regret that I have to report our hugely popular Cheltenham Gold Cup winner Denman was put to sleep painlessly yesterday.

"The decision was taken by his devoted owner Paul Barber with the full support of myself, our head lad Clifford Baker and our vet Buffy Shirley-Beavan. We all agreed it was the right thing to do because he had begun to go downhill in the past few days and we did not want to see him suffer.

“He was tough, hardy and willing, wasn’t the easiest to train and would bite your hand off in his box given half a chance. He came along at the right time and was one of our superstars during a golden era for Team Ditcheat.”

One of the toughest and classiest horses I have ever seen, utterly relentless when at his best he was the perfect staying chaser and everything that Mr Barber ever wanted in equine form. Sleep well big man, thank you for giving us as much as you did. #theTank #Denman pic.twitter.com/3xyUy2wC2x

After winning a point-to-point for trainer Adrian Maguire, Denman was purchased privately for €100,000 by Barber and Findlay and arrived to join Nicholls’ galaxy of stars at Manor Farm Stables in Ditcheat, Somerset.

The son of Presenting had a near-faultless record in his first three seasons under rules, with a surprise defeat by Nicanor in the 2006 Royal & SunAlliance Hurdle (now Ballymore Novices’ Hurdle) the sole blemish.

During that time he landed many big prizes, including the Challow Novices’ Hurdle, Royal & SunAlliance Chase, Hennessy Gold Cup, Lexus Chase and Aon Chase, before demolishing his rivals in his first Gold Cup.

The build-up to that clash with Kauto Star reached fever-pitch. It added much to the occasion, and to the legend of both horses, according to Clifford Baker, Nicholls’ longtime head lad.

He said: “I was lucky enough to be here when he came as a four-year-old and I was still helping to look after him up until yesterday. We could see him every day for the last 18 months or so in the paddock behind Mr Barber’s house and he’s had a brilliant life – he loved every minute of it.

“I feel privileged to have been around such a good horse. He ran and won some great races – two Hennessys and a Gold Cup. And all that time he had his great mate Kauto next door to him.

“Those two were just magical, a dream come true. To have two horses of that ability, both winning Gold Cups and being exceptionally good, was something else. The rivalry between the two was part of it and added to the overall excitement.

“It was fantastic and I’ll remember it for the rest of my life. It’ll be great to be able to tell my grandchildren about it one day, stories of horses like that. They’ll both always be remembered. Denman had the best of everything and never wanted for anything.”

Thomas said: “It’s a very sad day for Mr and Mrs Barber, Paul Nicholls, Harry Findlay and everyone who’s looked after him or been associated with him through his racing career and retirement. 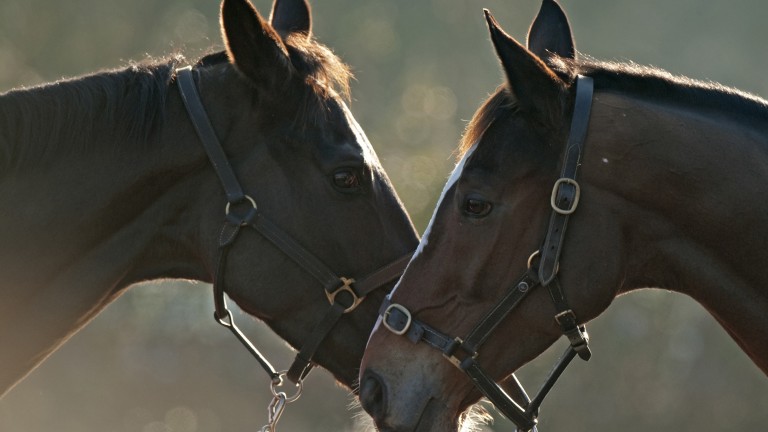 “A lot of people will be feeling very sad today as he was a bit special and touched so many people’s hearts – not only those who knew him but those who didn’t know him.

"That’s the amazing thing about horses such as him, Kauto Star and the other greats who did so much for National Hunt racing. I’ll always be very fortunate to have been associated with him.”

He added: “I remember everything [from the Gold Cup] and it doesn’t feel like it was ten years ago. He was in the best form any horse could ever be in – he was incredible and Paul had him in peak condition.

"For a horse of his size he didn’t ride like a big horse; he was so agile and so sharp and push-button. He was like a sports car in sports mode, every little move you made he was like bam, right where you wanted him.

“We did what we had to do in the Gold Cup and he proved he was the best horse on the day. I don’t care what anyone says, no horse could have lived with him. He was phenomenal to keep up that gallop.”

The following season Denman did not return until February after the diagnosis of a fibrillating heart. He went on to finish second to Kauto Star in the Gold Cup, a position he would fill in the showpiece event in the next two seasons.

Rest easy Denman, and thank you for the memories. pic.twitter.com/WHUo0lmOhm

Denman was to win just once more, carrying top weight and the ardent hopes of thousands in the 2009 Hennessy Gold Cup, a performance that brought a tear to the eye of his connections.

In second was another of Denman’s stablemates, What A Friend, who was ridden by Thomas. He said: “I was receiving a lot of weight from him and if it’d been any other horse I think I’d have won. We came there to challenge and when I got upsides him there was no way he was going to let me pass.

“I got my head in front just before the last and, while my lad wasn’t exactly the easiest ride, I couldn’t have picked a worse horse to get past – it was like meeting AP McCoy in a finish. You’ll rarely get a horse who wants to win as much as he did.” 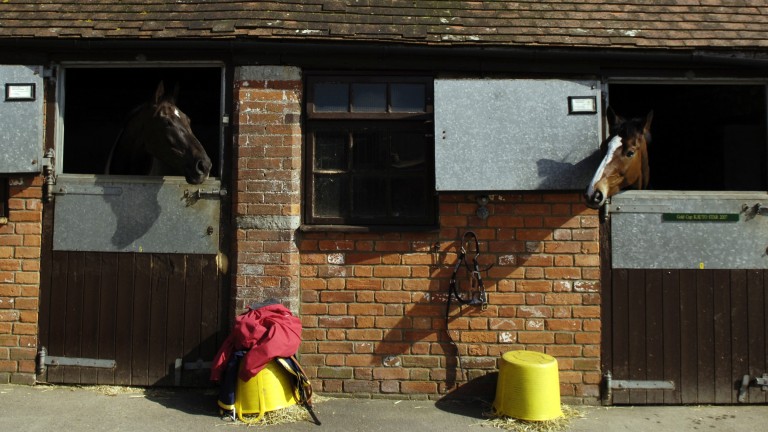 Having survived a potentially fatal infection in 2013, he spent much of his retirement competing in team chasing before returning to Ditcheat.

Nicholls said: “Denman was a superb horse who enjoyed a fantastic life in retirement, first of all team chasing with Charlotte Alexander in the Cotswolds before returning to Ditcheat, where he was turned out to grass in the care of Paul’s daughter-in-law Emma with a couple of other retired horses. Paul visited him almost every day and was immensely proud of his achievements.

“Denman was known affectionately to punters and racegoers as The Tank, which I always felt was a fitting description. He was a magic horse who had a tremendous following because of the wholehearted way he went about his racing.”

A sad day for Mr and Mrs Barber in ditcheat, Paul and everyone that cared for Denman in his racing career and retirement.Theres no doubting he was a horse of a lifetime who had the most amazing will to win like nothing else I've ridden. #RIPDENMAN

He added: “Denman was never a particularly good workhorse on the gallops, sensibly saving his best for the track, where his strength, power and never-say-die attitude made him so difficult to beat.

"For several years he lived in the adjoining box to Kauto Star and their first showdown at Cheltenham in the 2008 Gold Cup was a promoter’s dream.

"I feel so privileged to have trained the pair of them as they were two of the best chasers ever seen on a racecourse.”

15 Career victories, comprising one point-to-point, five over hurdles and nine over fences

550 Peak racing weight in kilos, making him a heavyweight in every sense of the word

6:47:84 The time of Denman's victory in the 2008 Gold Cup. He holds the record for having finished runner-up in the race three times

FIRST PUBLISHED 9:05AM, JUN 6 2018
He came along at the right time and was one of our superstars during a golden era for Team Ditcheat

Harry Findlay: 'It was, and always will be, the easiest £33,000 I've ever won' 'Lester Piggott 100 per cent guarantees me that Denman was better than Arkle'