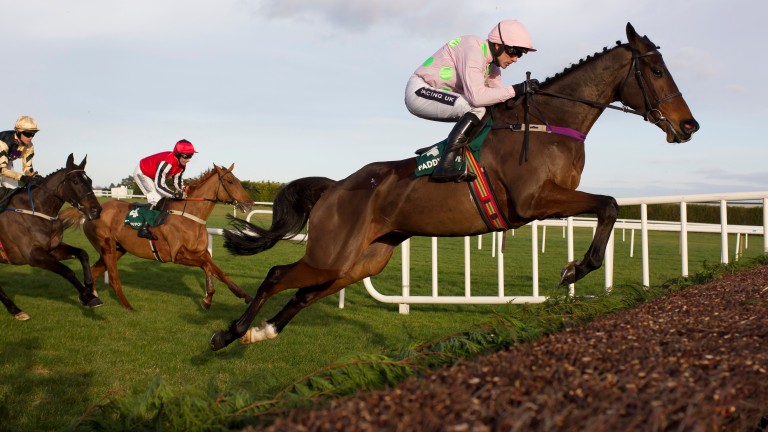 Douvan soars to victory in the Paddy Power Cashcard Chase at Leopardstown
Patrick McCann
1 of 1
By Richard Forristal 5:26PM, DEC 27 2016

The majestic Douvan strengthened his grip on the two-mile chasing division with a breakthrough triumph in open Grade 1 company.

He cruised to an easy victory in the Paddy Power Cashcard Chase on a day when the insatiable Willie Mullins reduced the deficit in the trainers' championship.

Mullins began the afternoon €462,100 behind Gordon Elliott, but he plundered five races at Leopardstown – including both Grades 1s –plus another at Limerick to replicate the previous afternoon's across-the-card six-timer.

Elliott struck back with Noble Endeavor's timely €104,500 coup in the big handicap chase, but the Closutton juggernaut is cranking up an irresistible head of steam and the prize-money gap on Elliott at the end of the day had closed to €297,637.

Douvan's fluent eight-length rout to secure the €59,000 spoils in the showpiece Grade 1 was undoubtedly the most satisfying of Mullins's successes.

After Douvan had taken his unbeaten record for the champion trainer to 12 in typically sublime fashion under Ruby Walsh – who also had four winners on the card – sponsor Betway went 4-9 (from 8-13) for the Queen Mother Champion Chase at Cheltenham in March.

This was little more than what we have come to expect from the only horse who could be said to challenge Thistlecrack for sheer unadulterated precocity over fences.

The returning Sizing John once again got closest to Douvan, finishing second to him for a fifth time.

Mullins was moved to suggest his brilliant six-year-old could soon challenge Hurricane Fly's status as the best horse he has trained.

"My heart skips a beat every time he goes down to a fence and gets a bit close to it," he admitted after witnessing both his and Walsh's third success in the race.

Douvan and Ruby Walsh sail towards another success in the Paddy Power Cashcard Chase
Patrick McCann
"Potentially, he must be the best steeplechaser, or horse, that we've had. It's hard to see we might have one better than Hurricane Fly, but he never jumped a fence. I'm just keeping my fingers crossed he stays sound."

Mullins reiterated that Douvan will be kept at the minimum trip this term, with the Tied Cottage Chase at Punchestown on February 5 a potential target.

"I don't plan these things," he said of Douvan's next race. "Hopefully he'll be sound when we get home and then we'll have a look. The Tied Cottage might be the race for him. We'll look nearer to home rather than have to travel."

Walsh, winning the race for a first time as a Grade 1, added: "I thought Douvan was very good. He clocked four minutes and two seconds – that's proper speed here.

'They couldn't land a blow'

"We went a really good gallop and I took it off Alisier D'Irlande when he slowed down – we never let up. They're not bad horses, but they couldn't land a blow."

Remarkably, Douvan's win constituted an 11th straight success for his owner Rich Ricci, dating back to the day Douvan made his return at Cork.

That neat symmetry was followed, however, by Ricci's Riven Light being beaten into fourth in the Future Champions Novice Hurdle –which Mullins still managed to claim with Saturnas.

Sizing John's trainer Jessica Harrington said: "I was delighted with him, he's run a great race.

"We'll look to step him up in trip now, possibly in the Kinloch Brae Chase at Thurles, with an eye on the Ryanair Chase or even the Gold Cup."