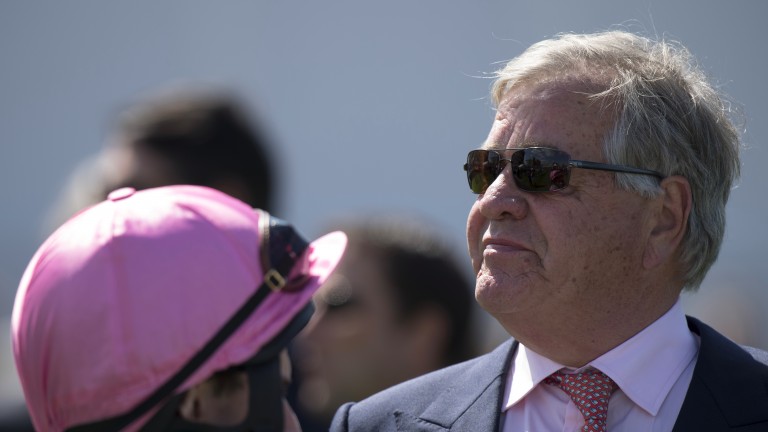 Sir Michael Stoute: could have big days to look forward to with Crystal Ocean
Edward Whitaker
1 of 1
9:10PM, MAY 17 2017

Is it ridiculous hype or are some people sitting on the bet of a lifetime? All should become Crystal clear today.

It's never easy finding sanity when a financial frenzy takes over a market and people throw in their money for fear that they miss the chance to get rich quick.

Remember the dotcom boom? And bust? When speculators jumped at the chance to grab a slice of the 'information superhighway' action, only to be left with a pile of share certificates not worth the paper they were printed on.

That didn't happen to the canny Ron Wayne. He got hard cash for his percentage of the technology company he helped to found, a whole 800 dollars. Which looked a shrewd deal at the time but less so now when his share of Apple is reckoned to be worth around $35 million.

Just occasionally, speculative gambles turn out to be a spectacular success and that's a lesson to bear in mind when looking ahead to the Betfred Dante Stakes this afternoon.

The Derby betting market at this stage of the season is peculiarly susceptible to wild surges of enthusiasm.

Recent history is littered with names such as Nash House, Slip Stream and World Domination (!), maiden winners who featured on thousands of ante-post betting slips which were turned out as worthless as Boo.com shares come Dante evening.

But North Light was an Apple among the Excites and Pets.coms, stepping up from ordinary company to reward his backers by scoring at both York and Epsom for Sir Michael Stoute in 2004.

So will his trainer pull off the same trick with Nottingham maiden winner Crystal Ocean? Plenty seem to think so, given the colt was a 33-1 shot for the Derby a few days ago and has been backed into 12-1 for Epsom – and just 3-1 for the Dante – in a frenzy of ante-post activity.

Enthusiasm for him is clearly infectious as even Anthony Oppenheimer told the Racing Post: "I believe Sir Evelyn de Rothschild's horse has a very good chance" – and he himself owns the unbeaten Cracksman, who goes into today's race as Britain's leading Derby hope, at least according to the bookmakers.

Not that those odds reflect the apparent views of the owner, who took this with Golden Horn two years ago but warned: "I wouldn't be surprised if we don't win at York … and then decide not to run in the Derby."

Cracksman is already proven at Epsom while risk-averse punters keen to see hard evidence of quality before making an investment may be tempted by Rekindling.

He won the Ballysax Stakes at Leopardstown for Joseph O'Brien and that form looks gilt-edged as the second, third and fourth went on to fill the first three places in the Derrinstown Stud Derby Trial over the same course and distance.

So glad to see her back

Of course, being proved right and seeing your horse land their Classic trial in style is no guarantee of a return – or even a run for your money.

So Mi Dar was slashed in price for the Oaks after her fine win in the Musidora Stakes here last year, only to be ruled out by injury.

She came back in the autumn and proved her class with a close third in the Prix de l'Opera at Chantilly, the form of which suggests she will be hard to beat on today's return to York for the Betfred Middleton Stakes.

A bold Group 1 effort at last year's Arc meeting is a mixed blessing for Prix de l'Abbaye sixth Duke Of Firenze, as it ensures him top weight in the Betfred "Supports Jack Berry House" Handicap.

He is racing off a mark 13lb higher than when winning this for David Griffiths last year, although he was travelling as well as anything when stopped in his tracks at Chester last week so it may not be an unlucky 13.

And Mark Johnston has had a newcomer finish second in the two-year-old maiden on the card for the last three seasons so his debutant Taifbalady is probably worth looking out for.

But past performance is no guarantee of future results – as any financial adviser is obliged to tell you.

FIRST PUBLISHED 6:00PM, MAY 17 2017
Just occasionally, speculative gambles turn out to be a spectacular success and that's a lesson to bear in mind

One trainer, one jockey, one horse and one race to watch on Saturday Mark Crehan gets backing of Stoute and Dettori following 28-day Doncaster ban