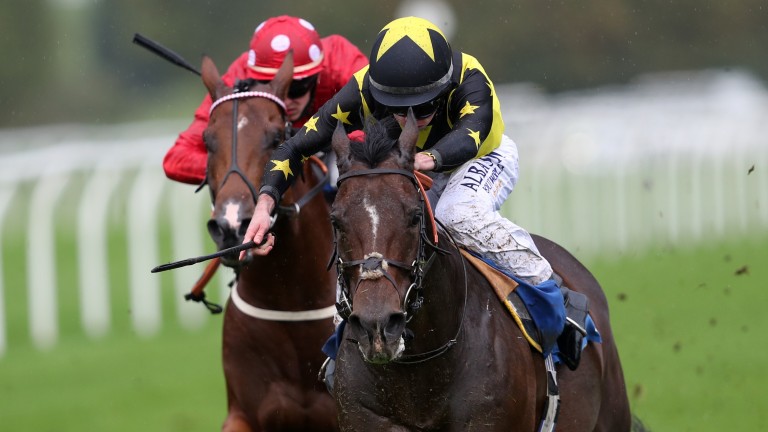 Robert Cowell saddled half of the six-runner field in the 5f handicap and the three-runner approach resulted in a 1-3-4 as likeable sprinter Blue De Vega gained a tenth success and once again advertised his versatility.

The Julia Morley-owned eight-year-old has won four races on good to firm, most recently at Doncaster in August, and landed this race for the second year running on heavy ground after scoring under Tom Marquand.

Blue De Vega defeated stablemate Ishvara last year and she finished third this time around, with Cowell’s other runner Benefit Street back in fourth.

Greg Chung, assistant trainer to Cowell, said: "Blue De Vega is very adaptable and goes on most ground as his form shows. That will do him the world of good for his confidence and he's competitive again off this kind of mark.

"He's a grand horse at home, very sound and easy to train. He's a favourite in the yard."

The other Class 3 contest on the eight-race card went to the Queen’s Pied Piper, who took his record on heavy ground to 2-2 with a four-length win for John and Thady Gosden and Rab Havlin in the 1m2f handicap. Downsman boasts the same record in heavy ground handicaps after striking in the 1m4f event for Jim Boyle and Neil Callan.

Charlie Appleby unearthed yet another promising two-year-old when Perseus Way ploughed through the testing ground to score on his debut in the opening mile novice.

The track was hit by 21mm of rain overnight but the son of Sea The Stars handled the gruelling conditions to score by three-quarters of a length.

Jockey James Doyle said: "It was a proper slog on this ground, but he was quite fit and was able to keep going. He coped with conditions well. He’s definitely a nice type for next year, he’s big and raw and should furnish away over the winter."

'I thought I was beat'

Jason Hart was surprised by the photo-finish verdict to the 1m2f seller having thought his mount Possible Ambition had been headed on the line.

It was the John Quinn-trained three-year-old, owned by Andrew Reed, that was called the winner though, gaining a first victory and subsequently bought in for £6,000. Runner-up Trusty Scout was bought by David Pipe for £8,000.

Hart said: "I thought I was beat. The second completely stopped and this fella got there just inside the furlong and I didn't want to take the momentum back off him because he was waiting on the other horse a little.

"He won in the end, which is all that matters. He acts on this ground, which is a big help. It's quite attritional out there."

Favourite backers had to wait until the finale for a winner with John Clare landing consecutive renewals of the 7f apprentice handicap.

The Pam Sly-trained five-year-old was partnered by Christian Howarth, who is based with Marco Botti. Tyler Heard was the other successful apprentice on the day, winning division two of the 6f handicap on Willingly for Mark Usher.