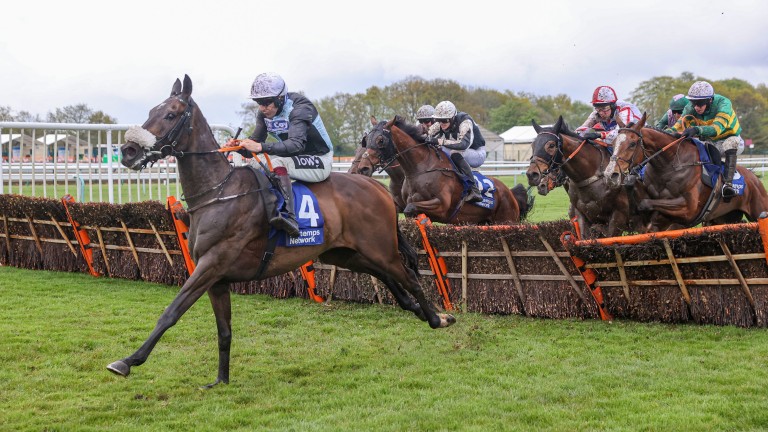 Copperless starts to assert his dominance in the Swinton Hurdle
John Grossick (racingpost.com/photos)
1 of 1
By Andrew Dietz 5:48PM, MAY 8 2021

From agony at Aintree to ecstasy at Haydock – a trip to the north west provided a very different outcome for Copperless in the £100,000 Pertemps Network Swinton Hurdle.

Deemed an unfortunate loser at last month's Grand National meeting when falling two out, the Olly Murphy-trained six-year-old made up for that mishap by routing his rivals in the first major race of the new jumps season.

Aidan Coleman got back on board Copperless, who was ridden by Lewis Stones in the conditional/amateur race at Aintree, and the stable jockey extended his unbeaten record on the 9-2 favourite to three with an eight-and-a-half length victory.

"It was gutting what happened at Aintree and we've made amends here," said Murphy. "It was no fault of Lewis Stones when he came to grief at the second-last with the race at his mercy last time.

"I was very nervous about the ground, but it's not as soft as you'd think and he handled it. I was cursing the handicapper for putting him up [3lb], but he's been proved right.

"He's on an upward curve and is going to contest nice races now. I'm not sure whether he'll sneak into the Galway Hurdle, but it's certainly an option, and the Greatwood is the obvious race."

The homebred Copperless is owned by Murphy's father Aiden in partnership with Alan Peterson, who has had great success with the likes of Philip Hobbs-trained pair Massini's Maguire and Fair Along.

"Dad is probably one of the unluckiest owners ever and I'm chuffed for him and the Peterson family, who have supported me since I started training," added the Warwickshire trainer.

Dell' Arca came from an unpromising position to run down Trincomalee strides from the line in the 3m½f handicap hurdle.

The David Pipe-trained 12-year-old had plenty to do on the run in and hit the maximum 999-1 in running on Betfair, but responded to Fergus Gillard's urgings.

"He needed every yard of it after the last and did not stop galloping," said the conditional jockey. "He's a lovely horse, a real yard favourite, and to be finishing off his races at his age is great."

"This place has been good to me," he added. "It was similar weather that day, but the ground was twice as deep."

Byron back with a bang 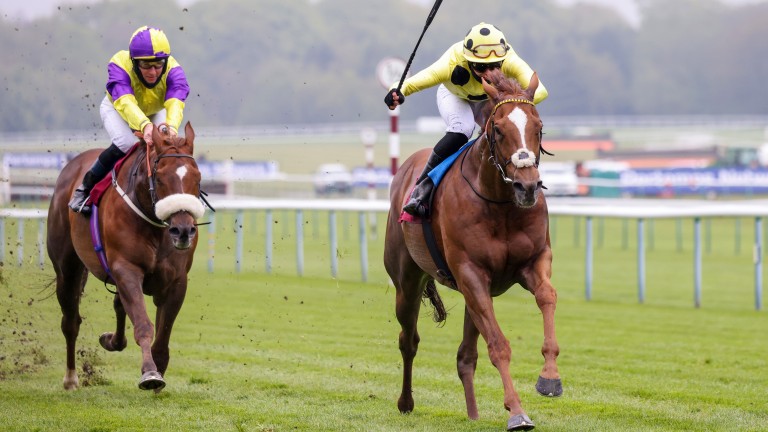 The performance of the Roger Varian-trained seven-year-old in the 6f conditions stakes was all the more meritorious as he was making his seasonal return – and second start anywhere since October 2019 – against race-fit rivals.

Brando tried to make all at a course where he finished runner-up in the 2018 Sprint Cup, but Cape Byron took up the running in the final furlong to post a comfortable success.

Winning jockey Eoin Walsh said: "He got away with on the ground as it's quite heavy out there. He handled it fine but it wouldn't be his ideal surface and he was getting a bit tired in the last 100 yards. Hopefully, he'll come on for it."

It was a productive day for Varian and owner Sheikh Mohammed Obaid Al Maktoum as the winner's half-brother Third Realm laid down a Cazoo Derby marker in the trial at Lingfield.

Qaysar won for the third time at the course with a career-best performance in the Listed Pertemps Network Spring Trophy.

Joe Fanning, who rode the 9-2 shot to victory for trainer Richard Hannon and owners Al Shaqab Racing, said: "He travelled well and it was never in danger once I switched him around. He's a very game horse and he loves the ground."

FIRST PUBLISHED 5:48PM, MAY 8 2021
He's on an upward curve and is going to contest nice races now