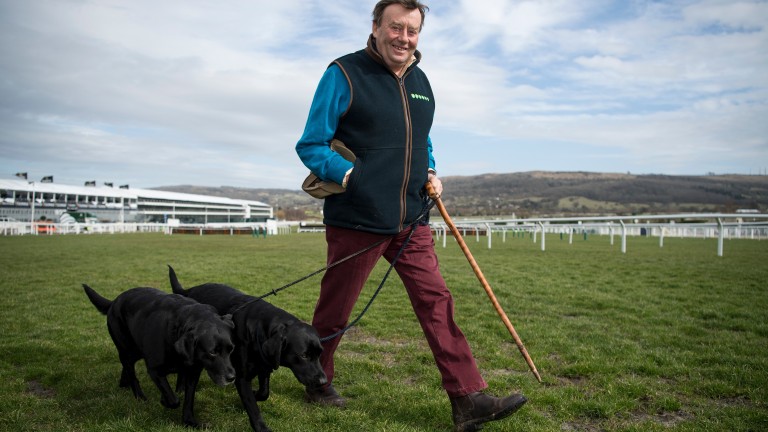 The forecast is for the ground at the start of the Cheltenham Festival to be the softest this century but Nicky Henderson was "very pleasantly surprised" by conditions when taking his traditional tour of the course with his two black labradors at Sunday lunchtime.

The going was officially soft, heavy in places as Henderson walked the track ahead of a huge week, during which he will saddle favourites in three of the main races: Buveur D'Air in the Unibet Champion Hurdle, Altior in the Betway Queen Mother Champion Chase and Might Bite in the Timico Cheltenham Gold Cup.

Henderson, who with 58 Cheltenham Festival winners has more than any other trainer, said: "It's soft for sure, but it's a long way from being desperate."

He added: "It was dry when I walked round, and I went round with just a jersey on, so it's a lovely drying day, with a good wind.

"Where they have new ground it's very respectable. I was expecting worse, so I was actually very pleasantly surprised. It's true that if you go where we've been going all winter it's going to be very messy, but there's plenty of new ground.

"I think Thursday's ground [on the New course] will be nice, and they'll have the best of it as there's a lot of new ground over hurdles. There's some new ground for the Gold Cup on Friday too."

Alan King was another to walk the course and his assessment was less upbeat. He said: "It's nice ground where it's fresh ground, but there's not a lot of it and I would have thought the fresh lines down the inner will soon get trashed. Where they've been racing through the winter it's soft/ heavy, and the forecast is the worry.

"We all know it's been a wet winter and it shows. In my opinion it's going to be very testing and for that reason we are going to be fairly thin on the ground, with Dingo Dollar already out of the Ultima and The Unit out of the Close Brothers. It's also going to be too soft for Mia's Storm in the RSA."

While on Sunday there was no prospect of an inspection being needed at Cheltenham, one is required 30 miles away at Stratford for Monday's meeting.

Ground conditions were described as soft, heavy in places on the chase course and soft on the hurdles course with up to 9mm of rain forecast before the meeting, but on Sunday officials were optimistic that racing would beat the weather and take place.

Clerk of the course Nessie Chanter, who will inspect at 7.30am, said: "We’re entirely raceable today and the hurdles course is fine. The only concern is the two-mile bend on the chase course, which wouldn’t want too much more rain.

"If we don’t get what the upper end of the forecast is then there will be no problems. It’s just that we’ve had more rain than was forecast for the last couple of days."

Talking points: key revelations from the day one festival declarations

FIRST PUBLISHED 2:46PM, MAR 11 2018
I was expecting worse, so I was actually very pleasantly surprised

Patrick Mullins faces licence battle as he ponders turning pro for Cheltenham 'He's won four of five, he's pretty tough' - Albert Bartlett trainer quotes Gordon Elliott in strong position for festival handicaps as overall entries drop Star riders forced to miss Cheltenham as amateurs are barred from festival Ascot gives backing to radical overhaul of jumps programme 'I just have so much belief in my horse, and so does Harry'