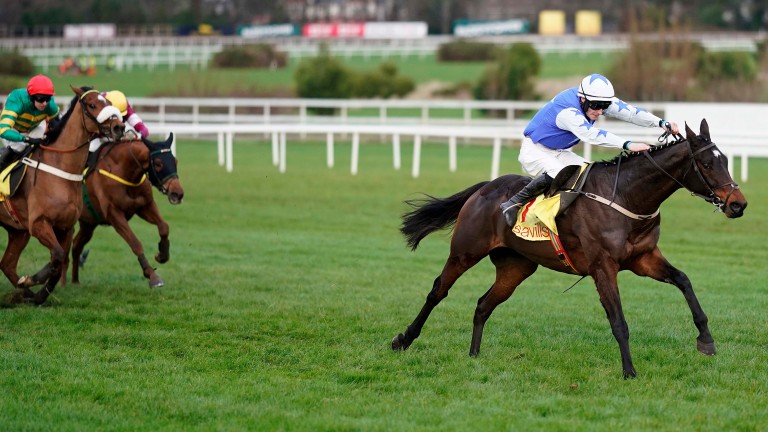 David Mullins rides out Kemboy as his rivals flounder in his wake in the Savills Chase
Alan Crowhurst
1 of 1
By Tony O'Hehir UPDATED 5:55PM, DEC 28 2018

Kemboy stole the show with an emphatic victory in the Grade 1 Savills Chase at Leopardstown on Friday, prompting bookmakers to promote him to third favourite for the Magners Cheltenham Gold Cup.

The Willie Mullins-trained six-year-old, ridden by David Mullins, took it up with a circuit to run and jumped his rivals silly before quickening clear up the run-in to score by seven and a half lengths from Monalee.

Bookmakers reacted by slashing Kemboy's odds for the Gold Cup, with Ladbrokes quoting just 6-1 and no firm offering more than 8-1 (from as big as 50s).

Monalee, who was up on the front end all the way, galloped on resolutely for second, holding off 9-4 favourite Road To Respect – who had little luck in running at crucial stages of the race – by a head. Monalee's odds for the Gold Cup were also cut, to a general 25-1 (from 33-1).

Willie Mullins, whose only previous win in the event had come with Don Poli in 2015, said: "When Kemboy flew to the front passing the stands I thought David had gone mad, but he rides by instinct and he knew what he was doing.

"I thought Kemboy would capsize in the back straight but David said he had an easy enough lead. The horse jumped very well and still had plenty in the tank going to the last. I loved the way he flew clear on the run-in.

"He's obviously an improving horse as this was his biggest test to date. He hadn't run since winning the Clonmel Oil Chase in the middle of last month and it could be that a good break between races suits him.

"With that in mind we might wait and go straight for the Gold Cup, we'll wait and see. Hopefully he'll continue to improve."

The winning rider said: "Everything went to plan, except we had to let him go, nobody took us on. He jumped well and there's still plenty to improve on I think. He could be a proper horse."

Kemboy had been a strong fancy for the Ladbrokes Trophy at Newbury at the start of this month, but ferry difficulties due to strong winds prevented him from travelling.

It was the second Grade 1 win of the week for Mullins and owners the Supreme Horse Racing Club, following their success with Aramon in the Paddy Power Future Champions Novice Hurdle on Thursday.

His trainer Noel Meade said: "You'd have to say he was unlucky not to have gone close. He almost fell. He seems okay but we'll check him out when we get him home."

It's seven years since the last winner of the Savills Chase followed up in the Gold Cup at Cheltenham, but there are comparisons with 2011 winner Synchronised as he was the last one to win it in such devastating fashion. Even if Road To Respect hadn't stumbled, Kemboy would have run out a very ready winner and he certainly wasn't stopping at the line. He seems to go on any ground and now has to be considered one of the main Gold Cup contenders.

FIRST PUBLISHED 3:16PM, DEC 28 2018
The horse jumped very well and still had plenty in the tank going to the last. I loved the way he flew clear on the run-in

Brewin'upastorm readily accounts for McFabulous in Grade 2 at Fontwell 'He's extraordinary' - Henderson thrilled with Champ ahead of Gold Cup bid 'His jumping was deadly' - Gold Cup hope Champ runs a cracker behind Sceau Royal 'If he can't breathe, he can't win' - Nicholls to check Cyrname after Ascot flop How big a factor will Goshen be in the Champion Hurdle?