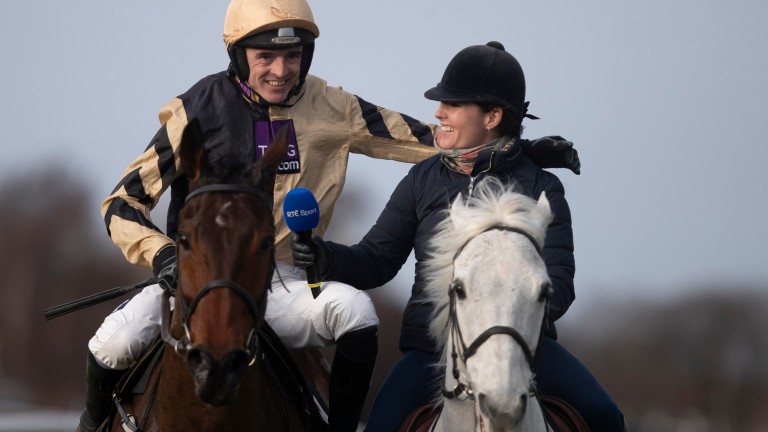 Ruby Walsh is greeted by sister Katie on Thousand Stars after his victory aboard Bellshill in the Unibet Irish Gold Cup
Patrick McCann
1 of 1
By Tony O'Hehir UPDATED 6:03PM, FEB 5 2019

Fast ground reduced the Unibet Irish Gold Cup from ten to just four runners, but Bellshill and Road To Respect still conspired to serve up a thriller.

Bellshill ultimately shaded the verdict by a short head after a rousing finish, with Ruby Walsh sublime in the manner in which he timed his final challenge to nail Road To Respect on the line.

The Magners Cheltenham Gold Cup remains a glaring omission from Willie Mullins' glorious roll of honour, but the trainer might just have unearthed another live contender.

Bookmaker reaction to Bellshill was positive and he was cut to a general 12-1 (from 16) for the Gold Cup. On his last visit to the Cotswolds two years ago he finished third to Might Bite in the RSA Chase.

Some questioned whether Bellshill would cope with the ground, which was good, good to firm in places on the chase course, and wondered if he might join the list of absentees from the big race.

But Mullins, who did withdraw Al Boum Photo, said: "I wasn't worried for Bellshill. He's by King's Theatre and I've always felt horses by him go on that sort of ground."

Mullins, who also has Kemboy and possibly Invitation Only for the Cheltenham showpiece, said: "We knew Bellshill needed the run here at Christmas and we thought he'd made good improvement since.

"He jumped very well and Ruby gave him a smashing ride. He threw some fantastic leaps down the back straight and we knew he'd get the trip well."

Asked about the relative merits of Bellshill and impressive Savills Chase winner Kemboy, with Cheltenham in mind, Mullins replied: "That's for others to decide. Kemboy has made more improvement this season than I anticipated, while Bellshill is also improving. Hopefully both will go to the Gold Cup in top form."

It was a remarkable tenth success in the race for Mullins. Owners Graham and Andrea Wylie were, by contrast, tasting success for the first time while for Walsh it was a third Irish Gold Cup triumph after Neptune Collonges (2009) and Quel Esprit (2012).

The rider said: "You don't need 20 runners to make a horserace, you just need the right two. They went at it every step of the way. I was in front, Sean [Flanagan] took it off me, I'd jump by him, he'd take it back off me. It was tit for tat every step of the way and it was a great rally from the last.

"I got a neck in front and then he was getting me back, so I was looking for the line. I was delighted when it was called as I'd have been kicking myself for getting there too soon.

"I don't think either of us had a ton up our sleeve away from two out, we were both stretching and they were always going to quicken a little bit, and it was who would stay best. That's what an honest horserace is.

"He can build on that and go forward now. He's a bit older, a bit stronger, and he showed today he really stays."

Road To Respect's participation was in doubt due to the ground but owner Michael O'Leary was keen to let him run and it almost paid off.

Trainer Noel Meade reflected: "He's run a cracking race but just wasn't letting himself down jumping on the quick ground, and lost ground at a few fences.

"Hopefully he'll be none the worse for it and we'll be able to crack on to Cheltenham."

Flanagan added: "He didn't jump as fluently as he has before, he backed off a little bit. Maybe the ground was a little bit quick for him, but he jumped the last well and had every chance going to the line if he was good enough. He wasn't."

Most bookmakers left Road To Respect's Gold Cup price at around 12-1.

Intriguingly, given the ground issues in recent weeks, the Red Mills Chase at Gowran Park a week on Saturday could be an unusually hot affair.

A possible clash with Presenting Percy is likely to be on the agenda for at least two of the Irish Gold Cup absentees, Monalee and Edwulf, according to their trainers Henry de Bromhead and Joseph O'Brien. Connections of Al Boum Photo and Anibale Fly will wait for easier ground before making plans.

FIRST PUBLISHED 6:50PM, FEB 3 2019
He jumped very well and Ruby gave him a smashing ride. He threw some fantastic leaps down the back-straight and we knew he'd get the trip well