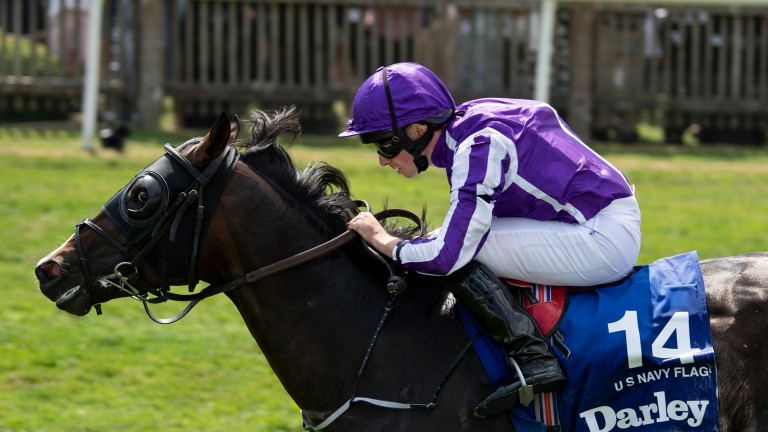 US Navy Flag wins the Darley July Cup after being dropped back from a mile
Edward Whitaker
1 of 1
By Bruce Jackson UPDATED 5:40PM, JUL 14 2018

US Navy Flag carved himself a niche in racing history when completing a Newmarket Group 1 triple crown of the Middle Park, Dewhurst and Darley July Cup.

That tells only half the story as his trainer Aidan O'Brien, conqueror of most of the peaks in Europe, is looking to scale The Everest, the fabulously rich sprint at Randwick in Australia in October, with this "amazing horse".

The astonishment was that the three-year-old managed to shake off three attempts this year to convert him into a Group 1-winning miler, when he would not back down but had come up short.

"He's unbelievable," said O'Brien of his fourth July Cup winner but the first since Australian import Starspangledbanner eight years ago.

"What threw us was that he was able to win a Dewhurst, after setting a strong pace, and he nearly won an Irish Guineas, probably the toughest mile any horse can run.

"He was absolutely out on his head in the final furlong but still kept trying, so he's an unbelievable little horse to be doing that."

To use an athletics analogy it was like Usain Bolt back over 100m having been beaten up by Mo Farah and co over 1,500m.

Clearly holding no grudge against his trainer, US Navy Flag unfurled his banner from the stalls, with Ryan Moore allowing him to charge down the middle of the course straight as a gun barrel.

Last year's third Brando, reshod after losing a shoe on the way to the start, came with a strong challenge but was shaken off by a length and three-quarters. That still sank any loyal naval personnel's forecast with the winner's stablemate Fleet Review third at 50-1. 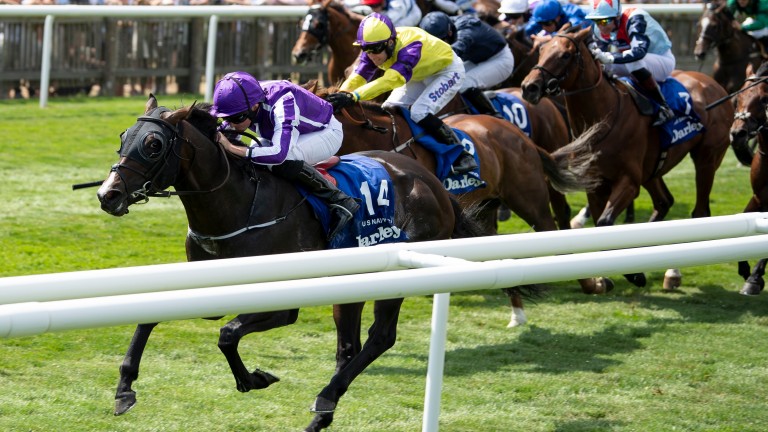 US Navy Flag takes victory by a length and three-quarters from Brando
Edward Whitaker
There was wonderment at US Navy Flag's re-emergence as a Group 1 winner but he was following something of a blueprint for success in this six-furlong sprint.

The 1980s were littered with three-year-olds who rediscovered their mojo after brave attempts at becoming milers – remember Chief Singer, Green Desert and Ajdal – and more recently came O'Brien's 2001 winner Mozart and in 2011 Dream Ahead.

The story of the race is simply told as US Navy Flag led the majority of the field down the middle of the track, with Eqtidaar and Redkirk Warrior trying to match him among a quartet on the stands' rail only to fall away.

Moore, winning his first July Cup, said: "The second came to me and probably got to a neck but he dug in – he's a very straightforward horse."

O'Brien added: "He doesn't need tactics. He's aggressive and wants to go forward, and if anything wants to take him on they'll have to be going hard."

It is likely to be the Australian sprinters who will find that out in The Everest over six furlongs on October 13 and that race being run around a bend holds no fears for connections.

Moore added: "What's important to him is the ground, today's ground." 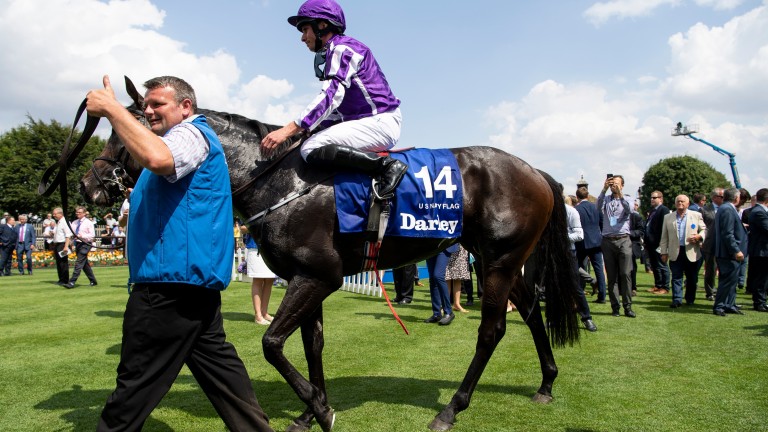 David Hickey leads US Navy Flag and Ryan Moore into the winner's enclosure
Edward Whitaker
O'Brien, so far thwarted in his attempts to conquer the early-summer American Classic scene, is looking forward to this new challenge.

"Australian racing is very strong and competitive, so it's great that we can race through the first half of the year in this country and then go down in the winter for the second half of their season," said the Ballydoyle trainer.

As to US Navy Flag's preparation, O'Brien added: "He'll probably have a little rest now, he's had a tough time, then we'll train him for The Everest."

O'Brien may be in the foothills so far in Australian racing, notwithstanding a Cox Plate and near-miss in the Melbourne Cup, but the 8-1 on offer from Paddy Power and Betfair Sportsbook for The Everest could be substantial.

Stravinsky 1999
O’Brien’s first winner of the July Cup had run his four previous races over seven furlongs, most recently finishing fourth in the Jersey Stakes, and was arguably the most unexpected of the trainer's quartet. Although he was the first-string from three runners, he was allowed to start at 8-1 but beat his 16 rivals easily by four lengths.

Mozart 2001
Mozart’s first run over six furlongs came in the July Cup. He had previously won the Jersey over seven furlongs at Royal Ascot, having finished runner-up in the Irish 2,000 Guineas. At Newmarket he started 7-4 favourite under Mick Kinane and stormed home, beating 17 opponents by upwards of three and a half lengths. Mozart followed up, dropped again in trip, in the Nunthorpe.

Starspangledbanner 2010
O’Brien’s third winner of the race had won the Caulfield Guineas over a mile in his native Australia but had returned to sprinting by the time of his switch to Ballydoyle. After a pipe-opener in the Duke of York, Starspangledbanner won the Golden Jubilee at Royal Ascot and then justified 2-1 favouritism under Johnny Murtagh at Newmarket, winning by a neck from Equiano. He didn’t score again in eight further starts.

FIRST PUBLISHED 2:33PM, JUL 14 2018
What threw us was that he was able to win a Dewhurst, after setting a strong pace, and he nearly won an Irish Guineas