The Irish Champion Stakes was a race billed between two horses – Saxon Warrior and Roaring Lion – and it proved just that, with the John Gosden-trained 8-11 favourite Roaring Lion coming out on top in a thriller.

Ridden by the in-form Oisin Murphy, who earlier on the card had ridden his first winner in Ireland aboard the Willie Mullins-trained Limini, Roaring Lion looked to have plenty to do with two furlongs to run in the Group 1 highlight, as Ryan Moore kicked for home on Saxon Warrior.

However, despite Saxon Warrior sticking on gamely the Newmarket 2,000 Guineas hero was just worn down late on by his old foe to be beaten a neck, to the joy of favourite backers, not to mention Sheikh Fahad, who with his brothers sponsored the race as well as owned the winner.

It was the sixth meeting between the first two home, and the score now stands four to two in Roaring Lion's favour.

"I had a lot of belief in the horse, John Gosden and Oisin," said Sheikh Fahad. "It's tricky when you come to a different country – that's his first time on a plane since he was a baby – so for him to take it in his stride and do that on the racetrack was great to see. It was a special feeling.

"Thank god, we're very lucky. It's a big team effort and we work hard all year round. The race panned out better for Saxon than us, but his turn of foot to go and get him was breathtaking."

When asked whether he would race next year, Sheikh Fahad added: "Plans haven't been finalised yet. He might stay in training, he might not." 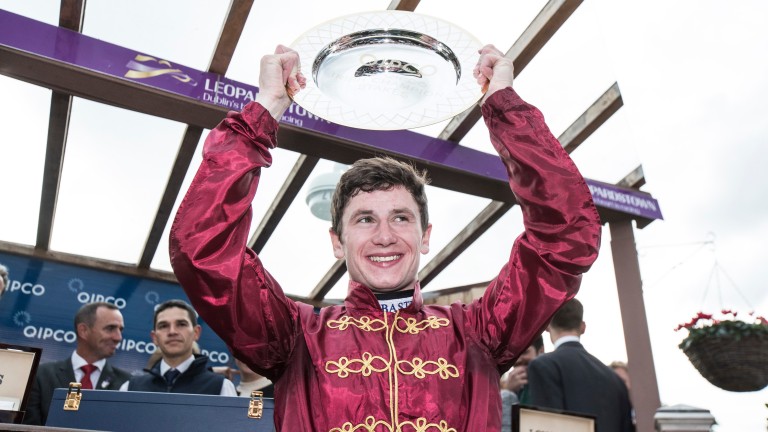 A delighted Murphy said: "I didn't have much experience of Leopardstown and was really learning on the job. But I had the right horse and this win in my home country means the world to me. I wondered how I'd react if we won and all I can say is that it's a surreal feeling."

He added: "The complexion of the race changed a few times. Saxon Warrior had first run on us but once my horse balanced out after the bend I always thought I'd get there."

Roaring Lion's victory was the third win for Gosden in this ten-furlong showpiece in the last six years, following on from The Fugue (2013) and Golden Horn (2015).

He was shortened to a best-priced 9-4 (from 3) for the Qipco Champion Stakes at Ascot on the back of his narrow victory, and Gosden's son Thady mentioned that October 20 Group 1 race as a possible target.

Connections, however, have also previously said that the Breeders' Cup Turf over a mile and a half will be given consideration, and the way that Roaring Lion has been finishing his races over a mile and a quarter certainly suggests he could cope with a step back up in trip at Churchill Downs in November.

Trainer Aidan O'Brien said of the gallant Saxon Warrior: "He has run a very good race. We knew he had come on since York.

"The plan before today was to drop him back to a mile in the Queen Elizabeth II Stakes and I'd imagine that is what we'll do if everything is okay with the horse."

FIRST PUBLISHED 6:46PM, SEP 15 2018
I had the right horse and this win in my home country means the world to me

Oisin Murphy to bid for Arc history on star Japanese mare Chrono Genesis Oisin Murphy excited to see if Dragon Symbol can burn past Battaash at Goodwood Oisin Murphy in red-hot form as four-timer extends lead in jockeys' title race Punters getting 'stuck into' Wonderful Tonight as storms threaten King George Oisin Murphy and Andrew Balding to star in major new racing documentary series Would you side with Snowfall or Love if they go head-to-head?