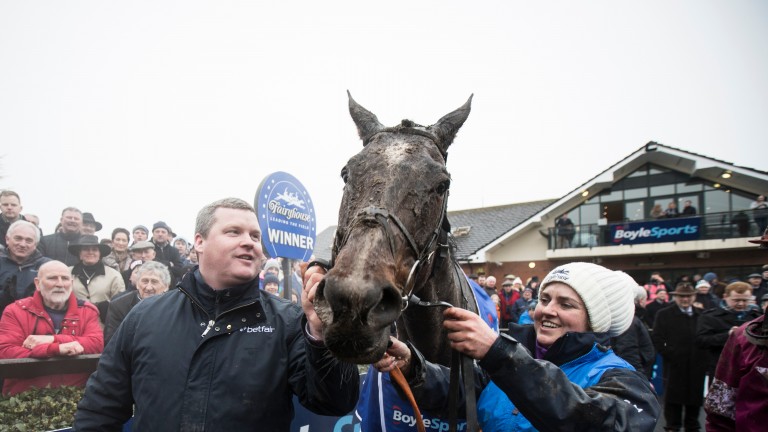 Gordon Elliott's world-record assault on his nation's richest jumps race paid off when General Principle pulled off a last-gasp victory in the BoyleSports Irish Grand National at Fairyhouse on Easter Monday, giving the trainer a much-desired first triumph in the showpiece.

Elliott, attempting to keep Willie Mullins at bay in the battle for the Irish jumps trainers' championship, fielded 13 runners in the €500,000 event which developed into a stamina-sapping slog in atrocious conditions.

And it was General Principle who fared best, putting his head in front on the line in the hands of 25-year-old JJ Slevin, from Enniscorthy, County Wexford, who was recording the biggest victory of his career.

A 20-1 chance, the Gigginstown House Stud-owned winner denied the Mullins-trained Isleofhopendreams (16-1) by a head with 20-1 shot Forever Gold half a length back in third at 20-1.

Elliott rounded off a memorable day when making it 200 wins for the season in Ireland as Portnablagh landed the bumper at Cork, and the trainer moved on to 201 with Getaway John's success in the Fairyhouse finale.

He said: "To train 200 winners in a season is unbelievable. I'm very lucky with the horses and owners I have, and the staff who work with me. It's a big team effort. I can't believe it to tell you the truth.

"Today has been unreal. The National was brilliant but it was a relief as well. You put yourself under so much pressure."

Bellshill, another Mullins runner, looked a major player for most of the journey, making much of the running. He appeared in control approaching the last but slowed into the fence and jumped left, interfering with Arkwrisht, who, in turn, hampered Folsom Blue.

Folsom Blue, who stayed on well for fifth, was promoted to fourth following a stewards' inquiry, with Bellshill demoted to fifth.

Mullins, like Elliott, had never won the Irish National, but Isleofhopendreams seemed set to end his hoodoo when charging home only to be denied in thrilling fashion by General Principle, who had finished fifth in the race 12 months ago. 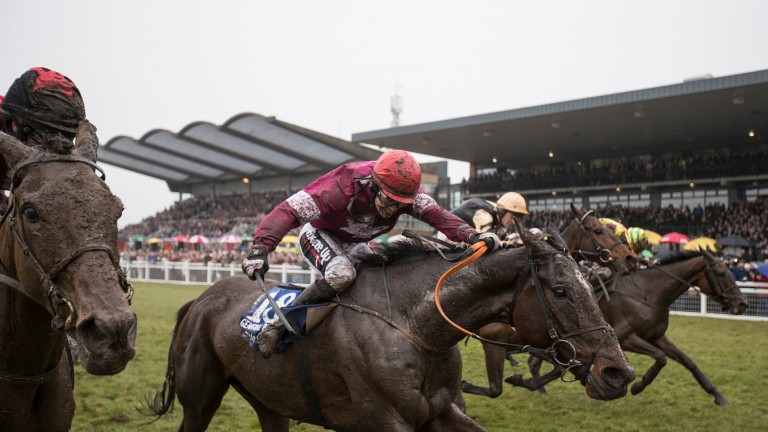 Winning jockey Slevin was slapped with a seven-day ban for using his whip with excessive force, while Danny Mullins, who rode the runner-up, picked up a three-day whip suspension for not giving his mount time to respond.

"General Principle tipped away and jumped lovely for JJ," said Eddie O'Leary, whose brother Michael – the Ryanair chief – owns Gigginstown, which was represented by ten runners.

"This horse wasn't getting three miles, now he's getting three miles and five. It just happened to happen for him and I'm over the moon for Gordon. It's a very lucky race for us – that's the fourth time we've won it – and while it's a wet day, it's a great day."

Elliott, who began the day some €450,000 clear of Mullins in his quest for a first trainers' title, saw that margin eroded to the tune of €117,000 by his big rival, who won the three Grade 2s on Fairyhouse's card, but struck back in devastating fashion, topping his lead up by €187,500 thanks to General Principle.

"We ran 13 and General Principle wasn't one of our leading candidates," Elliott said.

"He ran okay in the race last year and then lost his way. JJ gave him a smashing ride. It's unbelievable to win an Irish National at last. We were under a far bit of pressure but the result has made it a great day."

Robbie Power, last year's winning rider, was convinced his mount Folsom Blue would have gone close but for the interference he suffered at the final fence.

He said: "I think Folsom Blue would either have won or been beaten a short head. He was just coming with his run when we were knocked sideways and he stayed on well to the line.".

And Rachael Blackmore, rider of Arkwrisht who finished sixth, said: "My horse still had a bit left when we were brought to a standstill at the last."

Only eight of the 30 runners managed to complete the course in the very heavy conditions. Pairofbrowneyes, who was sent off the 13-2 favourite, fell at the fifth.

FIRST PUBLISHED 5:19PM, APR 2 2018
To train 200 winners in a season is unbelievable. The National was brilliant but it was a relief as well. You put yourself under so much pressure