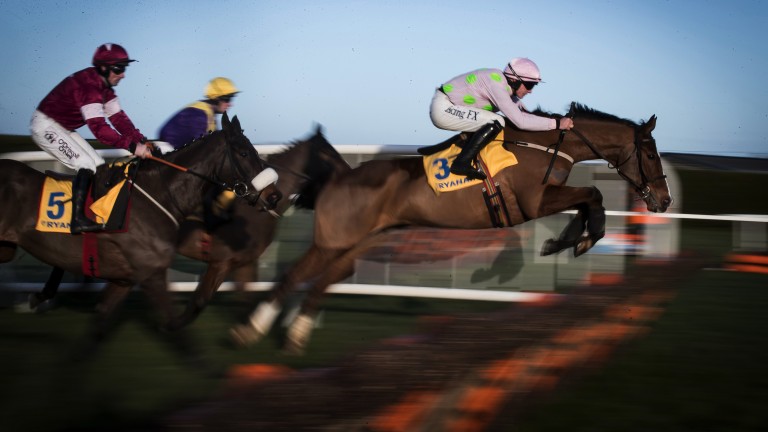 Faugheen (middle) clears a hurdle in the Grade 1 2m Ryanair Hurdle, although is eventually pulled up by Paul Townend before entering the home straight on the ﬁnal circuit
Patrick McCann (racingpost.com/photos)
1 of 1
By Tony O'Hehir UPDATED 5:40PM, DEC 31 2017

Connections and punters were scratching their heads and searching for answers on Friday night after nothing immediately came to light to explain Faugheen's dramatic flop in the Ryanair Hurdle, in which the 1-6 favourite was sensationally pulled up before the second-last flight.

The Willie Mullins-trained nine-year-old, who had been beaten only once previously and who was chasing a ninth Grade 1 victory, was dismounted by Paul Townend but was reported to be sound after the race. He was also reported to be "post-race normal" following veterinary examination.

Mullins reported: "Paul said Faugheen was very lacklustre from early on the race and was never travelling with his usual zest. He appears sound and wasn't distressed.

"It's all a bit of a mystery and we'll take him home and have our own vets check him out fully. I'd imagine we'll find something which will explain his very disappointing performance. His work at home had been fine and we had no worries coming here today.

"I thought he looked a bit cold in his coat in the parade ring before the race, but I just don't know why he ran the way he did."

Several bookmakers removed Faugheen from their Unibet Champion Hurdle lists, with Sky Bet going a best-priced 13-2 about the 2015 race winner, who had started the day a 2-1 shot.

This year's winner Buveur D'Air, so imperious in the Christmas Hurdle at Kempton a few days earlier, was cut into no better than 4-6 on Friday evening, having been a general 7-4 shot before Faugheen's flop. 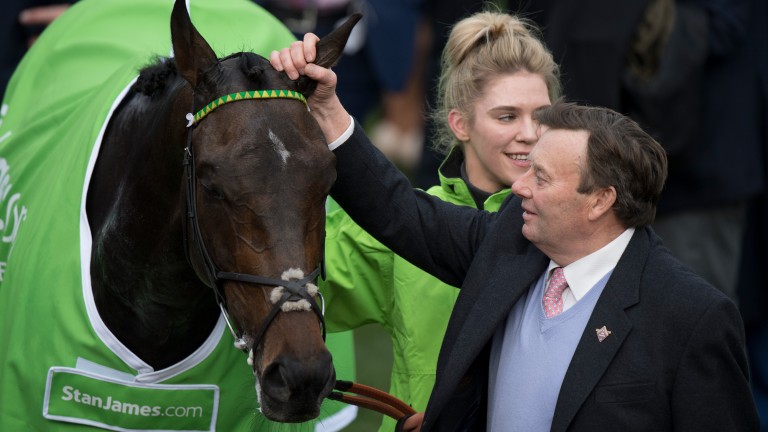 Faugheen's stablemates Melon and Yorkhill – who had disappointed over three miles in the Leopardstown Christmas Chase just 24 hours earlier – also had their prices shortened, with Melon now a general 8-1 chance (from 14) and Yorkhill 10-1 (from 16).

Joined by stablemate Cilaos Emery for the lead at the third hurdle on Friday and headed at the fourth, Faugheen quickly dropped out of contention after three out before being pulled up.

Ricci said: "That crowns what has been a bad week. Let's just hope the horse is still sound in the morning. Disappointed doesn't do justice to the way I'm feeling just now. Willie's horses have had a very mixed week."

While many of the Mullins big guns failed to fire, Ireland's champion trainer still mustered nine winners across Ireland's two four-day Christmas festivals – six at Leopardstown and three at Limerick.

FIRST PUBLISHED 6:01PM, DEC 29 2017
It's all a bit of a mystery and we'll take him home and have our own vets check him out fully. I'd imagine we'll find something which will explain it