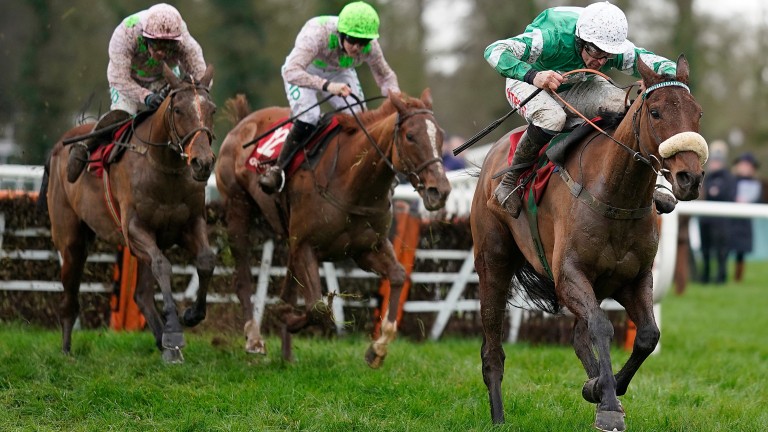 Presenting Percy: trimmed for the Gold Cup in March after victory at Gowran
Alan Crowhurst
1 of 1
By Brian Sheerin UPDATED 6:37PM, JAN 24 2019

Ireland's new racing superstar Presenting Percy lit up Gowran Park and tightened his grip at the head of the Magners Cheltenham Gold Cup market as he swaggered to victory on his long-awaited return to action in the Galmoy Hurdle.

On his first start since his electrifying performance in the RSA Chase, the Pat Kelly-trained eight-year-old was trimmed into a top-priced 100-30 (from 9-2) to record a third consecutive festival victory, this time in jump racing's most prestigious event.

Presenting Percy drew the sort of passionate crowd which has scarcely been seen on a racecourse in Ireland since Hurricane Fly was doing his thing at Leopardstown. He was applauded out on to the track and then cheered when he returned after landing the Galmoy for the second year in a row under Davy Russell.

A return to Gowran in three weeks' time for the Grade 2 Red Mills Chase, in which he finished second to Our Duke last season, is the most likely next destination for Presenting Percy, who also has an entry in the Unibet Irish Gold Cup at Leopardstown on February 3.

Owner Philip Reynolds said: "We've been patient with him and it's come off. We would have looked fools if it hadn't. People seem to love the horse and with it comes a responsibility. 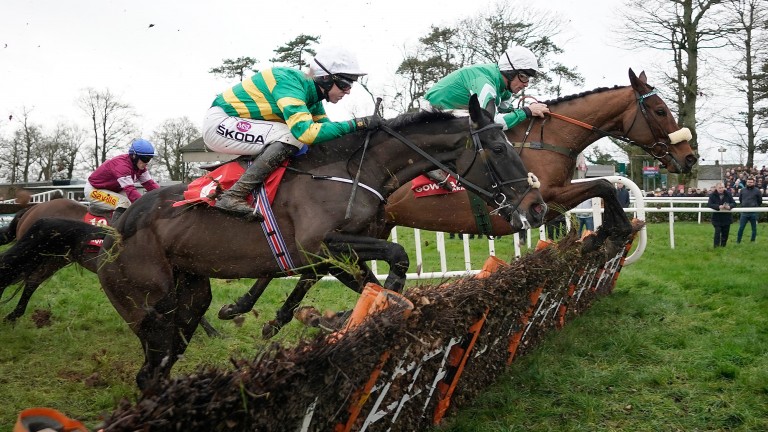 Presenting Percy (right): made a perfect return to action at Gowran
Alan Crowhurst

"I think he was fantastic today. To have a horse like this is incredible. Pat Kelly has only one day in mind for him so there is bound to be some improvement there."

Despite Presenting Percy's status as Gold Cup favourite, Reynolds raised the possibility of an alternative festival tilt at the Sun Racing Stayers' Hurdle.

Reynolds said: "Stayers'? He jumps a hurdle every bit as slick as he jumps a fence. We've been talking all year about 'what ifs' because of the ground.

"Is it my preference? Of course it's not. I'd like to get him back here in three weeks' time for the Red Mills Chase.

"If that doesn't work out, for whatever reason, we should keep all options open. He's ran in open company so he ought to have enough experience, and if we get the run into him the next day I think that should be enough.

"I'll only get one shot at this so I'm going to give him every chance I can, and if it doesn't work out this year, there'll be another year, I hope. But all roads still point to the blue-riband event."

Odds for the Stayers' were not as freely available, with Presenting Percy a general 2-1 chance (NRNB) with Sky Bet and Paddy Power.

Touching on the huge crowd the horse attracted and reflecting on the performance, Russell said: "We're in the heart of it here. Gowran touches four or five counties and they all seem to come out and support Gowran in general, but this race meeting especially.

"He nearly got a round of applause leaving the parade ring as well today! That's the beauty of National Hunt racing and we should be very proud of it as a country. He's a bit of a pro. He's been around, he's been to the festival twice and he's trained by a very professional man in Pat Kelly.

"I suppose the owner has to get a lot of credit as well, because you'd be getting itchy feet to run him, but Philip obviously went along and trusted Pat.

"He doesn't impress you riding him, he just does it. It doesn't really matter what grade he runs in, he just kind of does the same thing. He's never going to really impress you up on his back. He gave me a good feel the whole way through the race and we're very happy."

Russell added: "He has the Stayers' Hurdle as an option now, as well. If the Gold Cup turned out to be very competitive or if he didn't get a run over fences beforehand, he has that option anyway.”

Did you know you can bet via the Racing Post mobile app and website? Simply sign in with your favourite bookmaker via the Accounts button and then bet direct from our racecards

FIRST PUBLISHED 2:06PM, JAN 24 2019
He got a round of applause coming back into the winner's enclosure and he nearly got one on the way out to the track beforehand