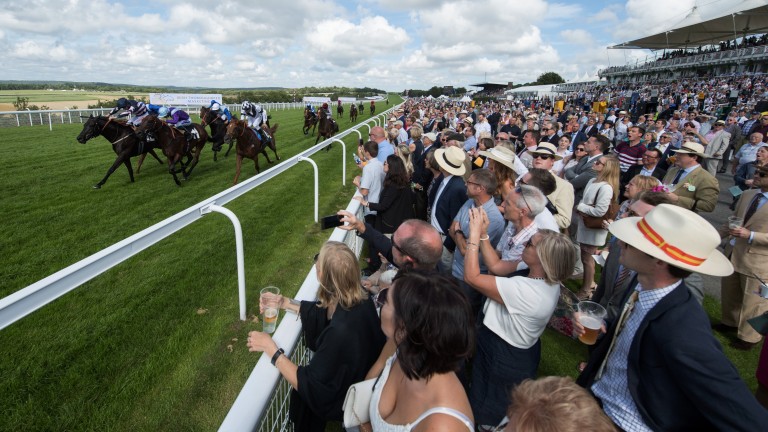 What a shock: Thechildren'strust (far side) holds on to win the 6f maiden under Hector Crouch
Edward Whitaker / racingpost.com/photos
1 of 1
By Lee Mottershead and Stuart Riley 12:27PM, AUG 2 2017

Ashley Head earned any amount of good karma by buying a two-year-old with Gary Moore and running it for charity for a year, and he seemingly cashed it all in at once as Thechildren'strust won on debut at Glorious Goodwood at 100-1.

The horse is running, and will be sold at the end of the season, to raise money for the charity after which he is named, and his sale could raise a great deal more than the £12,660 he earned here on his first start.

"We bought him for a bit of fun and he's raising money for the charity," said Head. "I'll auction him for the year at our function on November 6 and whoever buys him will have a lovely horse."

Given Head is giving all the prize-money to charity he deserved the 100-1 SP, but he revealed: "I didn't have a bet!"

Head's silks are more familiar to jumps fans, with horses such as Ar Mad – who could be campaigned at three miles this year – and he was keen to thank jockey Hector Crouch, who is in fantastic form of late having ridden a four-timer at Lingfield on Saturday evening.

There was a sad postscript to the race as the Richard Hughes-trained Hell Of A Band fractured his shoulder and had to be put down.

Connections over the moon with El Astronaute

El Astronaute returned to winning ways with a tenacious display in the £30,000 5f handicap and trainer's John Quinn's daughter Kelly was on hand to collect the trophy.

She said: "I'm absolutely delighted for [owner] Mr [Ross] Harmon, he's a superstar and Jason [Hart] gave him a lovely ride. His last run wasn't great but he got dropped a pound, which helped, and that was the real him today."

Thought for the day
British festivals like to start with a bang and by having the Vintage Stakes and Goodwood Cup either side of the Lennox, day one of Glorious Goodwood now has a start to match its rivals.

FIRST PUBLISHED 6:35PM, AUG 1 2017
I will auction him for the year at our function on November 6 and whoever buys him will have a lovely horse