Twenty for 2020: 20 sports betting tips for the biggest events of the new year 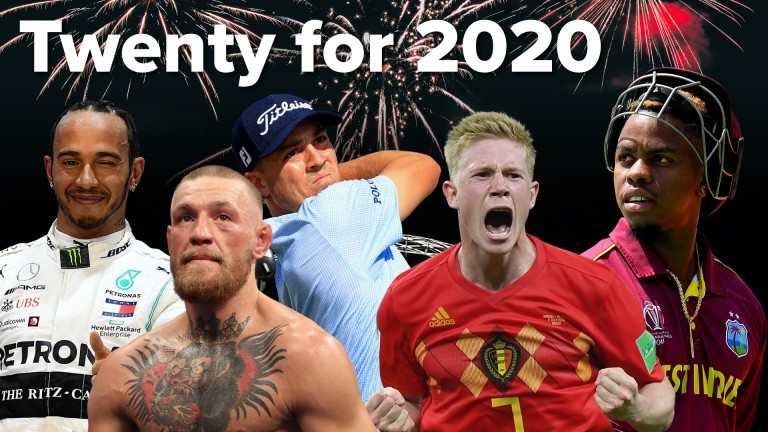 Racing Post Sport's team of experts give their best ante-post bets for 2020.

Belgium blitzed Euro 2020 qualifying with ten wins in ten games, 40 goals scored and only three conceded and the spine of the team is brimming with quality in Toby Alderweireld, Youri Tielemans, Kevin De Bruyne and Eden Hazard.

They can ease through a mediocre group and should draw confidence from their third-place finish in the 2018 World Cup. Liam Flin

A squad of Tottenham’s strength - who achieved a Champions League berth and made the final of the continental competition last term - should not be fazed by juggling a top-four pursuit with a run in the FA Cup.

Jose Mourinho has won the premier domestic cup competition in every country he has managed in and also led Manchester United to League Cup and Europa League titles. He is well versed when it comes to knockout football and Spurs look the value. Liam Flin

Paris St-Germain have not got past the quarter-finals of the Champions League since 1995 but can write a new page in their history by winning the competition this year.

PSG have one of the best attacks in Europe and are dominant in their domestic league, allowing them to focus fully on European nights.

Manchester City and Liverpool can deliver a strong English challenge but have tough round of 16 ties against Real Madrid and Atletico Madrid. Dan Childs

Inter are giving Juventus a run for their money in the Serie A title race and have a great chance of going all the way in the Europa League.

Antonio Conte has a strong squad and his team should comfortably get past Bulgarian champions Ludogorets Razgrad in the round of 32.

All of the English challengers – Manchester United, Arsenal and Wolves - have a decent chance and Scottish contenders Rangers and Celtic will be hopeful of getting past respective knockout stage opponents Braga and FC Copenhagen. Dan Childs

Brazil won their ninth Copa America title in their own backyard in 2019 and can make it back-to-back successes in 2020.

They lifted the trophy without star player Neymar last time and should have too much going forwards with Gabriel Jesus and Roberto Firmino for any nation jetting off to Argentina and Colombia. Liam Flin

The next generation may finally be arriving in the NFL with quarterback sensation Lamar Jackson - as dangerous running the ball as when he throws it - well placed to lead Baltimore to Super Bowl glory.

Champions New England have looked ponderous for most of the season and a stronger challenge in the AFC could come from the crackerjack Kansas City offence led by Patrick Mahomes.

New Orleans look set for a strong challenge in the NFC with early trailblazers San Francisco running into injury problems at the wrong time. Phil Agius

And, to make it even better, the bookies can hardly separate them - what more could you want? Dan Williams

Hosts Australia are worthy favourites to claim their first Twenty20 global title but the West Indies could represent better value at 9-1 in their favourite format.

The Windies, World T20 champions in 2012 and 2016, will be captained by the inspirational Kieron Pollard and have some stunning Twenty20 talents in their ranks, including all-rounder Andre Russell and young batting stars Shimron Hetmyer and Nicholas Pooran. James Milton

Colombia’s Egan Bernal won his first Tour de France earlier than even he expected in 2019 and the young cycling star should have a great chance to score back-to-back successes.

The Team Ineos ace is set to skip the Giro d’Italia again this season and could defend his Paris-Nice and Tour of Switzerland crowns before Le Tour.

Until Ferrari or Red Bull burn up the track in pre-season testing, the sensible policy is to assume Lewis Hamilton will again be the man to beat as he targets a record-equalling seventh world title.

His Mercedes teammate Valtteri Bottas won't beat him in a straight fight, but there could be support for Max Verstappen at Red Bull now the Honda engine is greatly improved.

Young gun Charles Leclerc will lead the Ferrari challenge - although his growing rivalry with teammate Sebastian Vettel could be a hindrance - and the team have gone back to the drawing board this year so might suffer from a slow start. Phil Agius

Augusta National is a course which typically takes plenty of getting to know – debutants have an appalling record there – and Justin Thomas appears to have served his apprenticeship. Progressive Masters form figures of 39-22-17-12 could easily have a W added to them in April.

The A-game of Thomas is good enough to rival anyone in the sport and he is best suited to tracks where he can be aggressive and employ his power to great effect. Augusta fits that category and he has churned out greens in regulation there in previous spins, suffering with a cold putter.

If Thomas, an 11-time PGA Tour champion and winner of the 2017 US PGA, arrives for the Masters with some flat-stick form this year, the Green Jacket can be his, and he looks the stand-out value at 20-1 at this stage. He has finished in the top-20 in his last ten events, winning two of them. Steve Palmer

The career of Dustin Johnson has stalled slightly, with Brooks Koepka, Rory McIlroy, Jon Rahm and Justin Thomas moving ahead of him in the world rankings, but by July the DJ could be playing a winning tune once again.

Johnson is far too good to be stuck on just one Major victory for much longer and Royal St George’s, where he finished second to Darren Clarke in the 2011 Open, may be the venue where he doubles his tally.

Johnson is a 20-time PGA Tour champion who has finished runner-up four times in Major competition. This could be the year he adds the Claret Jug to the US Open Trophy he won in 2016 and he is a more than fair price. Steve Palmer

Home advantage counts for so much in the Ryder Cup and any punters looking to invest at this stage are advised to back the USA.

There are so many imponderables to betting on the Ryder Cup so far in advance – even in the week of the event punters are guessing on pairings – but the United States are a fair price for the Whistling Straits shootout.

Six of the last seven Ryder Cup matches – and nine of the last 11 – have been won by the home side.

The States, fresh from a confidence-boosting fightback to win the Presidents Cup, should be at least 4-7. Steve Palmer

Usain has bolted from the scene and the blue riband event at Tokyo 2020 will go to a new champion.

America's Christian Coleman is the odds-on favourite in places for the men's 100m gold, but he looks worth opposing with teammate Noah Lyles.

The 22-year-old Lyles has tremendous potential and has confirmed he is targeting a sprint double having won 200m gold at the 2019 World Championship.

Great Britain's Dina Asher-Smith is a 5-1 chance for the women's gold. Phil Agius

World Cup runners-up England are the 5-6 favourites and are in a strong position given main rivals Ireland, Wales and France, the only other countries to have won the title, all start the year under a new coach.

Of those challengers France could be the most interesting given they have three home matches, starting with England in round one. New head coach Fabien Galthie had been number two to Jacques Brunel for the last year and has been bringing through some exciting young talent.

Les Bleus are interesting 8-1 shots to win the tournament, while given the managerial changes, the 5-4 offered about no team winning the Grand Slam may also attract backers. Graham Woods

No markets have yet been issued on players to reach the final of the World Championship but with John Higgins having made the title match in the last three seasons it's a bit of a no-brainer about the veteran Scot being value to make it four on the spin.

Trying to second-guess when Higgins will pop up at other times in the season is a tough task, but of the three majors the Wizard of Wishaw places considerably more importance on his annual trip to Sheffield than his visits to York and London.

Higgins is a four-time world champion so has nothing to prove as regards the tournament and while the only player to properly thrash Higgins at the Crucible was Judd Trump in last year's final, there's no certainty that the Ace in the Pack will break the venue's curse and successfully defend a maiden title there. Adrian Humphries

Novak Djokovic won his seventh Australian Open singles crown with ease last season when thrashing Rafael Nadal 6-3 6-2 6-3 in the final and there looks little to prevent him taking an eighth crown in Melbourne.

There may be only one serious danger to the super Serb and that is Daniil Medvedev.

The Russian lost in four sets to Djokovic in the last 16 in Melbourne last year, but Medvedev stepped up on that in 2019 with some scintillating performances and it’s no surprise to see him sharing third-favouritism for the season’s opening major with Roger Federer. Adrian Humphries

Djokovic has been the dominant grass-courter in recent seasons, but the Serb will count himself fortunate to have defeated Roger Federer in last year's final of the London major.

Federer won his eighth Wimbledon singles crown in 2017, five years after his seventh. But he had match points to defeat Djokovic in the 2019 final and given how close that clash was, there looks every chance the Swiss veteran can notch another triumph should the pair clash again.

Stefanos Tsitsipas could prove a threat to Federer, but the Greek ATP Finals champion has done his best work indoors. Adrian Humphries

‘Notorious’ Conor McGregor achieved plenty of notoriety away from the sports arena during 2019 but he is determined to get back to doing what he does best in 2020 - beating people up inside the UFC’s Octagon.

He has mapped out a three-fight strategy over the next 12 months to take him back to the top of MMA and first up is grizzled veteran 'Cowboy' Cerrone, who has lost six of his last ten fights but still represents a decent test.

McGregor hasn’t won a fight since he beat Eddie Alvarez for the UFC lightweight title in November 2016, but he seems hell-bent on proving he still has what it takes and a focused Conor is a force to be reckoned with. Dan Williams

Tip: Conor McGregor to win in round two