Steve Bruce may have to settle for a draw 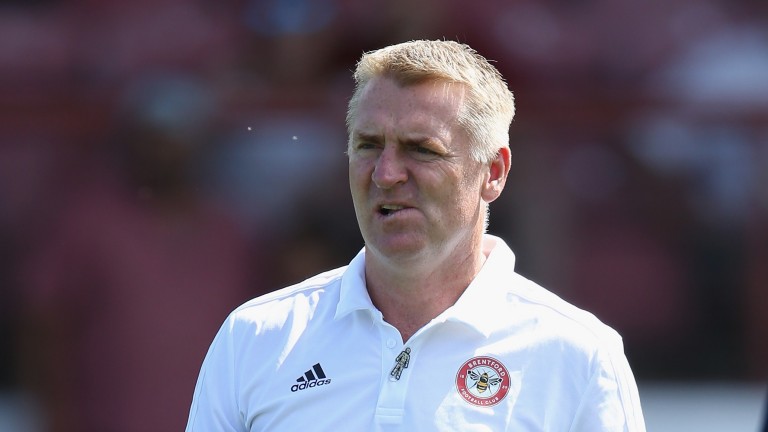 A slow start ruined Brentford's promotion aspirations last season as they failed to win any of their first eight league games. But they have hit the ground running in 2018-19, taking seven points from nine, and can stay unbeaten by drawing at Aston Villa.

The Bees moved up to fourth with Sunday's convincing 2-0 victory at home to Sheffield Wednesday and are getting a lot of respect from the markets.

They are only marginal outsiders to overcome last season's losing playoff finalists, who have also dropped just two points.

Brentford stood up well to a major test in their first away game at Stoke, dominating for large parts of a 1-1 draw.

In each of their first three games they have had more possession and more shots than the opponent and their cumulative shot count statistics are 45 for and just 22 against.

If the Londoners keep playing in such a positive fashion the points should continue to pile up and there is every chance of them returning to the top six for the first time since 2014-15.

Villa have had to work much harder for their gains.

They scored twice in the last 20 minutes to defeat Hull 3-1 in an evenly contested match and needed a 90th-minute Birkir Bjarnason goal to see off Wigan 3-2 at Villa Park.

Their luck ran out at Ipswich on Saturday where they were held to a 1-1 draw despite playing for over half of the match against ten men.

It was a poor performance against a side widely expected to be battling against relegation and might have given manager Steve Bruce food for thought as he considers making a few loan acquisitions before the end of the month.

Johnstone's replacement, Orjan Nyland, made a dreadful error in the draw at Ipswich and Grabban's goals (eight in 15 league games) have not been replaced.

Brentford have also seen key players depart with John Egan joining Sheffield United and Florian Jozefzoon moving to Derby, but they are very smart operators in the transfer market and their squad looks stronger than ever.

Two of last season's summer signings, centre-forward Neal Maupay and attacker Ollie Watkins, have improved a lot over the last 12 months and will be feeling confident after scoring three goals each from the opening three games.

The way Brentford are playing they will not fear any second-tier side.

However, Villa away is one of the toughest games they will face all season and a draw might not be seen as a bad result for either party.

Brentford
Rico Henry (knee) has been out long-term and Emiliano Marcondes is two weeks away from returning from injury.

Key stat
Brentford have lost one of their last 13 matches.