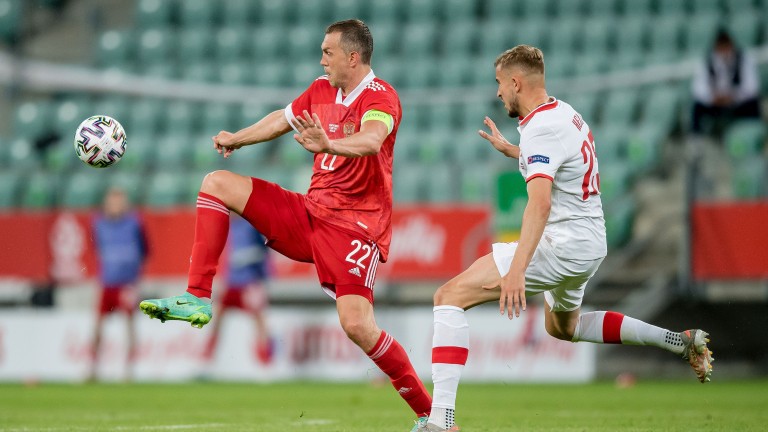 Russia were the lowest-ranked team going into their home World Cup in 2018 and manager Stanislav Cherchesov started the tournament under pressure after a poor run of results and some controversial selection decisions.

Their surprise run to the quarter-finals, including a last-16 victory over Spain, means Cherchesov still has plenty of credit in the bank with Russia fans and the moustachioed former Spartak Moscow and Dynamo Dresden goalkeeper has a contract until after the 2022 World Cup.

Russia's World Cup was ended by a penalty-shootout defeat to runners-up Croatia and they kicked on with an impressive Euro 2020 qualifying campaign, losing twice to Belgium but winning their other eight games in Group I.

Their results since sealing their place at the finals have been patchy so Cherchesov's men, third favourites to win their group, are not carrying a huge weight of expectation.

Last autumn's Nations League campaign began with wins over Serbia (3-1) and Hungary (3-2) but ended with a 3-2 defeat to Turkey, where they were reduced to ten men in the 24th minute, and a 5-0 drubbing by the Serbs.

After beating Malta and Slovenia in their first two World Cup qualifiers in March, Russia lost 2-1 to Slovakia, extending their poor defensive record to 16 goals conceded in nine competitive internationals since the start of 2020.

Cherchesov must find the right balance in defence but he does have some attacking talent with Aleksandr Golovin, Aleksei Miranchuk and World Cup hero Denis Cheryshev playing off powerful Zenit St Petersburg striker Artem Dzyuba.

Russia beat Saudi Arabia 5-0 in their opening game of the World Cup but they can expect a far tougher start against Belgium. Their clashes with the Red Devils and Finland both take place on home turf at Zenit's Krestovsky Stadium, however, so perhaps Cherchesov can rekindle the spirit of 2018.

Manager - Stanislav Cherchesov: The former national team goalkeeper managed eight clubs in just 12 years before taking charge of Russia in 2016. The run to the 2018 World Cup quarter-finals won over his critics but more recent results have been patchy and Cherchesov lacks the personnel to play expansive football.

Prospects: Cherchesov has named a relatively youthful squad, by Russian standards, and recent qualifying and Nations League results have been solid if unspectacular. However, a poor defensive record suggests that third place in the group could be the limit especially as rivals Denmark have home advantage for their crucial meeting in the final round of fixtures.

Inside info - Vadim Borisov, Sport24: Russia have high hopes for the tournament since two of their three games in the group stage will be played in St Petersburg.

If the squad is able to qualify from the group and play more than one knockout game, it’s going to be a massive success. Despite poor results in two previous Euros, the current roster has the right mix of youth and experience to achieve this goal.

Not got a SkyBet account? Sign up today and get £30 in free bets when you place a £5 bet

FIRST PUBLISHED 6:07PM, JUN 12 2021
Russia kicked on with an impressive Euro 2020 qualifying campaign, losing twice to Belgium but winning their other eight games in Group I