Markku Kanerva's debutants hope to cause a stir in Group B 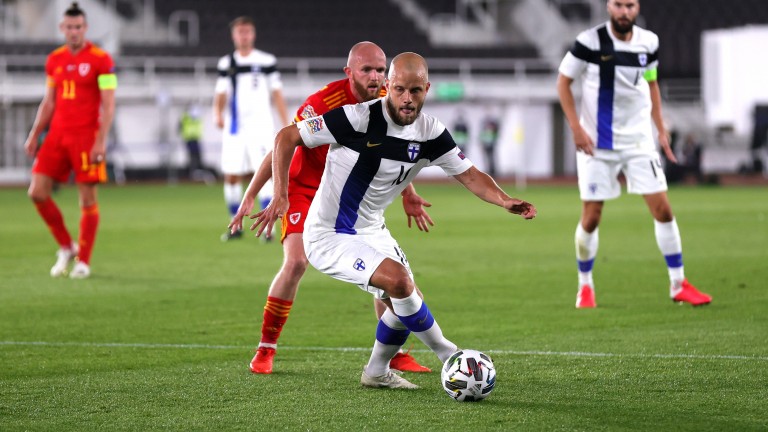 Iceland lit up Euro 2016, reaching the quarter-finals of their first major tournament, and this summer's debutants Finland will be hoping to make a similar impact.

The Finns sealed qualification with a 3-0 home victory over Liechtenstein in November 2019 – part of a remarkable run of 11 wins to nil in 14 fixtures on their own patch.

They extended that proud defensive record in last year's Nations League, conceding just one goal – a penalty – in home and away wins over both Bulgaria and Ireland.

Even world champions France couldn't find a way past Markku Kanerva's men, who landed an 18-1 shock by beating Les Bleus 2-0 in Paris in a friendly last November.

Finland are a similar price to top Group B but their performances over the past couple of years suggest they can make things difficult for their section rivals.

Their victory over France was all the more impressive given that Bayer Leverkusen goalkeeper Lukas Hradecky was rested and Norwich striker Teemu Pukki, scorer of ten of their 16 goals in Euro 2020 qualifying, only came off the bench for the last ten minutes.

Hradecky and Pukki, if fully recovered from an ankle injury, provide Finland with star quality at either end of the pitch but the majority of their squad members play their club football in Europe's less distinguished leagues.

Coach Kanerva has been part of the national-team set-up for 15 years, leading the Under-21 side to the European Championship finals for the first time in 2009, and he must ensure that Finland's team is greater than the sum of its parts.

Home advantage has been a big factor in their recent progress so their task is made tougher by the fact that they effectively face away games against Denmark and Russia in Group B.

Still, having beaten the world champions in their own backyard, the Finns are unlikely to be overawed by trips to Copenhagen and St Petersburg.

Manager - Markku Kanerva: The 57-year-old won 59 international caps as a centre-back and has been in charge of the national team since 2016. Kanerva stresses the importance of defensive discipline, whether in a 4-4-2 or 5-3-2 formation, and believes a counter-attacking approach suits his players best.

Prospects: The Finns have shown commendable defensive grit in the last couple of years but home advantage has been a major part of that success. They can make things difficult for Denmark and Russia but will need Norwich's Pukki to be fit and firing after a gruelling Championship campaign if they are to get out of the group.

Inside info - Lars Sivertsen, Nordic football expert: I spoke to someone at the Finnish FA and he was quietly confident the team could replicate Iceland's success at the last Euros.

Like Iceland, Finland have invested in indoor facilities but I think the Icelandic side was stronger.