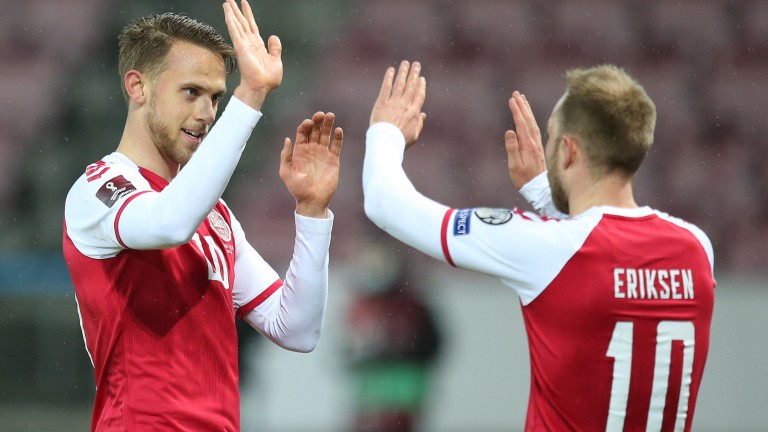 When Denmark won Euro 92, 13 members of their 20-man squad played for clubs in their homeland but the current crop of Danish stars are scattered across Europe's top leagues.

Ace playmaker Christian Eriksen won the Scudetto with Inter this season, skipper Simon Kjaer is across town at Milan, and Martin Braithwaite's baffling career path has taken him from Middlesbrough to Barcelona in recent years.

Yussuf Poulsen (RB Leipzig), Thomas Delaney (Borussia Dortmund) and and Joakim Maehle (Atalanta) helped their clubs to top-three finishes this term and Kasper Schmeichel, whose father Peter was part of Denmark's class of 92, lifted the FA Cup with Leicester.

There is a significant Premier League contingent in Kasper Hjulmand's squad. Schmeichel and Tottenham midfielder Pierre-Emile Hojbjerg are joined by centre-backs Andreas Christensen (Chelsea), Jannik Vestergaard (Southampton) and Joachim Andersen, who spent 2020-21 on loan at Fulham.

Hjulmand replaced the out-of-contract Age Hareide only last year but the handover was made easier by the wealth of experience in the camp.

The Danes have won only three matches at European Championship finals since their 1992 victory and the pragmatic Hareide rarely released the handbrake during qualifying.

Seventeen of Denmark's 23 goals came in three games against Georgia and Gibraltar while they drew twice against a limited Ireland side, dropped points in a goalless stalemate in Georgia, and needed three goals in the last six minutes to earn a 3-3 draw with Switzerland.

The Danes demonstrated their defensive resolve in the Nations League under Hjulmand, drawing 0-0 at home to England and winning the reverse fixture 1-0 after Harry Maguire's first-half red card, and they should prove hard to break down.

Eriksen's resurgence at Inter is a huge boost for Hjulmand, whose side won their first three World Cup qualifiers against Israel, Moldova and Austria by an aggregate score of 14-0 in March.

That suggests the traditionally dour Danes could sparkle at these finals and their big-game experience makes them a threat to the top teams.

Manager - Kasper Hjulmand: The former Mainz and Nordsjaelland coach succeeded Age Hareide last year and is keen to add some attacking flair to the Danes' solid defence. Hjulmand has some exciting wide players in the squad and his 4-2-3-1 formation can swiftly turn into a 4-3-3.

Prospects: Hjulmand has a settled squad made up of players from Europe's top leagues and there is a nice balance to the first 11. Denmark are certainly capable of beating Finland and Russia in Copenhagen and their defensive quality could make them awkward opponents in the knockout stages.

Denmark have the advantage off playing all three of their group matches at home and they feel that could play a big role in helping them qualify from the group….after that, anything can happen!