All 32 NFL teams ranked from best to worst 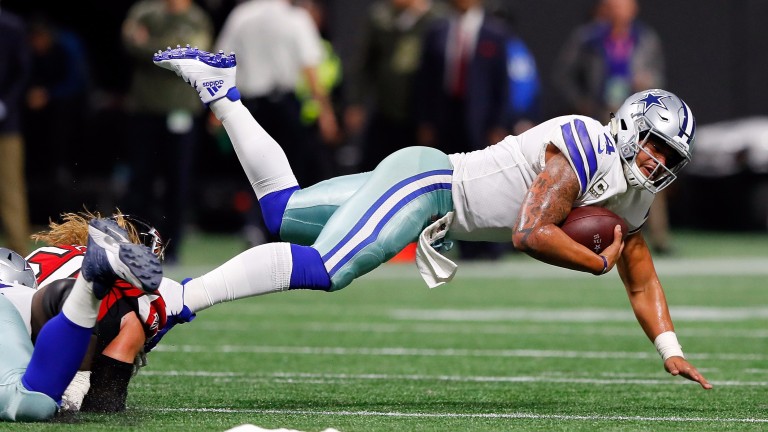 The Patriots had another comfortable evening in Denver and look to be storming their way into the playoffs. They are behind Pittsburgh in the race for the AFC's number-one seeding, but they will have home advantage firmly in their sights with a Week 15 meeting with the Steelers to come.

The Eagles are back from a well-earned bye week and face their biggest game of the season. Seeing the Cowboys crash in Atlanta last week should make them confident of extending their NFC East lead.

The Steelers made hard work of seeing off the Colts but they are so firmly in control of the AFC North that they should have their eyes on the post-season already. Apart from their meeting with the Pats, the rest of their regular-season should be comfortable.

The Vikings have chalked up five straight victories and look powerful on both sides of the ball. Their post-season credentials look set to face a tough test against the Rams in what looks the best game of the week.

It is hard to ignore the credentials of a team who have won seven straight times and blew away the Bills on Sunday. Don't expect them to take their foot off the gas as they still have four key divisional games on their schedule.

The Seahawks claimed their fifth win in six matches against the Cardinals but it came at a cost with star cornerback Richard Sherman suffering a season-ending Achilles injury, so they will have to cope with that.

The Chiefs were off last week and it was timely after three defeats in their last four outings. Defeat to the dismal Giants cannot be entertained, but Buffalo are the only team they have left to face who have a winning record so they can be expected to get over their rough trot.

8 Atlanta Falcons (up one)
Record: 5-4
Last week: Won 27-7 at home to Dallas
This week: Three-point underdogs at Seattle

A win over the Cowboys should have increased optimism in Atlanta, who set themselves high standards by reaching the Super Bowl last season. A win this week could put them right back in the hunt as they have five divisional games in their remaining seven matches.

It could still be a three-way battle in the NFC South and the Panthers are a big factor having claimed seven wins. Cam Newton was back to his best against the Dolphins and further improvement from the quarterback could lead to exciting times.

The Rams continue to flower and although it took them a while to get into their stride against the Texans, they posted another excellent victory. A visit to Minnesota and a clash with the red-shot Saints mean the next two weeks could be crucial, as they still have to go to Seattle.

It could have been a lot different for the Titans as victories in their last three games have been by three, three and four-point margins, all against AFC North opposition. The Steelers will be a much tougher test, but alongside a Week 16 clash with the Rams, it is the hardest fixture they have left.

The Cowboys were confident they could cope without the suspended Ezekiel Elliott, but there was little sign of that in their defeat against the Falcons. The running back is out for another five weeks (barring further legal developments) and that has made the clash with the Eagles even more important. Defeat would be a disaster.

The Raiders were off after getting back to winning ways against Miami, but they have plenty of work to do and the tough nature of their fixtures - they still have Kansas City, Dallas and Philadelphia to play after their trip to Mexico - suggests it could be a difficult finish to the campaign.

The Jaguars limped over the line against the Chargers last week and although their record is strong, they are not convincing with quarterback Blake Bortles at the helm. They cannot take their playoff challenge for granted even if their remaining schedule appears manageable.

The Lions finished strongly with the final 21 points of the game to get away from the Browns last week and scored more than 29 points for the second consecutive game. They look Minnesota's chief rivals in the NFC North and face the Vikings at Ford Field next week.

The Packers showed they can win without Aaron Rodgers when they saw off the Bears last week. However, they have tougher tests to face and, bearing in mind their injuries, an 8-8 record would be a decent achievement this year.

The Bucs grabbed a win against the Jets, who had been showing signs of life recently and Ryan Fitzpatrick was solid against his former team in place of injured quarterback Jameis Winston. The damage may have been done for this season, though.

The Broncos' fall continues as they were unable to show much resistance against New England. Their celebrated defence have conceded 121 points in their last three outings and they look to be heading nowhere fast.

They attempted a spirited comeback against the Vikings, but Washington's predicament is that they have struggled in their divisional matches. They are still capable of handing someone a bloody nose, though.

That's two dismal defeats in a row for the Bills, who looked primed for a playoff push a fortnight ago and quarterback Tyrod Taylor has surprisingly been benched for rookie Nathan Peterman this week. The AFC East title looks beyond them, even though they have two games to come against New England, and they need to snap out of their poor run quickly.

The Cardinals' four wins have come against teams who have just eight wins between them, so it would be a surprise if they could up their game against better opposition. However, there is still scope for them to gain a few more wins. Blaine Gabbert could start at QB this week in place of Drew Stanton.

The Ravens had the week off and still have four home games to play after this week's trip to Lambeau Field. It is difficult to see them doing enough to give Pittsburgh much to worry about.

This was the week the Dolphins should have been having their bye had they not been hit by Hurricane Irma and they could probably do with a rest. They have four divisional clashes left but it is difficult to see them making the post-season this time.

The Texans have lost their way since DeShaun Watson suffered his knee injury a fortnight ago and they are slipping out of contention in the AFC South. They are just not the same force with Tom Savage at quarterback.

In a season of hard-luck stories, the Chargers will wonder how on earth they slipped up against the Jaguars, after fumbling late on just when they just needed to keep the ball to win. That would have given them a huge boost but now they have to pick up the pieces. Quarterback Philip Rivers suffered a concussion - Kellen Clemens is his back-up.

The Colts will reflect on a decent performance against the Steelers when they had the AFC North leaders rattled for much of the game. Victories over Tennessee and Jacksonville immediately after their bye week could still make them a factor in an open division.

It was back down to earth for the Jets as a late touchdown put a gloss on their defeat at Tampa Bay. They have won more games already than many observers anticipated but a difficult schedule means they may not win many more.

There were flashes of promise from quarterback Mitchell Trubisky last week but losing to a Rodgers-less Packers will have to go down as a disappointment. They can start preparing for next year if they losing to the Lions on Sunday.

The Bengals are still not scoring enough points to be a factor in the AFC North. They have eclipsed 30 just once and that was against winless Cleveland, so it is difficult to anticipate a rapid improvement.

A win over the 49ers would have at least provided the Giants with a tonic, but defeat leaves them navel-gazing once more and questions about Eli Manning's future are surfacing. A changing of the guard may not be far away.

It is all about tiny steps of improvement under Kyle Shanahan at San Francisco, so the first victory is something of a landmark. They have a week to revel in it before a tough home clash with Seattle, but forthcoming trips to Chicago and Houston provide them with further chances to push up the list.

The Browns were competitive for three quarters against Detroit but again they couldn't finish the job. Their remaining schedule includes matches against Cincinnati, the Chargers, Green Bay, Baltimore and Chicago, so they still have chances to avoid a 0-16 season even though linebacker Jamie Collins is out for the season. Wide receiver Corey Coleman's return from injured reserve provides a welcome boost.