Tony Bellew can beat David Haye for a second time 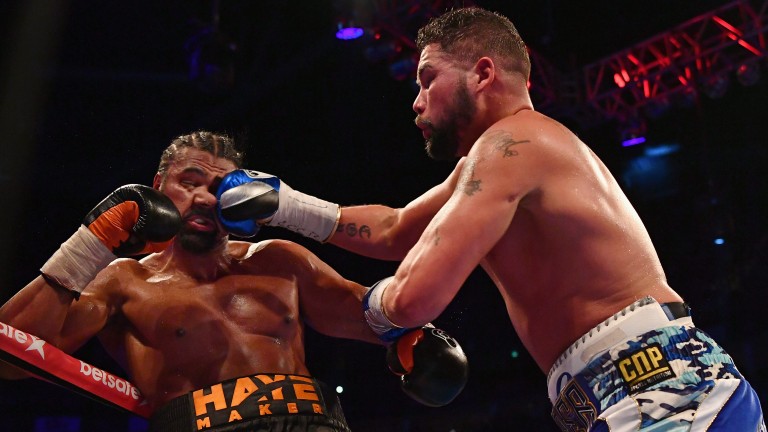 Tony Bellew upset the odds to beat David Haye last year and Bomber is value to defeat the Hayemaker again in their rematch at the O2 Arena in London on Saturday night.

Bellew's odds are around half what they were when he was advised by Racing Post Sport to win their first fight - 9-2 then, 9-4 now - but he could still prove good value as Haye has no form to back up his price, and only his word to back up his fitness.

It would be a huge mistake for punters to confuse the 2018 Hayemaker with the version who dominated the cruiserweight division and became a world heavyweight champion.

That first contest with Bellew is the only meaningful fight Haye has had in the last five and a half years and it ended in absolute disaster with Haye bloodied and battered through the ropes with a ruptured Achilles and a white towel of surrender thrown from his corner.

Haye spent much of the build-up to that fight taking about "Haye 2.0" but the hardware malfunctioned in the sixth round leaving him staggering around the ring, barely able to stand.

To Haye's credit he showed incredible courage to fight on until the 11th before Bellew finished him off, but his career had been blighted by injuries and something similar could happen again.

Haye was twice scheduled to face Tyson Fury, but both times had to pull out due to injuries. After the second time he required shoulder surgery and was told by doctors he should never fight again.

This rematch was originally set for December but Haye was forced out after tearing his bicep falling down some stairs.

However, even if Haye is fully fit he may need to produce one of the best performances of his career to beat Bellew.

Former WBC cruiserweight champion Bellew has been active at world level for several years and is a proven 12-round fighter.

Since July 2012 Bomber has had 14 contests, including three world title fights and one European, while Haye has had only the defeat to Bellew and a couple of nothing fights against journeymen.

That may be the case, but we have heard it all before. Many punters will take him at his word and back him to win at odds of around 1-2, but sports history is littered with such claims and few rediscover the magic of their youth.

Haye also says he will not look for the early knockout like he did last time and instead try to take Bellew into the later rounds. That would likely be a big mistake as even in his early career Haye had issues with stamina.

His three biggest attributes are speed, timing and power, but age and ring-rust bring the first two into question, and though the power remains he hit Bellew with his best shots in the first meeting and 'fat Scouser', as Bellew referred to himself, didn't go down.

Haye could win by KO, which is a shade of odds-on, but Bellew has nothing to fear and he looks a value bet for a repeat victory.