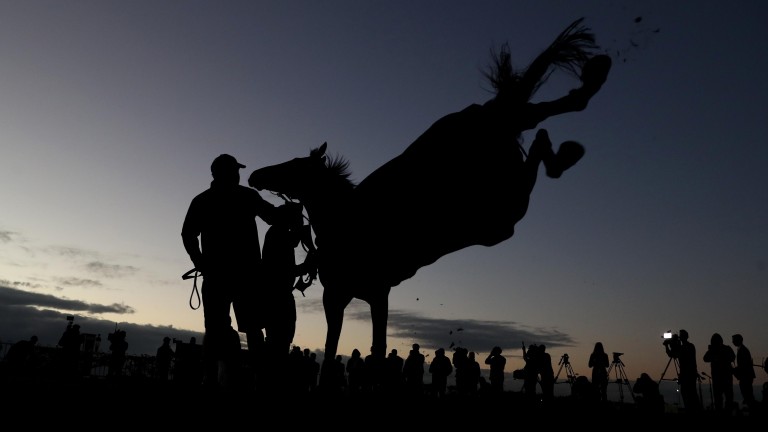 The final racecourse gallop of Winx's remarkable career was followed by dramatic scenes at Rosehill on Thursday when the sport's biggest equine star kicked a sign attached to metal railings, requiring her to undergo an official veterinary check.

A large media entourage descended on the Sydney track, where Winx exercised under Hugh Bowman in advance of her swansong appearance in Saturday's Longines Queen Elizabeth Stakes.

The record-breaking mare – triumphant in her last 32 races – was characteristically calm when parading in front of camera crews but began to misbehave as she left the paddock, rearing up and lashing out from behind, at one point almost connecting with trainer Chris Waller.

The moment the racing world held its breath when @winx_horse lashed out and kicked a fence after her last workout ahead of the Queen Elizabeth Stakes at @royalrandwick on Saturday @RacenetTweets pic.twitter.com/SQpm8vULFd

Winx's unruliness was blamed by Waller on his decision not to equip her with earmuffs, while he also believed a rug resting on her bottom proved annoying.

Speaking after Winx had returned to his stables at Rosehill, Waller said: "The farrier has already called to say she is 100 per cent.

"It's good that people can see how much energy she has got. I can't explain how well she is. As Hughie [Hugh Bowman] said, she has never been better."

A statement was released by Racing New South Wales, which said: "Racing NSW official veterinarian Dr James Mizzi and stable veterinarian Dr Ross Alexander this morning conducted a detailed lameness examination of Winx following the mare kicking out in the mounting enclosure at Rosehill Gardens and her hind legs making contact with a sponsor sign attached to a gate.

"Dr Mizzi and Dr Alexander have reported that Winx was free in her action and no abnormalities were detected.

"As a result the mare has been passed fit to start in Saturday’s Longines Queen Elizabeth Stakes."

On a big day for Waller, it was announced his top-class three-year-old colt The Autumn Sun has been retired to Arrowfield Stud.

FIRST PUBLISHED 7:29AM, APR 11 2019
It's good that people can see how much energy she has got. I can't explain how well she is. As Hughie said, she has never been better