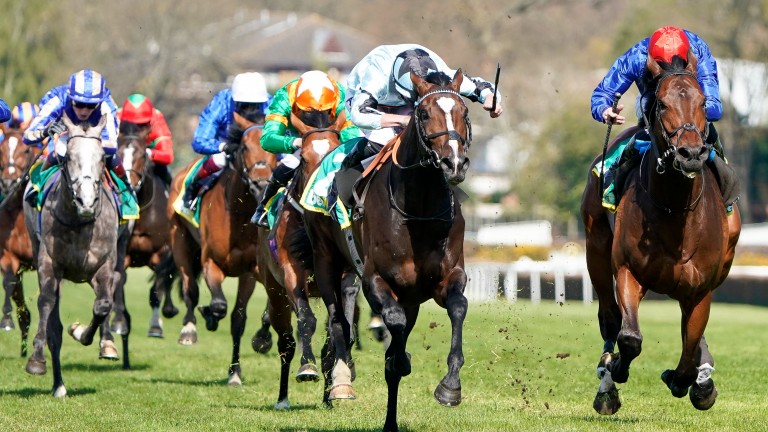 A foot abscess isn't good news at the best of times, let alone a week before a major stepping stone on the way to the top. That was the case for leading middle-distance performer and London Gold Cup winner Bay Bridge, who was as short as 11-4 for the King Edward VII Stakes before being ruled out last Friday.

Not only do connections potentially miss out on winning a valuable Group 2, but the race itself has suffered. Following Bay Bridge's withdrawal and the Aidan O'Brien-trained Sir Lamorak taking up his engagement in Thursday's King George V, this year's running lacks the depth we have seen in recent times.

Nevertheless, Derby form is relevant courtesy of Gear Up, the sole three-year-old to quickly back-up after running at Epsom on June 5. The son of Teofilo took his racing well last year, as most of Mark Johnston-trained horses do, but has yet to prove that he has taken a step forward from two to three.

Gear Up has already earned more than twice as much as he cost as a yearling (£109,000 compared to €52,000), most of it by winning the Group 1 Criterium de Saint-Cloud last October on heavy ground, and is already considered a revelation. Any rain will increase his chance but his Epsom effort when tenth beaten 21 lengths showed little sign of life.

There is also a Derby link through Alenquer, whose German pedigree would leave the best bloodstock judges scratching their heads. The mix of speed and stamina doesn't sell Alenquer as a 1m4f specialist, but there is little arguing how well he fended off subsequent Epsom winner Adayar – and the reopposing Yibir – to land the Classic Trial at Sandown in April.

Although favoured by a clear pace bias on a track that often suits prominent racers, Alenquer gave plenty for pressure and visually found his best stride inside the final 100 yards. Given how well Adayar hit the line in the Derby, Alenquer's game display should be marked up. He can clearly sustain his speed for a fair distance.

That piece of form alone makes him the horse to beat and it's not easy to envisage a form reversal with Yibir. Soft-ground form at two offers further reason to side with him, while a shoulder sit alongside Gear Up looks the likely orders for Tom Marquand's mount.

A high head carriage has been the major takeaway from Title's three career performances, but it clearly doesn't stop him running in the right direction. The son of Camelot is bred to handle this distance and beat Pretty Polly runner-up Sea Karats to break his maiden. His ability isn't in question but confidence may dwindle if he's asked to knuckle down in a close finish.

The team at Ballydoyle don't tend to run their best middle-distance prospects in this race, though Japan and Mogul were considered to be in the higher tier.

The Mediterranean is Aidan O'Brien's entry this year. He was fast-tracked to 1m4f on just his second outing and lost his maiden tag, albeit in a weak field. A Listed defeat last time tempers enthusiasm and he seems a longer-term prospect – maybe one for the St Leger.

Big-price hitters will be attracted to Gloucestershire, who hasn't been seen for 186 days, has yet to run on grass and makes just his second start after a maiden victory on debut. An RPR of 76 requires plenty of improvement to feature, but his participation hints at impressive homework.
Race analysis by Tom Collins

Sir Mark Todd is no stranger to high-pressure situations, but admitted to feeling some nerves before saddling his first Royal Ascot runner.

The trainer twice won Olympic gold as an event rider, but breaks new ground with Tasman Bay, who was second in a Listed race last time. He runs in the colours of Sir Peter Vela, a Melbourne Cup-winning owner who owned Todd's 2011 Badminton winner NZB Land Vision.

"I'm very excited but a bit nervous," said Todd. "I feel lucky to have a horse capable of running at Royal Ascot. He seems fit and well. Unfortunately, we've drawn the outside of the field, but he'll have plenty of time over that trip and hopefully he can find some cover.

"He moves so well, so I don't think the ground should worry him. He handles a bit of cut, but we wouldn't want it to be heavy ground."

Richard Ryan, racing manager for Teme Valley, owners of Gear Up
It's a quick turnaround from the Derby, but Mark [Johnston] has been adept in the past at getting horses to perform well after recent runs. The ground was quite dead at Epsom and a different track on a more consistent surface should suit. A smaller field will be a big help too.

William Haggas, trainer of Alenquer
He'll cope with rain. He's lightly raced and stayed well at Sandown. I think stepping up to a mile and a half will be right up his street.

Martyn Meade, trainer Gloucestershire
He had a bit of a setback earlier in the season, but has come right. We're throwing him in at the deep end, but conditions should suit. The form of his only race at Kempton has worked out well.

Aidan O'Brien, trainer of The Mediterranean
He's progressing away. He was a little bit green last time at Leopardstown, but we think he has come forward from that.

Roger Varian, trainer of Title
He's quite a smart colt who's been a little immature. He lacks a bit of experience, but he's got more professional with each run and I was impressed with him at Yarmouth when he beat a nice filly of William Haggas's [Sea Karats]. A mile and a half at Ascot should suit him and while he has a bit to find on ratings, I think he's very capable.

Charlie Appleby, trainer of Yibir
He's shown a good level of ability but I feel we haven't quite got the key to him yet, which is why he's been gelded since his last start. Conditions at Ascot should suit and we're hoping for an improved performance.
Reporting by Jonathan Harding

FIRST PUBLISHED 6:00PM, JUN 17 2021
Unfortunately, we've drawn the outside of the field but he'll have plenty of time over that trip and hopefully he can find some cover

'He's ready to win if things go right' - trainers on the opening TV handicap Can we trust the Coventry form? Graeme Rodway gives his view on Berkshire Shadow Dual winner Flying Pursuit one of four runners for Easterby in Dash Richard Hannon aiming to continue stellar juvenile form with System Are we looking at a Group 1 horse in a handicap? International Stakes insight Armory tees up Arlington Million tilt by taking on Mohaafeth in Group 2