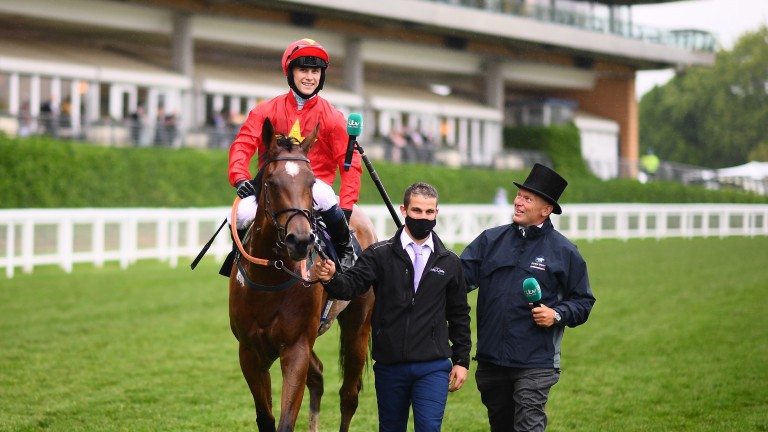 Jason Hart on board Highfield Princess after winning the Buckingham Palace on Thursday
Harry Trump
1 of 1
By David Milnes UPDATED 7:47PM, JUN 18 2021

Less than 24 hours after the pair combined to win the Buckingham Palace Handicap at Ascot with Highfield Princess, they enjoyed a lower-level local win with the three-year-old, who was tackling a new trip.

After Newmarket raider Ilza'Eem took a narrow lead at the furlong pole, Titan Rock finished off best in a field reduced to just seven runners from an original nine on the card.

Absentees were a feature of the afternoon, totalling 16 for a variety of reasons. Some had been declared in the hope of rain that did not materialise.

Paul Mulrennan has struck up a good relationship with Boltaway on his trips north in recent weeks and was seen to good effect again when the pair justified 5-4 favouritism in the 1m2f handicap for three-year-olds.

The Roger Charlton-trained colt is obviously suited by long straights and backed up his recent win at Doncaster when just edging out longtime leader Fairmac.

Boltaway enjoyed the fast ground, just as he had on Town Moor, and held on by a short head.

Mulrennan scored by the same margin at the same price earlier on the card when Southern Voyage sunk market rival Tiger Beetle in the 1m2f novice.

The Archie Watson-trained three-year-old is owned by Clipper Logistics, whose spokesman Joe Foley said: "Southern Voyage is a lovely, developing colt with a nice future."