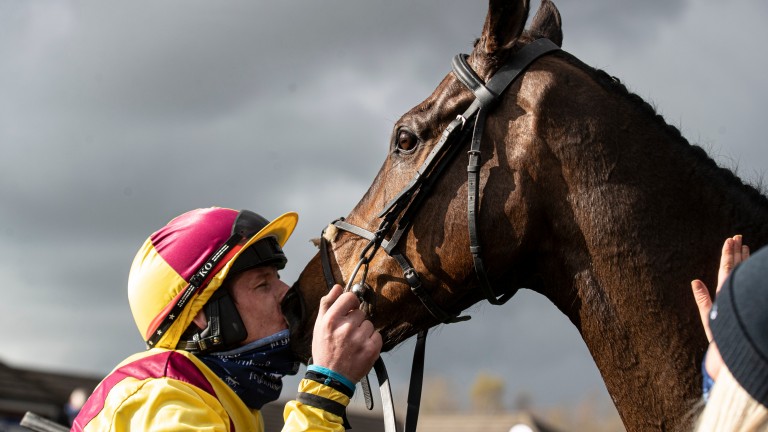 You beauty! Freewheelin Dylan gets a kiss from Ricky Doyle
Patrick McCann / racingpost.com/photos
1 of 1
By Mark Boylan UPDATED 9:29PM, APR 7 2021

The magic of the BoyleSports Irish Grand National waved its wand once again to produce yet another astonishing tale, with the Dermot McLoughlin-trained Freewheelin Dylan becoming the biggest-priced winner in the race's history at 150-1 under an ecstatic Ricky Doyle.

It took the Sheila Mangan-owned winner roughly the same distance to travel to the behind-closed-doors Fairyhouse highlight on Easter Monday as it did for him to gallop into the race's history books, with the local success meaning the fulfilment of a lifetime ambition for the trainer.

McLoughlin was following in the footsteps of his late father Liam, who rode Kerforo to victory in the 1962 edition, and if ever there was a jumping performance to exemplify the spirit of an Irish Grand National winner, this was it.

Doyle is well recognised as one of the hardest-working members of the weighing room, often seen mucking out and driving horseboxes for his boss Conor O'Dwyer. He was fearless here on Kilbeggan's 2020 Midlands National hero as they jumped their rivals into submission from the front, keeping the gallant Run Wild Fred at bay by a length and a quarter.

Latest Exhibition, sent off the 9-2 favourite, showed an excellent attitude off top weight of 11st 10lb to claim fourth but ultimately could never get on terms with the winner, while Enjoy D'Allen did rookie trainer Ciaran Murphy proud in third at 40-1.

"This is the best day of my life by far – I cannot believe it," said Doyle, originally from Sandyford, Dublin but living in Kildare since his youth.

"It's my first ride in the National and I was delighted just to be riding him. Because of the way he jumps, I couldn't wait for the race. I was looking forward to just having a spin in it, and Dermot McLoughlin, what a man."

The 26-year-old, who recorded his best domestic tally over jumps last season with 16 winners, added: "Turning in, I could hear them slapping in behind me and I was thinking to myself, no way am I going this easy in an Irish National on this lad – I couldn't believe it." 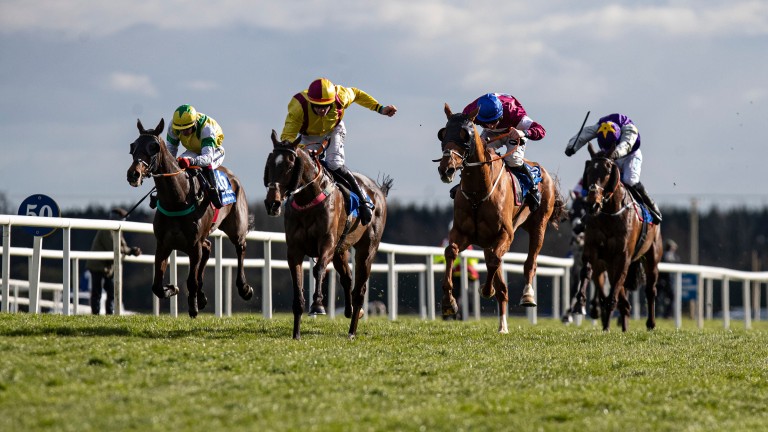 Doyle was keen to acknowledge his boss's part in his most famous triumph. "My career got off well on the Flat and then slowed up a good bit, and since I went to Conor, he has so much trust and faith in me," he said. "He brought me to these days. This is thanks to him and his owners and the staff in the yard for helping me. This means a lot to me for them."

McLoughlin, who recently turned 47, had previously come close to pulling off a similar shock in the 2016 Grand National at Aintree when Vics Canvas finished third at 100-1, and the Bodeen handler didn't appear to be completely surprised by his biggest success yet, considering the huge SP.

"When he gets into a rhythm like that and keeps going, it's hard to get by him," said the married father-of-two, who has never made any secret of the influence a 15-year apprenticeship with the legendary Dreaper family had on his career – a clan synonymous with the Irish Grand National.

"This is a race I always wanted to win. We've been coming here since I was a young boy." 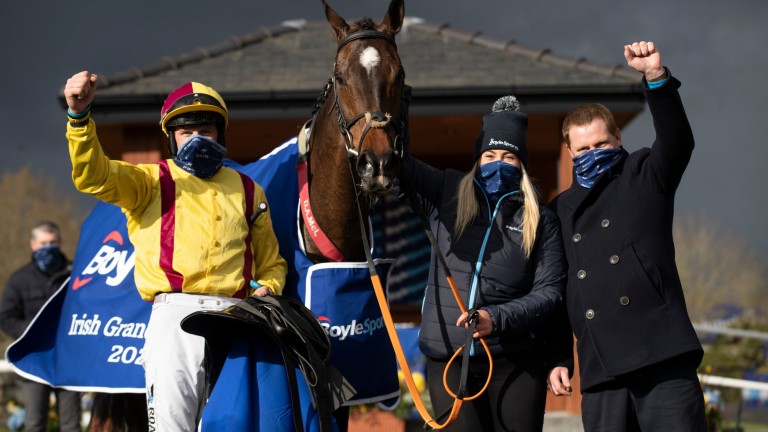 Latest Exhibition's trainer Paul Nolan was among those heartily clapping in the winner and expressed his pride at how his stable's flagbearer performed in defeat.

"I didn't see it all as I was out on the track but he seemed to run a blinder," said the Wexford trainer.

"I believe he couldn't have been in a better place at any stage but the stats don't lie, it's very hard to carry top weight in a race like this. He's only been beaten five lengths and wasn't stopping going through the line. Of course I'm disappointed, but he ran a cracker."

Jack Kennedy, rider of runner-up Run Wild Fred, added: "It was a super run. He missed the last two fences and might have given the winner more of a race if he'd got them right."

There were 12,500 people in attendance the last time the race was held in 2019 – with the 150th anniversary of the race stopped in its tracks due to Covid-19 last Easter – but it's hard to imagine there would have been anything other than a similar stunned silence if the grandstand had been full, aside from McLoughlin's local supporters.

There has never been an Irish National experience like this before, and hopefully we'll all be back to bask in its brilliance by the time next year's race is upon us.

Dermot McLoughlin, Ricky Doyle and Sheila Mangan might just have come down from cloud nine by then.

FIRST PUBLISHED 5:20PM, APR 5 2021
Turning in, I could hear them slapping in behind me and I was thinking to myself, no way am I going this easy in an Irish National on this lad

'I won the Grand National - I definitely love saying that out loud!'