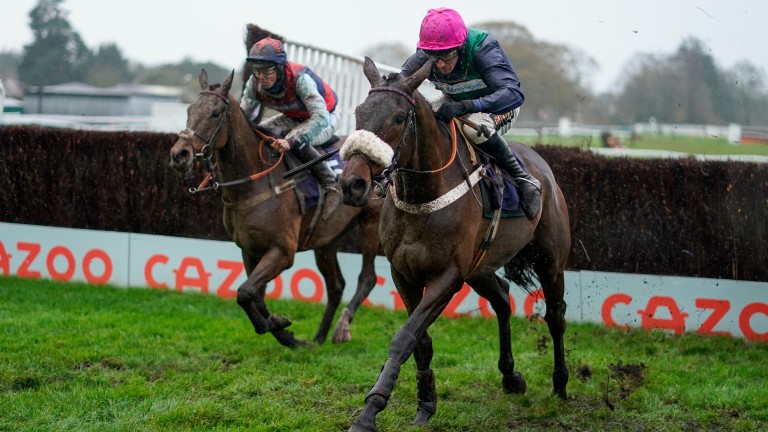 Trainer Toby Lawes was delighted Kap Auteuil's confidence came back at the right time as he defied top weight in the driving rain to land the 2m5½f handicap chase and make it five wins from his last six starts.

The six-year-old notched a four-timer between February and October before his winning run came to an end at Cheltenham's November meeting, but he bounced back to his best when grinding out a length victory under Tom Cannon, who doubled up with Cilaos Glace in the 2m3½f handicap chase.

"We tried experimenting at Cheltenham and we knew it was going to be a big step, but he wasn't quite himself. That was a nice way to build his confidence back up," Lawes said.

"He's a stronger horse who can handle that ground now; he showed a very tenacious attitude."

After failing to win before his four-timer began at Fakenham earlier this year, Kap Auteuil has made up for lost time and Lawes is confident more wins await the Andrew and Sarah Wates-owned gelding.

He added: "He's learned to race a lot better as he was quite keen when he was immature, but he's great fun. He's such a wonderful type and a very special horse.

"He's got loads of quality and I'm sure he'll continue his upward curve. He's a horse who thrives off confidence."

David Bass and Kim Bailey continued their fine run of form after First Flow's win in the Peterborough Chase on Sunday as they teamed up to land the 2m3f mares' novice hurdle with Lady Of The Night, who stormed to an eight and a half-length success.

FIRST PUBLISHED 6:00PM, DEC 7 2021
We tried experimenting at Cheltenham and we knew it was going to be a big step, but he wasn't quite himself

Plans for Netflix racing series progress as filming begins at European stables What does the Shishkin v Energumene thriller mean for their Cheltenham hopes? Capacity crowds set to return for Dublin Racing Festival after measures eased Albert Bartlett ante-post favourite ruled out after minor setback in training Allaho set for Ryanair rematch with Fakir D'Oudairies at Thurles on Sunday Fergal O'Brien has personal-best tally in sight as Karl Philippe triumphs