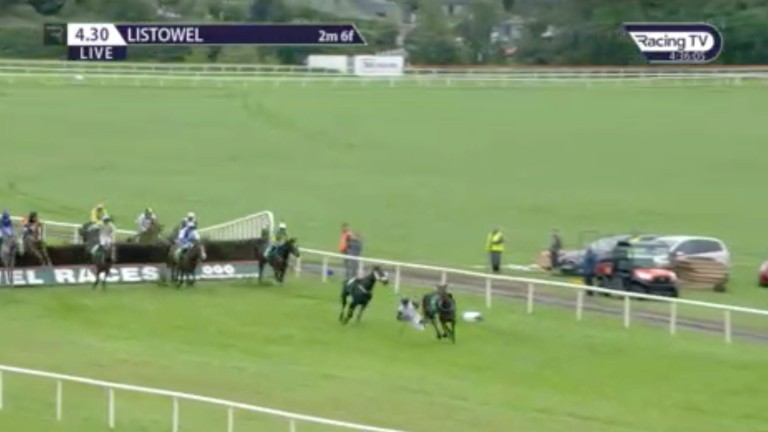 Drama at the last: Theatre World (left) collided with Tune The Chello and Jordan Gainford
RacingTV
1 of 1
By Mark Boylan UPDATED 2:36PM, SEP 25 2021

Late-changing finishes were the order of the day and none was more dramatic than the conclusion of the 2m6f handicap chase as final-fence carnage left Uisce Beatha, who had been a modest third, to claim victory ahead of the staying-on Funky Dady.

Theatre World put in a bold effort from the front under Shane O’Callaghan but crashed out on the landing side of the last fence just as Tune The Chello was throwing down a challenge under Jordan Gainford for Henry de Bromhead.

As Theatre World was rising from the ground he shifted to his right and in the process effectively knocked Gainford out of the saddle.

The oncoming Mister Fogpatches galloped into his path and jumped over the stricken Gainford, with the Cheltenham Festival-winning conditional receiving attention before being transported to hospital. He was passed fit to ride at the track on Saturday.

How the incident unfolded . . . 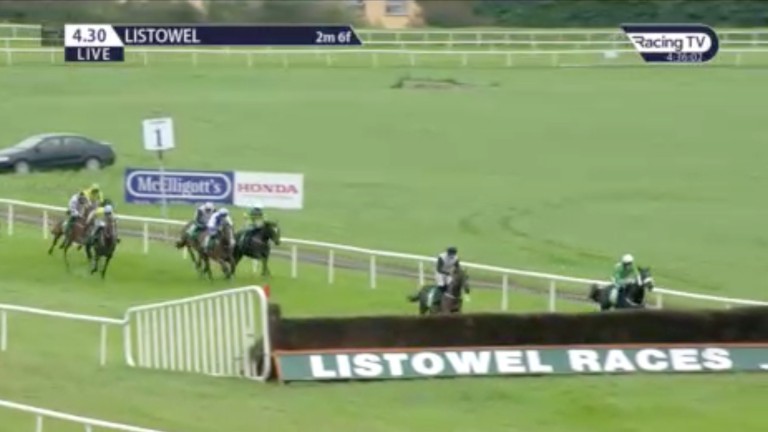 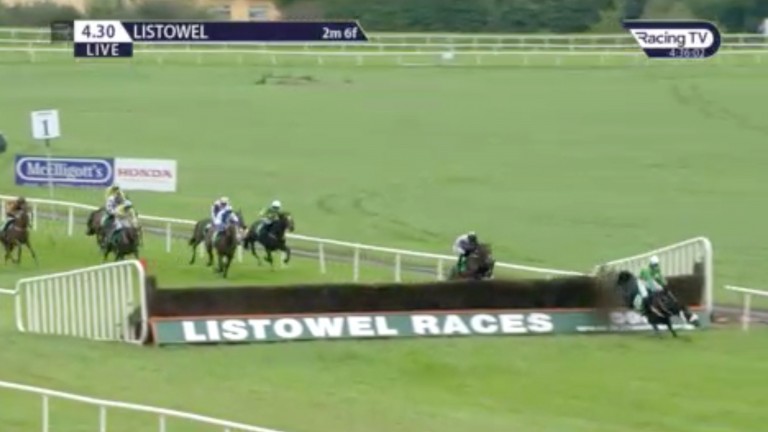 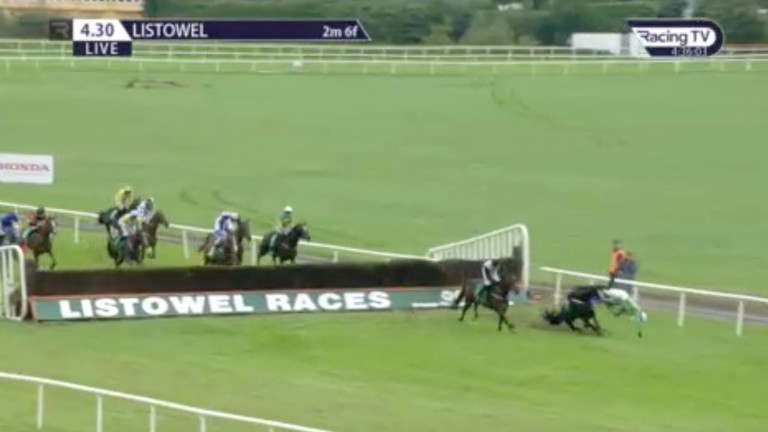 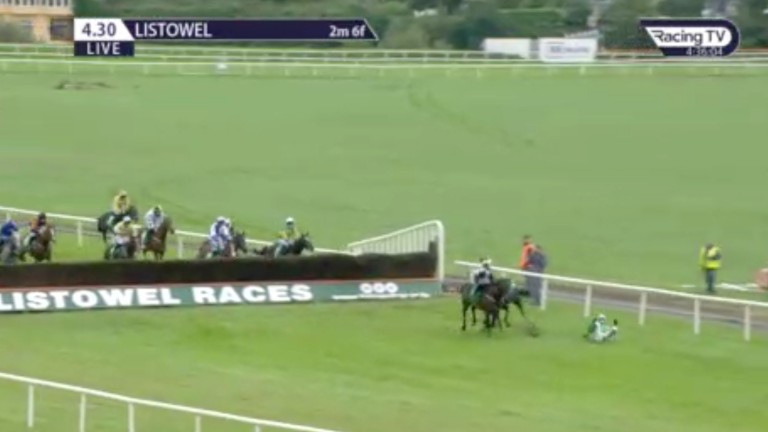 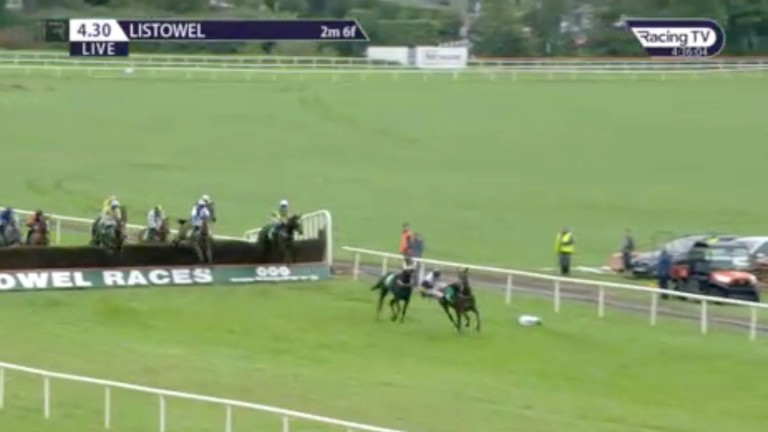 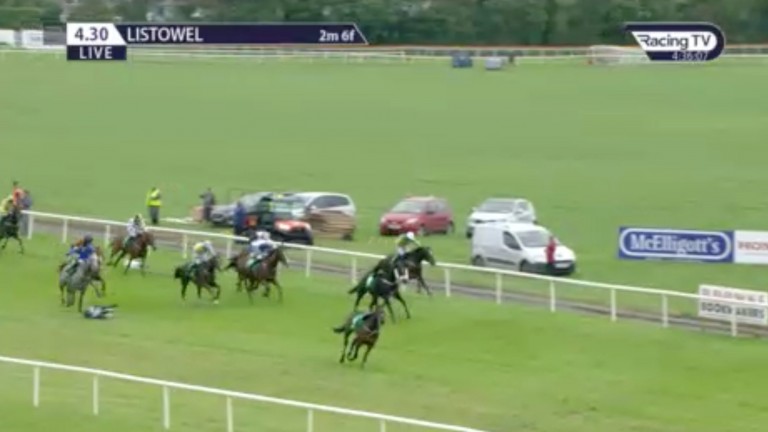 Dr Richard Downey said: "Jordan is sore but was fully conscious leaving the racecourse and has been transferred to Tralee Hospital for precautionary x-rays."

Uisce Beath's victory brought up a double for trainer Padraig Roche after Outside The Door opened his account in the second division of the 3m handicap hurdle.

The first division of the 3m handicap hurdle saw Game Catch, ridden and trained by Paul Power, power home after hitting an in-running high of 500 on the Betfair Exchange.

The five-year-old ran down runner-up Time And Times, who traded at 1.01 in the closing stages.

Buttons And Bows, sent off the 3-1 joint favourite for the 2m4f handicap chase, was another to be involved in late drama as she came down at the final fence when holding every chance, with the race won by Northern Love.

Sean Flanagan made his first ride for Willie Mullins count as plucky mare Dysart Diamond plundered the feature Ladbrokes Handicap Hurdle at 12-1 for the first-time combination.

Deputising for Paul Townend, sidelined with a shoulder injury following a fall at the Kerry venue on Wednesday, the recently-married Flanagan got a fine tune out of Eleanor Manning's six-year-old to land the €80,000 prize.

"I asked [assistant trainer] David Casey who was the best available for the race and he said Sean," Mullins explained of the rider change.

"Sean took the outside route when things didn't go well at the start and it seems to have suited her – she jumped beautifully for him. It's great for Eleanor." 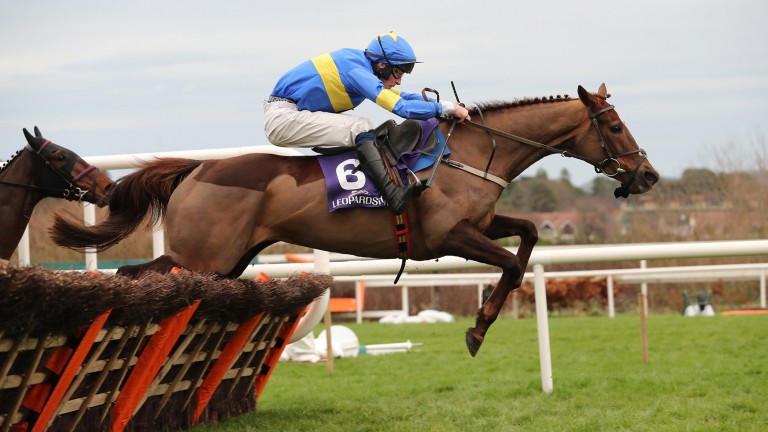 Of the champion jockey's injury, he added: "Paul has a dislocated shoulder. I don't know how long it's going to take, and Paul doesn't know either. He's going to see his specialist in the coming days."

Mullins brought up a double with extremely impressive debutante Pink In The Park, who ran out a 14-length winner of the concluding bumper.

"She could be a bit special that one," he said. "She had been working well at home and brought it to the track. We might put her away until Christmas or the Dublin Racing Festival."

FIRST PUBLISHED 7:00PM, SEP 24 2021
Jordan is sore but was fully conscious leaving the racecourse and has been transferred to Tralee Hospital