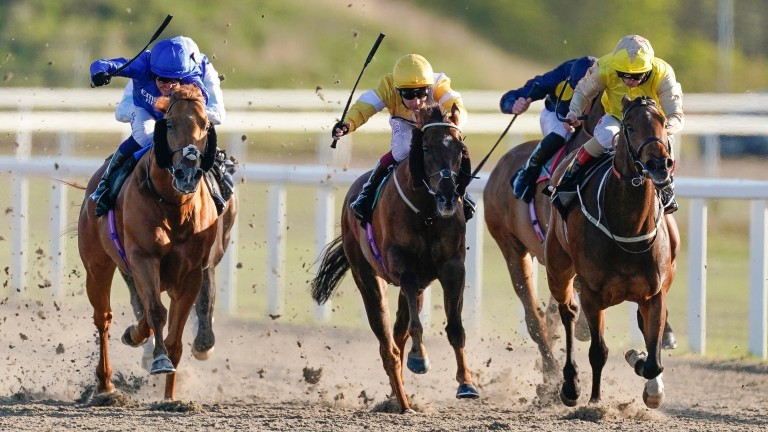 There are two key things to focus on when it comes to five-furlong sprints at Chelmsford. One is early pace and the other is the draw, and if you’ve got both you might be in business.

Stalls one and two enjoy a significant advantage around the tight Essex track over the minimum trip and Raaeb (two) has the right combination of early speed and low draw.

The Saeed bin Suroor-trained four-year-old won over six furlongs at this course in April, when he came from off the pace, but he has been ridden more prominently on recent starts over the longer trip and shapes like he will have the pace to dominate the race on the inside.

Bin Suroor has had great success utilising the claims of promising apprentices down the years and he has booked Stefano Cherchi to ride here. The 3lb claimer has ridden two winners, two seconds, a third and a fourth from just 14 runners for the yard, so it’s a positive combination.

Jack The Truth has the plum draw on Raaeb’s inside in stall one and it will be interesting to see if connections persevere with recent waiting tactics or attempt to be more positive early.

The problem for Jack The Truth is that he is a hard puller who might not settle if allowed his head in the early part of the race. He can also start slowly and maybe he will take a sit in behind. He shouldn’t have any problems finding cover as plenty will want to come across.

Han Solo Berger and Rewaayat are the other two possible pace angles in the race but they have drawn stalls eight and nine respectively, so will have to work hard to get to the front.

Adam West, trainer of Live In The Moment
It's been great to have a proper campaign with him. He's in this race to put him right for the £70,000 handicap at York on August 18. He's undefeated over five furlongs and won at Chelmsford last time.

Dave Loughnane, trainer of Lomu
He's been fairly consistent and has run well here before. He's a little more effective on all-weather than turf so we decided to roll the dice.

Chris Wall, trainer of Han Solo Berger
He found the ground a little firm when second at Newmarket last time but ran respectably. He arguably has a higher level of form on the all-weather than turf and he should go well from a wide draw.

Michael Appleby, trainer of Nigel Nott
He's in good form and was probably a bit rushed off his feet in a better race last time so we've dropped him down in class and he's on a decent mark. It's not an ideal draw but hopefully he can jump well.

George Scott, trainer of Jack The Truth
He's a wonderful old horse who has won nine times and he's come back well after a short break. I'd have preferred to run him in a lower grade but he loves Chelmsford, especially from a low draw.

FIRST PUBLISHED 6:00PM, AUG 2 2021
The 3lb claimer has ridden two winners, two seconds, a third and a fourth from just 14 runners for the yard

Oisin Murphy responds to William Buick's title charge with 70-1 treble Record turnout as visitors flock to Newmarket yards for Henry Cecil Open Weekend Do jockey bookings tell us Murphy may work his magic on Godolphin filly? Show Yourself shows what rising apprentice Stefano Cherchi is all about - again 'The highs and lows of racing' - Jane Chapple-Hyam rues a lost double