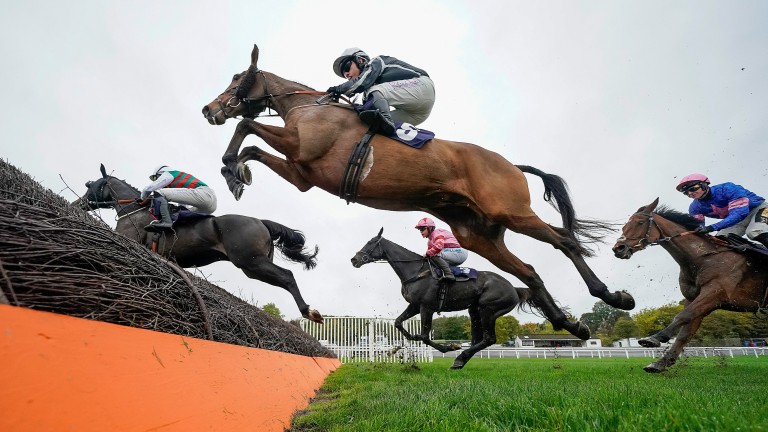 Young Offender: winner on his chasing debut and now steps up in trip for Stuart Edmunds
Alan Crowhurst (Getty Images)
1 of 1
By Keith Melrose and Catherine Macrae UPDATED 6:40PM, DEC 2 2021

Exeter does not pose the stiffest test of jumping at the best of times, and in three of the last four years this marathon has involved the omission of eight of the 21 scheduled fences.

This means that, if the sun should interfere again, on two occasions during this race there would be a run of ten and a half furlongs between one fence (ditch down the side of the course) and the next (first in the straight).

A fence is not just an obstacle, it is a soft reset of the gallop, so in theory missed fences make it harder for the really dour plodders to keep up.

You're thinking of Dawson City, aren't you? He is the archetype for this race but is rated 1lb too high to be eligible this year. In his absence the field is made up of a surprisingly fresh-faced group of chasers, although admittedly it is the best part of a decade since a horse older than eight was successful.

Young Offender is having just his second run over fences. If you wanted a trial for this contest, you would struggle to beat his successful chasing debut at Chepstow. In a race with a minor reputation for producing handy stayers, he found loads for pressure to repel a horse who has since run well again. A step-up in trip looks sensible, although so does a five-week break as that was a hard race.

The other form line to note is the 3m handicap chase here on Haldon Gold Cup day. Five-year-old Poppa Poutine fared best of those running in this race with a late-weakening fourth, but Django Django and Snuff Box both showed signs of life and connections might have had this race in mind.
Keith Melrose, betting editor

Richard Newland, trainer of Aaron Lad
He's in super form and I'm looking forward to running him. It's a tough ask to send him out for the first time this season over that kind of distance but it's a good starting point. He's won at the track which will serve him well.

Victor Dartnall, trainer of Dancing Shadow
He's in great heart this season as he was last year. It's amazing how well he seems to hold his form and it should all suit him here. The ground is ideal, he doesn't want it too heavy and he's won over four miles, so the distance isn't a concern.

Stuart Edmunds, trainer of Young Offender
He seems good and I think the trip will suit him. The track plays into his rhythm and over that distance I expect a good run. He won over 3m2f last time but isn't very fast, so I think he'll love this longer trip and he's come on well from his last race.

Grace Harris, trainer of On Call
He's won his last two starts this season but he's got to improve again for this. We think he'll go well and it'll be interesting to see if he stays the trip. He's been finishing his previous races well and with the nice prize-money it looked a good opportunity to see whether he can go the longer trip. He was progressing all of last season and although aged nine he's just come into himself now.

Philip Hobbs, trainer of Storm Force Ben
He certainly seemed to stay on well last time, which was his first chase and his best effort. He's always been more of a stayer and we think this will suit him.
Reporting by Catherine Macrae

FIRST PUBLISHED 6:00PM, DEC 2 2021
He doesn't want it too heavy and he's won over four miles, so the distance isn't a concern

'Special achievement' - first winner for Harriet Brown as 40-1 Trump shocks 'A 4lb rise is lenient' - find out which horse has caught our top tipster's eye Exeter Placepot picks: Richard Birch has two bankers to round off his perm