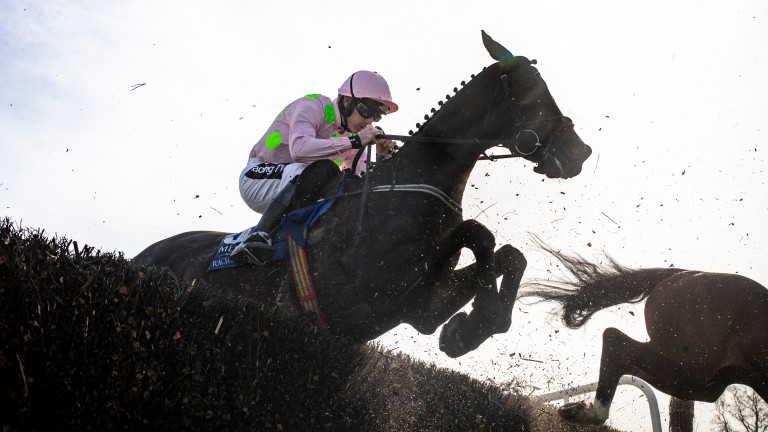 Burrows Saint: one of seven runners for the champion trainer and the choice of Ruby Walsh
Patrick McCann
1 of 1
By Tony O'Hehir UPDATED 12:17PM, APR 22 2019

The BoyleSports Irish Grand National is one of the very few big prizes to have eluded Willie Mullins.

Ireland's champion trainer is hoping to fill thatvoid on his glittering CV on Mondaywhen he launches a seven-strong challenge on the €500,000 Fairyhouse spectacular, which includes Isleofhopendreams, who agonisingly lost out by a head a year ago.

How to bet on racingpost.com

Mullins has saddled 34 horses in the Irish Grand National, with his first runner Padashpan being pulled up in 1998.

He said:"The Irish National was very lucky for my father [Paddy], who trained four winners of the race– Vulpine, Herring Gull, Dim Wit and Luska– but it certainly hasn't been a lucky race for me.

"It would mean a lot if we were to win it after many years of trying."

Ruby Walsh, successful in the race on Commanche Court in 2000 and Numbersixvalverde in 2005, partners Burrows Saint, the shortest-priced of Mullins' septetwho has been backed down to as low as 7-1 (from 10). He will be making his handicap debut following two wins in novice events at Gowran Park and Limerick.

Mullins said: "Ruby was keen to ride Burrows Saint. Novices have quite a good record in the race and he's a good jumper and in good form."

The Punt: Maddy Playle with her selection for the Irish Grand National

Pairofbrowneyes, who won the Leinster National last month for the second consecutive year, is another Mullins runner prominent in the market at 12-1, and is themount of Paul Townend.

"We decided to skip the Aintree National and to go for this race instead," said the trainer. "Paul likes him and the horse is in good form, although the ground won't be ideal."

"He's had a light season and will like the ground and the trip," said Mullins.

IsleofhopendreamsandBellow Mome finished second and third in the Leinster National last time behind Pairofbrowneyes, andMullins said of their chances: "It was encouraging to see Isleofhopendreams come back to form at Naas and we know he likes Fairyhouse and is an out-and-out stayer.

"Bellow Mome has a nice low weight and David [Mullins] was happy he would improve a good bit from the run at Naas last time."

An unexposed, prominent-racing horse with the promise for marathon trips leads to a few paths, perhaps the most appealing of which isShady Operatorat the foot of the weights. If he can keep the mistakes down, he should go well.

Completing the Mullins team are Acapella Bourgeois, who returned to winning ways at Clonmel last month, and C'est Jersey, who will be running in his first handicap over fences.

"The drying ground will suit Acapella Bougeois and we'll have to see how he fares over the trip, while Katie O'Farrell's 5lb claim means C’est Jersey will have only 9st 13lb on his back,"Mullins added.

Elliott hoping to be struck by London bus syndrome

Gordon Elliott landed his first Irish Grand National a year ago when General Principle shaded the verdict from Isleofhopendreams in a photo-finish, andthe trainerruns a huge team of 12 in his bid to strike again. 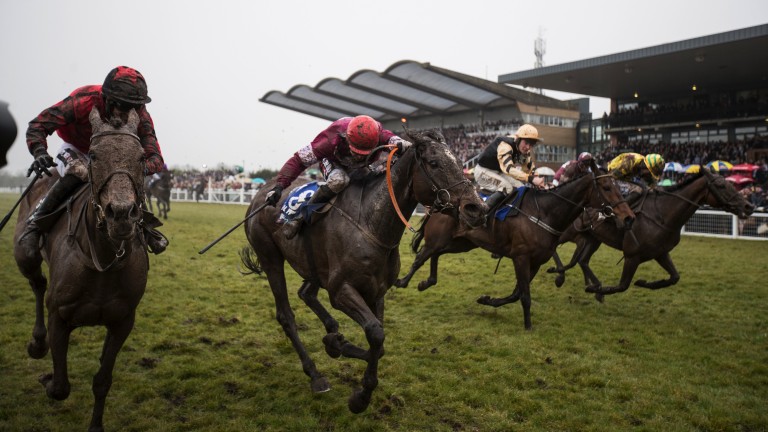 His dozen-strong challenge is one more than he fielded in the Grand National won by Tiger Roll at Aintree this month but one less than in last year's Irish Grand National.

Davy Russell will be bidding for a first win in the race aboard Shattered Love, who finished ninth in the Cheltenham Gold Cup last month.

Elliott said: "She's a class mare and was bang there turning for home in the Gold Cup. The trip will be unknown territory for her, but she's in super form."

Not only is she in super form but Shattered Love's rider will sport the blue cap for Giggnstown House Stud, acapreckonedby the owners to be 'lucky'in big races. 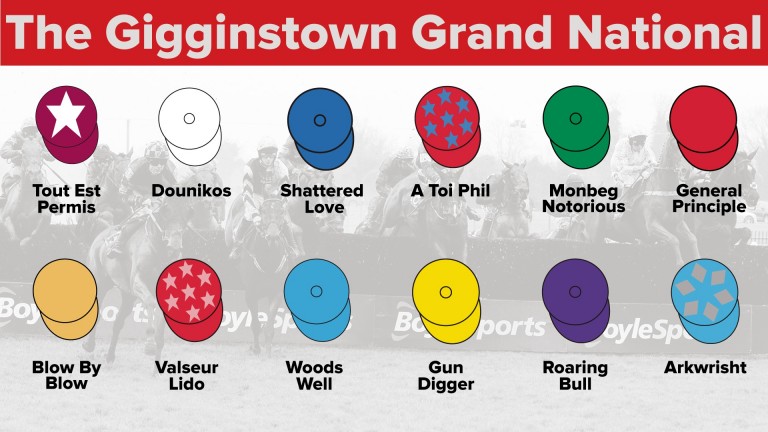 Like Elliott, Gigginstown have no fewer than 12 runners in the race, spread across four trainers, with Elliott responsible for nine of their representation.

Last year's winner for Elliott and Gigginstown, General Principle, is again in the line-up and is one of six Elliott-trained runners who competed in the Grand National at Aintree. A Toi Phil, who finished 12th, is the only one of thoselining uphere to have completed the course at Aintree, and speaking on Sunday, Elliott said: "You never know what effect Aintree might have had, but all six seem in good form.

"Jury Duty, who unseated at the 18th, will love the good ground. So will Dounikos, who was pulled up at Aintree after winning the National Trial at Punchestown.

"General Principle fell at the 18th and it was testing when he won this last year, so the ground won't be ideal for him.

"A Toi Phil failed to stay at Aintree, Monbeg Notorious never had a cut at the fences and is very inconsistent, while Blow By Blow blows very hot and cold."

Elliott added:"Woods Well also ran at Aintree and was staying on well in the closing stages of the Topham Chase, and the longer trip should be fine for him."

Commenting on hisremaining contenders Elliott said: "Roaring Bull stayed on well over three miles at Limerick last time and if he improves a bit he'll have an each-way shout, while Gun Digger was going well when he fell at Cheltenham and will be fresher than most.

"Out Sam is well but would prefer slow ground, while Measureofmydreams was let down by his jumping at Cheltenham, but he could go well if he getshis act together."

If you are interested in this you should read:

4.20 Fairyhouse: The Storyteller has good chance to get off mark fot the season

FIRST PUBLISHED 6:00PM, APR 21 2019
Ruby was keen to ride Burrows Saint. Novices have quite a good record in the race and he?s a good jumper and in good form

Take a sip of Ballybrit Lite, it won't taste the same but you might like it Top owners Simon Munir and Isaac Souede remove horses from Gordon Elliott's yard Owner horrified to learn Kiss Me Kayf was sent to English abattoir Henderson: racing must heed Panorama warning over traceability of retired horses Panorama to allege ex-Elliott horses were sent to UK abattoir Finally! Excelcius produces excellent display to record only his second victory