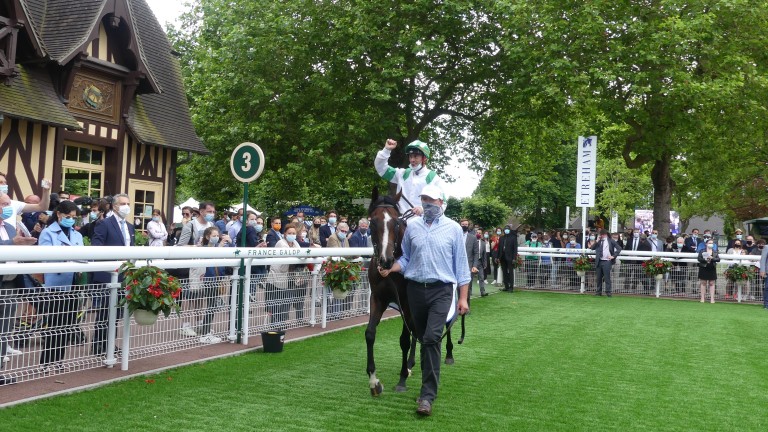 A delighted Olivier Peslier after his win on Laws Of Indices
Racing Post
1 of 1
By Scott Burton UPDATED 7:15PM, JUL 11 2021

Laws Of Indices gave Ken Condon a second Group 1 success on the Deauville dragstrip when springing a 28-1 surprise in the Haras d'Etreham Prix Jean Prat under a cool ride from Olivier Peslier.

Condon has fond memories of the Normandy coast from the success of Romanised in the 2019 Prix Jacques le Marois and although he had to watch on from Fairyhouse this time, it became obvious early in the race that the son of Power was travelling ominously well at the head of the larger group which elected to race down the centre of the track.

Thunder Moon came out of the pack to throw down a determined challenge under Maxime Guyon but Laws Of Indices was able to conjure one final effort to prevail by a head, with Midtown the best of the home defence in third.

Condon said: "One of the owners asked what I told Olivier to do and I just said, 'you don’t tell Olivier Peslier what to do.' He'd done his homework, he'd watched all his races and he just said, 'I'll see how I jump and I'll take it from there'.

"It worked out beautifully and when he got to the two [furlong pole] I thought we had a chance. He was headed it looked like and then battled back."

Like plenty of top-class horses who are ideally suited by seven furlongs, Laws Of Indices has been caught somewhat in no-man's land in the early part of the season waiting for this race, although an end-of-season campaign that could take in the Prix de la Foret on Arc day, then the Breeders' Cup Mile at Del Mar, means the wait will have been worth it.

"It’s tremendous," said Condon. "He was an eight grand yearling, a son of Power. He got a little bit bogged down in Ascot on very soft ground the other day, but he'd run very well in the Guineas Trial first run back and I knew then he had trained on because he was trying to give Poetic Flare 3lb with a Group 2 penalty.

"It's a race that’s worked out very well with plenty of winners coming out of it."

Condon added: "He was sneaking in a little bit under the radar but the owners are five friends and they've never been afraid to take a chance. Even though he was a big price we were hopeful he could run in the top four, so to win is amazing; we’re thrilled.

"I think seven is his trip and the Prix de la Foret at the end of the year would be a nice target for him, while a horse with his kind of profile and his blend of pace often runs well in a Breeders’ Cup Mile. But I think in Europe seven is perfect for him." 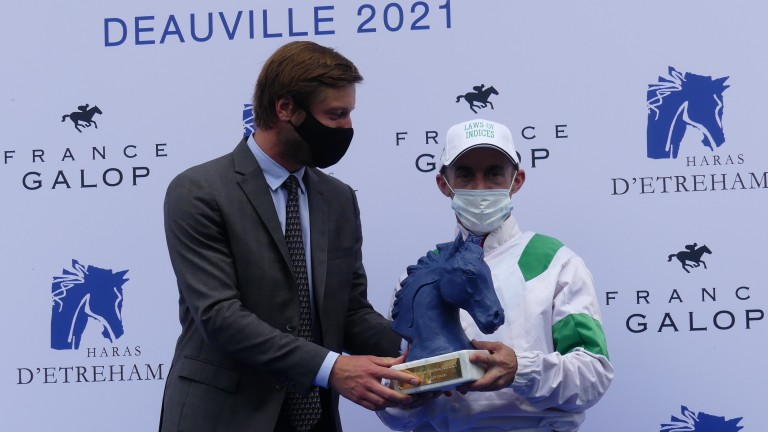 Peslier won his first Group 1 in the Jean Prat on the Nicolas Clement-trained Le Balafre in 1993 and was pocketing the prize for a fifth time.

Peslier said: "I wanted to stay in the middle. We were drawn seven and I wanted to stay there, not go near the stands because when I walked the track I saw the ground was better where I was.

"He can be lazy when he starts, but he started well today because the trip was longer. He travelled well and we accelerated, and then he fought well."

After struggling in both the 2,000 Guineas and the St James's Palace Stakes, Thunder Moon returned to somewhere near his excellent two-year-old form and Joseph O'Brien will be able to plan the second half of the season with confidence.

Andre Fabre considered Midtown the best of his three-year-olds in the spring before a setback ruled him out of the Classics.

He travelled well at the back of the main pack and showed a fine turn of foot to get to the leader, before just being run out of it in the final 100 yards.

Godolphin's Lisa-Jane Graffard said: "We're thrilled with third place after Midtown had missed eight months. We think he's a very good horse and Monsieur Fabre has done an outstanding job to get him here in such good shape. He is sure to progress from here."

FIRST PUBLISHED 2:59PM, JUL 11 2021
He travelled well and we accelerated, and then he fought well