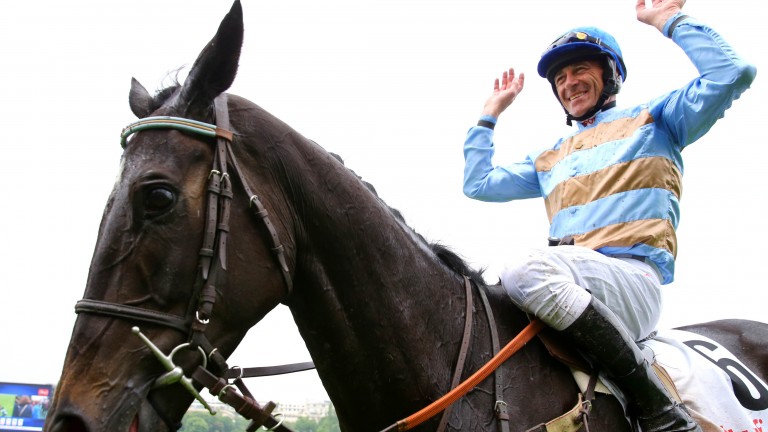 Davy Russell celebrates after steering Carriacou to victory on his very first attempt at Auteuil
© APRH / QUENTIN BERTRAND
1 of 1
By Scott Burton UPDATED 4:39PM, MAY 20 2019

He can now been spoken of in the same hushed tones as Fred Winter, who steered Kilmore to Aintree success in 1962 before the bitless glory of Mandarin at Auteuil.

There were no such dramas for Russell, who only got the call to partner Carriacou on Friday morning and who was able to take a pull in between the final two fences before surging past Bipolaire.

All the talk beforehand was about how the five Willie Mullins-trained runners would cope with virtually no experience of Auteuil's unique track but in the end, the victory went to a rider that was having his first competitive tilt at the fearsome obstacles.

But winning trainer Isabelle Pacault and the wider French public were only learning what those in Ireland and Britain have known for a long time – very few horsemen can handle the demands of the biggest days as well as Russell.

Russell said: "Seamus Murphy, an Irish agent, called me up on Friday to see if I could do the weight and then I went and rode him early on Saturday morning and Isabelle just left it to me.

"She was very happy for me to do whatever I felt was right. She told me to ride him with feel and when you get instructions like that, it's very good."

Russell has never been anything other than his own man and that extended to figuring out the track, as he decided against speaking to any of the Irish or French-based jockeys with Grand Steeple-Chase experience.

"I took my own view on it if I'm being brutally honest," Russell added. "I had a good look around and I thought the key was to settle him and get into a nice rhythm and just try and get free of trouble. The favourite [Bipolaire] was in front of me and I saw Paul Townend [on Burrows Saint] was there so I was keeping good company."

Carriacou has been kept away from the traditional Grand Steep preps this spring by Pacault, who becomes the first woman to train the winner and who was left looking for a fourth choice jockey after through a combination of injury and prior commitments.

"I had loads of horse, I was very happy and I just didn't want to get to the front too soon," said Russell. "Then I had the choice because I didn't want him to get disappointed and I had to make the call when to go. Thankfully it was the right call."

Those who have witnessed Pacault up close during a race know that screaming is closely attended by tears but the cries of victory were assured as soon as the seven-year-old cleared away from the last.

"Davy had no prior ideas but he's ridden in big races with 40 horses and he has ice blood in his veins," said Pacault. 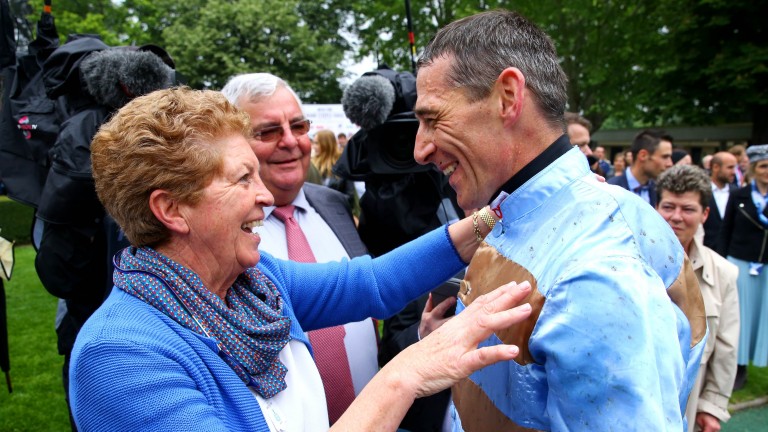 Asked about her achievement, she said: "I don't like all that – a man, a woman – it’s all about the horse, the team and, above all, this is a family success."

Burrows Saint kept Mullins' hopes alive for a long way before tiring between the final two under Townend, with all the Closutton team finishing the race.

Mullins said: "Burrows Saint travelled too well. He landed in front at the second water jump and he was just doing too much too soon in the race.

"I looked for Davy Russell when I was after a jockey [for Rathvinden] and I said to myself: 'Who is the clever guy who has got him already?' And it was Isabelle. It's a fantastic victory and fantastic year for him."

Russell's progress from the presentation back to the weighing room became a joyful trial by selfie and autograph, as he showed the same sure touch as during the race.

Asked to compare victory in the Grand Steep with his Gold Cup and Grand Nationals, he said simply: "Oh, right up there. This is a spectacular race."

A spectacular race won with a ride to match.

FIRST PUBLISHED 3:58PM, MAY 19 2019
Isabelle told me to ride him with feel and when you get instructions like that, it's very good