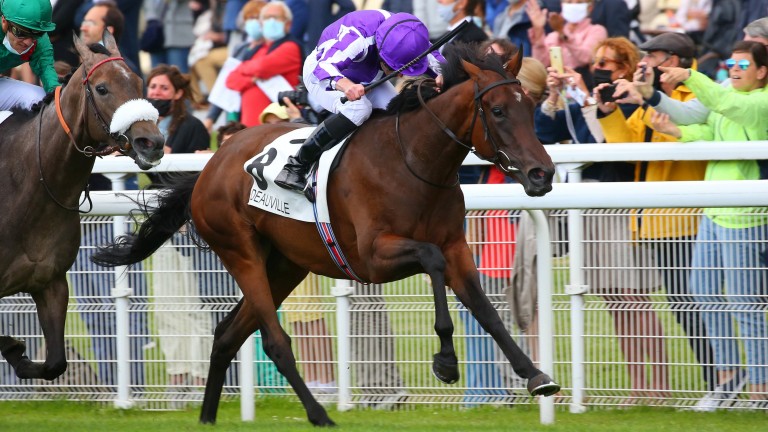 It was desperately close at the line but 1,000 Guineas winner Mother Earth did just enough to hold a trio of French challengers at bay under a determined Ryan Moore in a pulsating Prix Rothschild.

It marked a fifth Group 1 success in France this year for Aidan O'Brien, although this was the first time the trainer had been there to witness the triumph.

And although the daughter of Zoffany only had a head and two short heads in hand of the four-year-olds Sagamiyra and Speak Of The Devil and fellow three-year-old Rougir, O'Brien felt Mother Earth had done only what was required.

"She has a great mind, settles well, travels well and quickens well. She’s a very, very good filly," said O'Brien. "We think a mile is her trip. Sometimes when she goes to the front she waits a little bit and doesn't want to be in front for too long, but we think at the moment a mile is perfect."

Moore made a decisive choice to get out from behind Padovana and into clear sailing just inside the three-furlong marker and was in front a furlong out.

Moore and O'Brien were combining for a second success in the Rothschild and, although Mother Earth is bigger than their 2017 winner Roly Poly, there is a lot about her that is reminiscent of that tough filly.

Mother Earth's previous visit to France ended with her being caught close home by Coeursamba in the Poule d'Essai des Pouliches – the only one of the four French Classics to elude O'Brien this season – but the rematch did not materialise as Cristian Demuro found himself on the wing and the pair were never nearer than the sixth place posted at the line.

O'Brien did not rule out a quick return to Normandy for the Prix Jacques le Marois in 12 days' time.

And while confirmation came on Tuesday that the stable would have no runners in the Melbourne Cup this year, Mother Earth looks likely to be on the team sheet for the Breeders' Cup at Del Mar if she can keep her form. 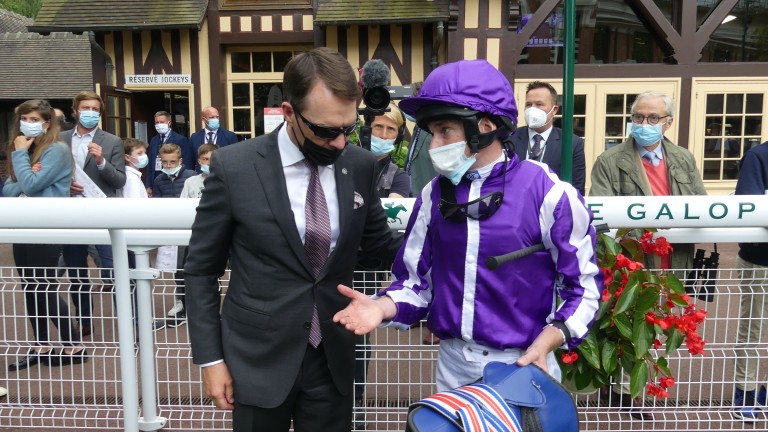 "I don’t think she'll need a break – she's very professional and she takes her racing well," said O'Brien. "The races are spaced out nicely and she’s coming out of her races very well."

In respect of the Breeders' Cup being a target, he added: "I think so. She's very versatile [in terms of ground] and she was second in America last year."

The result was another boost for the Falmouth form, with Mother Earth becoming the third top-level winner to come out of the race following big-race triumphs for Lady Bowthorpe and Alcohol Free at Glorious Goodwood last week.

Mikel Delzangles produced Sagamiyra for a clear career-best in second, with Christophe Soumillon choosing to track the pace down the middle of the track.

"She ran a very good race and she's been beaten by a champion," said Delzangles. "She has lots of options over 1,600 metres [a mile] and 1,400 metres [seven furlongs] and so we'll see how she comes out of this. This morning we put her in the Sun Chariot and it's not impossible we could go there."

FIRST PUBLISHED 2:13PM, AUG 3 2021
Sometimes when she goes to the front she waits a little bit and doesn't want to be in front for too long, but we think at the moment a mile is perfect

'Possibly the best we have ever had in Ballydoyle' - St Mark's Basilica retired 'The ability to settle and then sprint made St Mark's Basilica a rare commodity' Dual Leger winner Search For A Song returns to her brilliant best No home Arc challenge? Bubble Gift could be the one to burst that illusion Saturday reaction: 'His impressive physique gives hope for next year' 'He's a very impressive individual' - Luxembourg powers into 2022 Derby picture