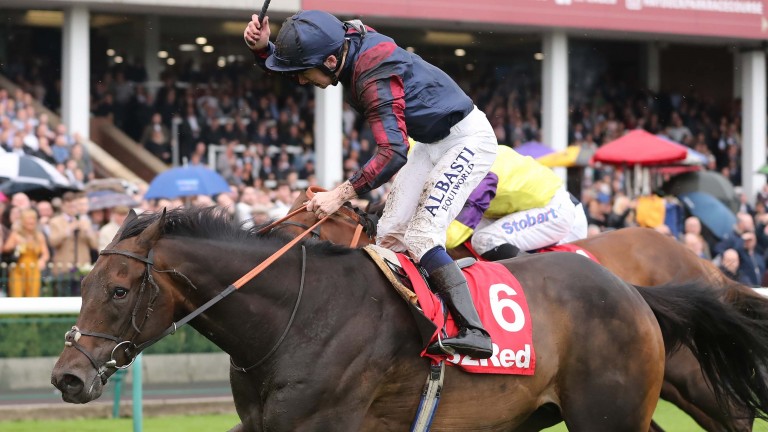 More has made it all the merrier for the multiple members of the Fred Archer Racing syndicate, who have shared the sort of ride an owner could spend millions on without coming close to thanks to their redoubtable old-stager The Tin Man.

Saturday's run in the Diamond Jubilee Stakes marked the sixth year in succession he has competed for Group 1 honours and judged on the way he stuck-on for seventh, you would not put it past the eight-year-old visiting the winner's enclosure again this season.

His record reads like a comprehensive guide to the best 6f races in Europe. From Ascot for the British Champions Sprint and Diamond Jubilee Stakes, to the Sprint Cup at Haydock. Name the dash and more than likely The Tin Man has the saddle cloth.

Boasting three wins at the highest level among his nine career successes, he more often than not plays far more than a supporting role, accumulating more than £1.2 million in prize-money for the group of owners who call him their own.

"He's the most magical horse to own," says Jan Hopper, who along with husband Peter signed up when Jacko Fanshawe, the effervescent wife of Newmarket trainer James Fanshawe, offered ten shares in the horse at the end of 2013. 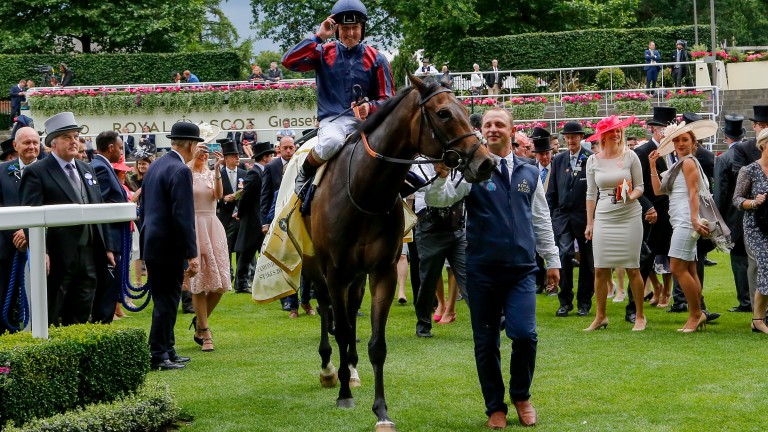 The journey has been meteoric and, thanks to The Tin Man's sturdiness, has given members of the Fred Archer Racing – Ormonde syndicate the sort of longevity you rarely see over jumps, never mind on the Flat.

"For a syndicate horse he's been perfect and given us the most wonderful ride," continues Hopper. "Hardly anyone in the syndicate knew anyone else before, so we've all got to know each other. We're all from different backgrounds and different parts of the country, with different experiences in ownership. Doing it together is what has made it so special."

As is so often the case with the stories you cannot put down, the tale of The Tin Man could have been so different. For that, syndicate manager Jacko is to thank, for had she not told a small white lie as the son of Equiano circled the sales ring, he would never have joined the team at Pegasus Stables.

“He wasn’t on any of the agents’ books at all,” she recalls. “The bidding for him at Tattersalls Book 1 got to 60,000gns and James asked what I thought. I said to go one more. So he went one more and someone then went to 75,000gns. 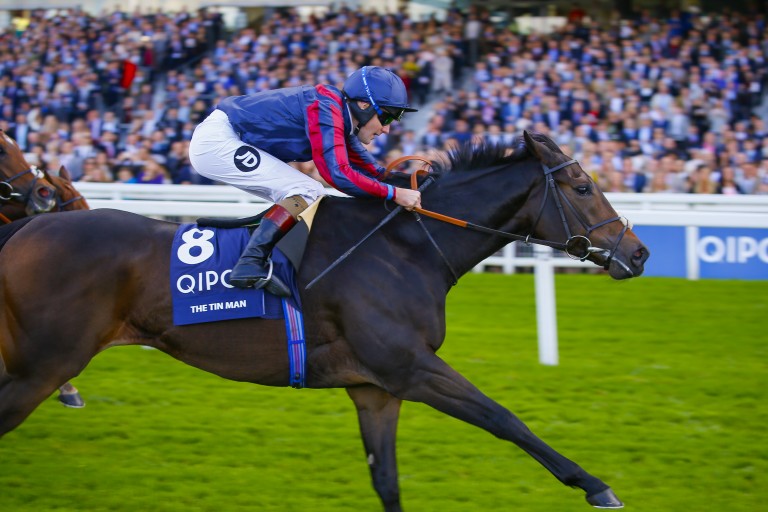 It mattered not, a half-brother to Fanshawe favourite Deacon Blues, the new recruit proved popular with many of the trainer's existing owners, who embraced the shared-ownership option and snapped-up the shares.

Unraced at two due to a growth on the bone of his forearm which had to be removed, The Tin Man's debut at three was most memorable for the show he put on trying to impress the fillies he was lining up against before managing to beat just one rival home.

"He was so vociferous on his first start at Doncaster he was not concentrating on the job at all," says his trainer. "By this stage the gloss had come off his original yearling purchase and we needed to get going, do what's best for the horse and get him running.

"We had a syndicate of ten people, who wanted to see him running, and I was making lots of excuses so we got him gelded."

A little lighter for his next start, he scored the first of three wins in a first season on the track that concluded with a blinding fourth to champion sprinter Muhaarar in the British Champions Sprint at Ascot, although only after a round of Hokey Cokey. 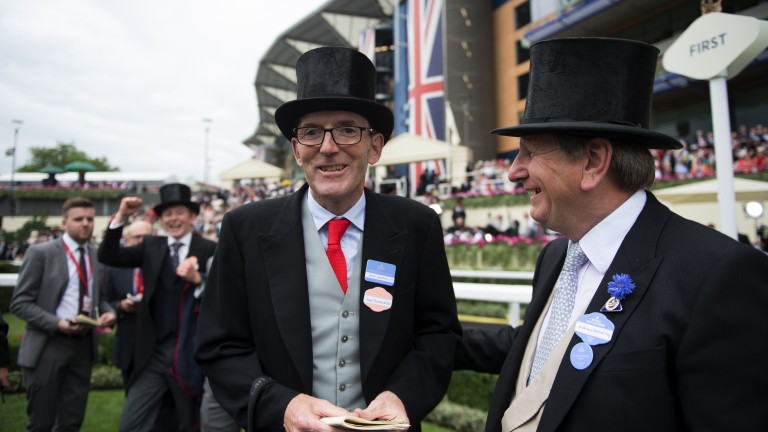 "It was after his second win that we entered him for the Champions Sprint but then he disappointed at York so I took him out of the race. Then he hacked up in a handicap at Ascot at the start of October and we had to supplement him back into the Champions Sprint," relives his trainer, able to see a funny side that was nowhere to be seen at the time.

The Tin Man broke his Group 1 duck in the same race the following season, added the Diamond Jubilee Stakes at Royal Ascot to his big-race haul in 2017 and scooped Haydock's Sprint Cup in 2018, much to the delight of his enthusiastic owners.

"The highlight would have to be going to Ascot and winning the Diamond Jubilee," says Hopper. "Nobody imagined it would come to that. All of us in the winner's enclosure being presented the prize by Her Majesty was fantastic.

"Anytime anyone puts a picture of him on Twitter now, he gets so many likes because everyone loves him and he's become a people's horse."

For Fanshawe, The Tin Man sits right up there with the star females, Soviet Song, Speedy Board, Ribbons and Frizzante, he has trained as well as sharing the top billing with sprinters Deacon Blues and Society Rock. Not the highest rated he has handled, but what sets his current stable star apart is his wonderful longevity.

"He's eight now and has been in training for six and a half years, so probably considers it more his yard than mine now," says Fanshawe. "I've had the family for 25 years and the most common thing about the colts and geldings in the family is they don't show you much at home.

"They just get on with their work and keep you guessing and he's the same. He has his own playpen that no one else is allowed in – that's his own territory and he gets turned out everyday.

"That's one of his luxuries but when they're that good, you're always looking to steal an edge so you've got a chance of winning a Group 1."

Especially enjoyable for the trainer has been the role his whole family has played in helping the veteran sprinter earn his spot among the favourites on the Flat.

From Jacko's vision to start an in-house syndicate, to son Tom's careful handling of The Tin Man during his formative years on the gallops, everyone in the Fanshawe household has played their part in an absorbing story that has yet to reach its conclusion. 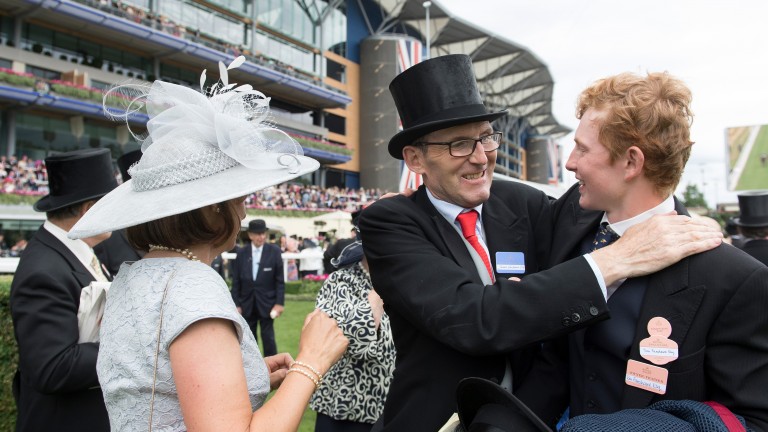 Tom Fanshawe has recently returned from a two-year trip of a lifetime to Australia but the role he played in nurturing The Tin Man during his youth is as significant as any.

Entrusted with bringing the horse along in the mornings, so strong was their partnership, Fanshawe snr insisted his son put his trip to Australia on hold for a year in 2017, not wanting to disturb the equilibrium during a season that revolved around Royal Ascot.

Tom stayed put, The Tin Man continued to sparkle and connections enjoyed the greatest thrill of all with success in the Diamond Jubilee Stakes.

"I first sat on him after his debut and rode him for three years before I went to Australia," says Fanshawe jnr, who handed over responsibility to Claire Mackay when he departed for the other side of the world and heaps praise on the way she handled the eight-year-old since.

"I was incredibly lucky to ride a horse like that and you won't find another like him. He's such a character and gives you signs with a buck or a kick that he's fresh, well and happy within himself.

"There's never any nastiness – he's a gentleman and always safe when he does give a buck."

His is one of the first faces Tom sees every morning and he hopes Pegasus Stables will be the horse's home for life, although retirement appears to be far from imminent based on his homework.

"Claire keeps him very sweet and that's the key," he says. "He's up against a new wave of horses every year but I can still see him competing at the same level and he shows no signs of deteriorating."

Named after Fred Archer, the former champion jockey who built Pegasus Stables in the 19th century, The Tin Man is the biggest attraction bar none at the yard and much loved by all.

Tom concludes: "It will be strange the year he does retire because he's had box 19 here for the last six years. He's a happy horse, who always has his head out of the stable. He's one of the first you see and I hope he stays here even when his racing days are over."

Considering all he has done for the yard, it seems a safe bet that box 19 will be his for good.

FIRST PUBLISHED 10:00AM, JUN 24 2020
He's such a character and gives you signs with a buck or a kick that he's fresh, well and happy within himself

Call to arms for British racing to reimagine ownership in wake of Covid-19 Needing the 5,000: Goodwood hopes to have members at one day of Glorious meeting Former Sky Bet head of IT jailed for selling £220,000 worth of company laptops 'He shows class' - Galileo three-parts brother to Frankel sparkles on Limekilns Royal approval: how racing has helped the Queen during Covid-19 pandemic Ascot slashes King George prize-money to £400,000 due to Covid-19 impact