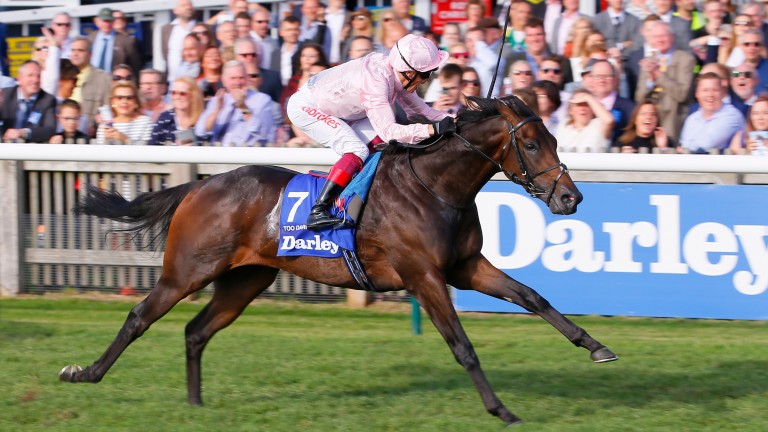 Too Darn Hot makes a belated return to action in the Dante Stakes
Mark Cranham
1 of 1
By Lee Mottershead and David Jennings UPDATED 8:11AM, MAY 16 2019

Andrew Lloyd Webber's unbeaten son of Dubawi spent the winter dominating the 2,000 Guineas market after ending his juvenile season with the same Racing Post Rating posted by the mighty Frankel as a two-year-old. However, the runaway Dewhurst Stakes winner failed to make the Newmarket Classic.

Instead, he makes a belated return as clear favourite for a wonderfully exciting Al Basti Equiworld Dubai Dante Stakes – but no longer as favourite for the Investec Derby.

In Epsom lists Too Darn Hot is now 9-2, one place behind Ballydoyle's Sir Dragonet. Whether he regains top spot in the Derby betting, or perhaps even swerves the Derby altogether, will be decided after he reappears under Frankie Dettori in a showpiece Gosden has claimed in three of the last four years – including with subsequent Epsom hero Golden Horn. 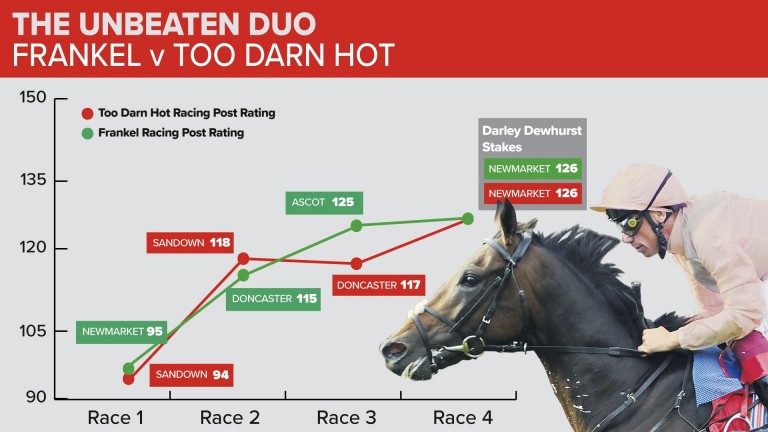 Gosden said: "This was not the original plan. We had a very dry spring and he popped a splint, so he missed the Greenham and there wasn't time to get him ready for the Guineas. Due to the interruption we're a little bit starting all over again.

"We've needed every day to get to this race and if I had another ten days I would be a lot happier – but I do not have another ten days. The Dante is here and it's the only race to run him in. He's certainly very full of himself and is quite a cheeky chappie right now. There is a lot of freshness in him, so going to the races should help to settle him.

JOHN GOSDEN IN THE DANTE SINCE 2015

"I've been pleased with his progress but he's coming to the race off an interrupted preparation, which is never ideal. However, the Dante is a trial and I'm treating it very much as a trial. The race will bring him on considerably, that's for sure."

Stressing that what comes next is far from certain, Gosden added: "If we feel he has run a good enough trial to go to the Derby, and we're happy with him in the days leading up to the race, he will go for the Derby. On the other hand, we may well conclude we should divert to Royal Ascot for the St James's Palace.

"We know a mile is absolutely fine for him, and a mile and a quarter will probably also be fine, but we'll know a lot more after he races at York."

"We're a little concerned as to whether he stays a mile and a quarter," said Gosden. "I forgave him his first run of the season as the ground was holding but his latest Epsom run did disappoint me."

Rewind a fortnight and Japan was the buzz horse from Ballydoyle for the Investec Derby. He was half the price of anything else trained by Aidan O'Brien and it seemed a foregone conclusion that Ryan Moore would ride him in the Epsom Classic.

Now the son of Galileo, who is a brother to Secret Gesture and Sir Issac Newton, finds himself behind stablemates Sir Dragonet and Broome in the Derby market and only a point shorter than Anthony Van Dyck after that trio all staked their claims by winning trials at Chester, Leopardstown and Lingfield last week.

Japan was a narrow winner of the Group 2 Beresford Stakes at Naas last autumn, a race O'Brien had previously won with the likes of St Nicholas Abbey (2009), Capri (2016) and Saxon Warrior (2017).

Japan: won the Beresford on his last start
Alain Barr
A word of warning, though, O'Brien has openly admitted that Japan had a setback last month and insists that he will improve for the outing.

O'Brien said: "Japan had a little setback about four or five weeks ago and we had to give him an easy week. He was a bit behind a few of the others fitness-wise as a result and that is why we decided to come for the Dante. It was the last of the Derby trials and it gave him every chance.

"He is in good form at home but he is just ready to start and we think he will improve plenty for the run."

Pros Won the Beresford Stakes last season, a race St Nicholas Abbey, Capri and Saxon Warrior all won in the past, and looks the type who will relish middle-distances this season

Roger Varian has always liked Surfman at home. He also liked what he saw when the colt sauntered clear by 14 lengths at Newcastle last month. Now he hopes to see a performance that puts Surfman bang into the Derby picture.

Bookmakers have taken evasive action, heavily chopping Surfman's odds for what will be the son of Kingman's first outing outside maiden or novice company. 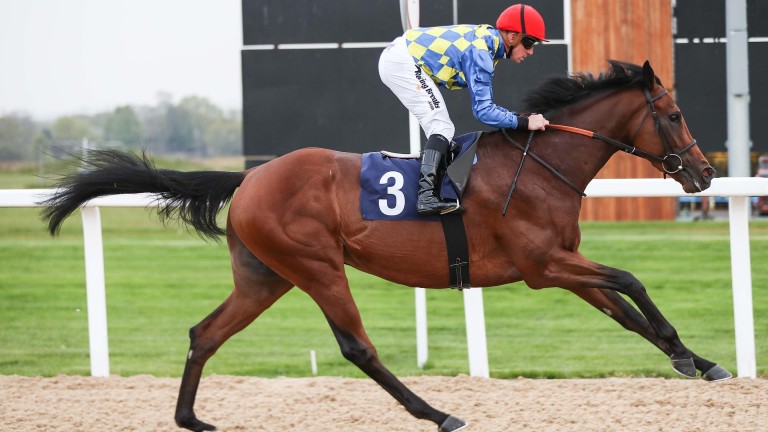 However, the Dante Stakes was a contest Varian was keen to target as soon as Surfman scored at Newcastle in the colours of his owner-breeder, the former trainer Peter Winkworth.

"I do think he is a very nice horse," said Varian. "Whether it's at York or some time in the future, I feel he will end up being really smart.

"The Newcastle race took the freshness out of him but he's still inexperienced, so he is going to learn a lot from the Dante. I think he could be a Derby horse but this is the race that will tell us."

Hughie Morrison finds himself in an unusual position, as runaway Windsor winner Telecaster heads into the Dante Stakes deservedly adorned with the "could be anything" tag.

Having chased home subsequent Derby trial winner Bangkok, Telecaster went on to Windsor, where he romped to victory by nine lengths under Oisin Murphy, prompting Morrison to describe New Approach's son as the best three-year-old middle-distance colt he had ever trained.

"I'm hoping he can show he is worth a place at the top table," said Morrison.

"Prior to his first run he had been going well but we don't have 25 Galileos or Dubawis in the yard. I'm surprised Too Darn Hot isn't the 1-2 favourite. Who would have said six weeks ago we would be running in the same race as Too Darn Hot and be only a 6-1 shot? If I had suggested that I would have been laughed out of the room."

At this stage Telecaster is not in the Investec Derby, for which his Castle Down Racing owners would need to pay a supplementary entry fee of £85,000.

Morrison added: "This year's 16-day gap between the Dante and Derby almost makes going for Epsom impractical but all things are possible. We are open minded about it because there is only one Derby.

"However, this could be a step too far too quick. By 3.15pm our situation could be deeply depressing."

Breeders' Cup winner is back for Appleby

Charlie Appleby last year fulfilled one of Sheikh Mohammed's biggest racing dreams when sending out Masar to become the first horse ever to win the Investec Derby in Godolphin's blue silks. If he is to win the race for his boss again this year, Line Of Duty looks to be much the likeliest candidate.

A most productive juvenile campaign ended when Line Of Duty landed the Breeders' Cup Juvenile Turf. He runs for the first time since then at York, where James Doyle replaces the currently sidelined William Buick.

Appleby, whose chief Derby candidate is a son of Coolmore's star stallion Galileo, said: "Line Of Duty’s preparation has gone well and we're looking forward to stepping him up in trip. We're confident he can run a big race.

"We had the option of starting him off in the 2,000 Guineas but didn’t want to run him over a straight mile, especially as his pedigree suggests he would be suited by further.

"He's a horse who is happier running at something rather than hitting the front too soon and we're hoping racing over middle-distances will play to his strengths."

Sir Michael Stoute has won six Dante Stakes, including with subsequent Derby winners Shahrastani and North Light, but bookmakers have been offering 20-1 about his Sandown maiden winner Almania.

Philip Robinson, racing manager to owner Saeed Suhail, said: "He has done very well over the winter and is working nicely. Ryan Moore has sat on him and been very pleased.

"This is a big ask but the owner was keen to run, and by doing so we're going to find out a lot about the horse."

Assistant trainer Charlie Johnston said: "He has come a bit from left field but he won very impressively at Newmarket and went up to a rating of 106, which narrows down his options. If he can finish in the first three that would warrant a look at the big one itself."

FIRST PUBLISHED 6:00PM, MAY 15 2019
We've needed every day to get to this race and if I had another ten days I would be a lot happier

Native Trail completes 2,000 Guineas treble for Charlie Appleby with Curragh win Blackbeard heads to top of Coventry market after impressive Marble Hill win Watch: 'She's a lovely filly' | Aidan O'Brien on What A Shout The curious Curragh boycott: where on earth are all the Irish Guineas horses? 'He gets the trip really well' - Aidan O'Brien on his leading Derby contenders The Queen's Reach For The Moon denied comeback win by tough My Prospero