Arrogate fails to reel in stablemate Collected in Pacific Classic 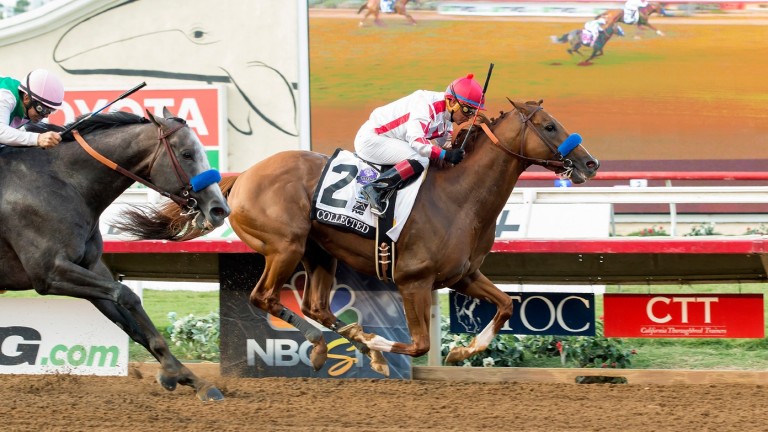 Collected (Martin Garcia) holds off the final-furlong challenge of superstar stablemate Arrogate to win the $1m Pacific Classic at Del Mar
Benoit Photo
1 of 1
By Nicholas Godfrey in California UPDATED 9:40AM, AUG 21 2017

So at least Arrogate did not lay another egg, to borrow trainer Bob Baffert's colourful turn of phrase. But the world's highest-rated racehorse did not win either, as he failed by half a length to catch stablemate Collected in the $1 million Pacific Classic at Del Mar.

While this clearly wasn't the prime version Arrogate, the one who recorded such a sensational Dubai World Cup triumph in March, then neither was the colt's performance anything like the listless display he had posted four weeks beforehand at the same venue, when the four-year-old flopped in Grade 2 company.

"Arrogate, at least he tried today," said Baffert, who admitted to feeling "weird" after a one-two that did not feel much cause for celebration given the finishing order.

"He's getting there but I think when I ran him in the San Diego, it messed up his psyche a little bit. It's not the Arrogate we're used to seeing but off this run, as long as he's healthy, I certainly have a lot more confidence for the Breeders' Cup."

Sky Bet and Paddy Power made Arrogate a 3-1 chance (from 13-8) for back-to-back Breeders' Cup Classic wins following his second defeat of the campaign, while bet365 shortened Collected to 7-1 (from 16).

On a track favouring front-runners, the 3-1 second favourite Collected made all to score under Martin Garcia in a sharp time of 2m0.70s.

After a slightly awkward start, Arrogate – an uneasy market leader at 3-5 on the US tote – stalked three wide throughout before looking in trouble on the backstretch when asked to make up ground on Collected and his recent conqueror Accelerate.

Even Arrogate's most ardent admirers would struggle to describe the response as immediate, and Collected still held a three-length advantage as they entered the final furlong, by which time Accelerate had nothing more to give.

Arrogate finally got his long stride into gear to chase his stable companion but the Del Mar stretch is barely a furlong and a half long, and the post came just too soon for the biggest prize-money earner in racing history.

It was Martin Garcia, and not Mike Smith, who was giving the fist pumps at the wire. Accelerate was nearly four lengths behind Arrogate in third.

"I could feel Mike's horse coming," said Garcia. "It was like an animal creeping up behind me but we had enough to get it done." 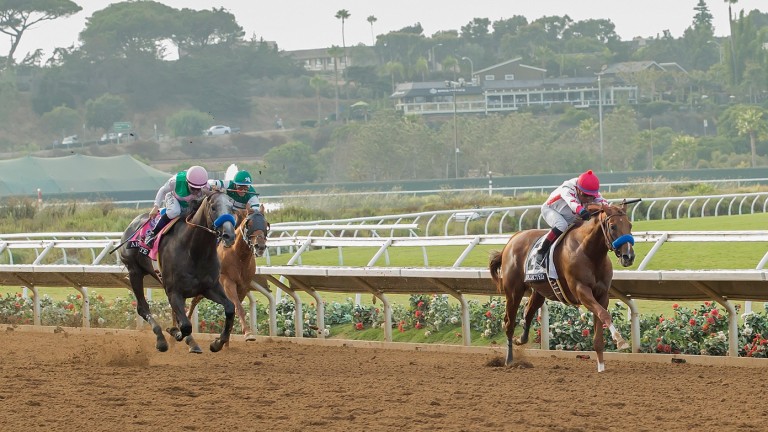 Three lengths down at the furlong marker, Arrogate (left) reduced the margin to a half-length behind Collected in the Pacific Classic
Benoit Photo
Smith was left looking for positives, saying: "If he just improves a little bit, we'll be all right. He was a lot better today than last time, just not good enough."

Baffert seemed both crestfallen yet somehow relieved at the same time. "I feel like my older son got beaten by my younger son," admitted the trainer.

"For a while he looked like he was gonna have another flop so I was happy when he dug in," Baffert added. "That last eighth he was just throwing it down there – he wanted it badly. It's not the track or the surface – that's got nothing to do with it. He was still quiet beforehand, not his usual self, but I really think he can come back.

"I felt a lot of pressure today," he went on. "I didn't see him doing what he did last time but I was so afraid. I feel so much better with the way he ran today - he had to show something and there's no shame being beaten by Collected.

"He's been working so well and he's a good horse. I don't want to take anything away from Collected - he's a deserving winner. His weapon is his speed. We knew he was faster than Accelerate and when they were down the backside, I thought he'd be hard to beat."

Given that the Pacific Classic is a 'Win and You're In' race for the Classic as part of the Breeders' Cup Challenge, the two stable companions may well be locking horns again back at the same venue on November 5.

"We were expecting to see something else but Arrogate showed up a little bit," added Baffert. "He was running at a target but the target wasn't quitting!"

The trainer compared the race to the shock defeat of American Pharoah in the Travers Stakes behind Keen Ice after his Triple Crown sweep in 2015.

"I was proud of Arrogate trying to get there and this race today was a lot like American Pharoah's race at Saratoga," he explained. "He dug in, he ran well, he got beaten by a good horse."

Collected, a son of City Zip, was winning his first Grade 1 as he extended his unbeaten record to four this season. "Obviously this is a big thrill," said Peter Fluor of owners Speedway Stable.

"Arrogate is a legend and I'm a big fan so I guess you'd say I'm a bit humbled by all of this, but I'm very proud to beat Arrogate."

Arrogate v Frankel - how do they match up?