David Jennings with his first update from an adventure down under 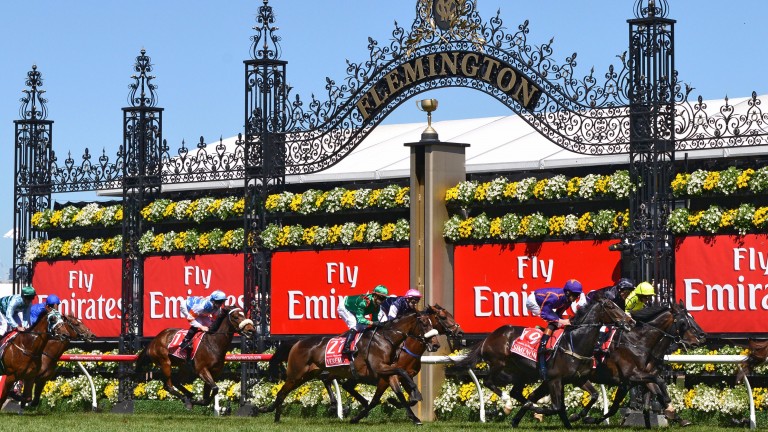 The Racing Post has dispatched Ireland correspondent David Jennings to Australia for a month-long assignment to cover the Spring Carnival, building up to its highlight, the world-famous Melbourne Cup, on November 7 at Flemington. Fresh off the airport tarmac, here he delivers the first of his bulletins from down under – be sure to keep up to date with all the news, sights and sounds from a unique occasion over the coming weeks at racingpost.com

Ostriches know more about flying than me. A lifetime of being brainwashed by Ryanair bargains meant that affluence in the air was not something I was aware of. Until now.

I just smiled back at the woman on the gate upon being informed that I had been upgraded from economy to business class for the 13-hour flight from Dubai to Melbourne. If I knew then what I know now, I would have bear-hugged her.

My knees never got near my chest. The seat moved any way you wanted. There were pillows, blankets and headrests. There were cold drinks, hot drinks, warm drinks, lukewarm drinks. And a menu. As many courses as you liked. Dangerous when you have a very accommodating stomach like mine.

After deliberating as we crossed Colombo, I finally opted for the butternut squash and sweetcorn chowder, seared beef tenderloin and pineapple and ginger cake. I had only swallowed the last slice of the cake when breakfast arrived.

I was supposed to sleep. I never got a wink in. It is Jed Mercurio's fault for creating the most enthralling TV series ever made. I'm a notorious flicker. On the couch at home, I might flick between seven channels in seven minutes. Concentration levels are low. The sole exception being Line Of Duty.

The first two series were swatted away in the space of a week but the third and fourth have yet to appear on Netflix. Emirates had them. Six and half hours watching series three. Six more watching series four. Time flies when you are flying.

We touch down in Melbourne shortly after 7.30am. My hotel is in South Yarra, the posh part of the city apparently, and I sneak in a quick snooze before heading out to the offices of Racing Victoria beside Flemington to pick up everything, including a hired car.

I'm no Jeremy Clarkson by the way. I wouldn't like to be either but I would love to know more about cars. This one is white and I think the make is Toyota but I'm not overly sure. Then comes the devastating news, delivered with nonchalance from the lovely and most helpful Jane Rogan, logistics manager with Racing Victoria. “It's automatic,” she says. I freeze.

Automatic? How on earth do you drive one of those? And where is the clutch? And is the brake in the middle or on the left? Do I use my left foot or my right to brake? And how do you put it in reverse? This is a nightmare of epic proportions.

You can do this, David. I completed a game of Sudoku once, so I can definitely drive an automatic car. I've been told to follow Roy Li, my colleague from Hong Kong. He's pulled in waiting for me. I've managed to find reverse but the car is moving backwards slower than a sumo wrestler. It's incredibly sluggish. My foot has nailed the accelerator to the floor but progress is slow. It has taken about two and a half minutes to reverse about four yards.

I finally give up, get out and jog down to Roy to explain the situation. He must think I'm an idiot. He will be proved right by the end of the Spring Carnival but I was hoping the truth would take time to come out.

Alas, the handbrake was still on.

We finally get going and head back to the hotel via the outskirts of the city. That was surprisingly straightforward. The white car is parked safely. Time to relax. Not yet. I've lost my room key. I've only had it a couple of hours.

Roy to the rescue again. It fell out of my pocket and he spotted it. You know how Roy got the name Roy? He picked it himself.

We chat while tucking into a burger (well, I had a burger and Roy had a salad) and he explains that kids in Hong Kong pick their own English names, usually before the age of ten. Roy Keane was his hero so he picked Roy. If I had been born in Hong Kong I would now be called Jamiroquai Jennings. I loved that Virtual Insanity song when I was about ten.

So what's the strangest name Roy has ever heard in Hong Kong? “Manchester,” he replies.

Time for some studying ahead of the cracking Caulfield card on Saturday. Willie Mullins runs Riven Light in the Ladbrokes Stakes. Maybe this is my heart ruling my head but 16-1 looks a huge price. I'll be having a bit of that.

Is that the Fastnet Tempest I know running in the 7f handicap at 4.40? It couldn't be. It is you know. He did me a serious favour in the Victoria Cup at Ascot back in May and William Haggas has his team in terrific shape so I can hardly desert him now.

The Ladbrokes Caulfield Guineas is worth a whopping £701,754 to the winner and I have a sneaky suspicion that a filly could win it for the first time in 41 years. Catchy is trying a mile for the first time but her sister won over 1m3f so she could relish it. Connections have swerved the much less valuable Thousand Guineas and they might be rewarded you know. She's in stall three too. What's not to like? It is a catchy name too.

Sleep time. My maiden voyage to Caulfield comes tomorrow. The handbrake is finally off.

Fancy seeing an Aussie racing rookie turn $100 into $1,000 during his stint at the Spring Carnival? Stayed tuned so.

Never been to Australia before, never even heard of Alizee (hot favourite for the Thousand Guineas at Caulfield) and have no real idea of who or what to watch out for – yet the mission is most definitely possible. The toughest challenges are the best ones.

I've been given $100 in the hope that it will turn into $1,000 by the time I fly back to Dublin on November 11. The journey begins at Caulfield on Saturday with three wagers.

The first of those is Aloft in Saturday's Ladbrokes Herbert Power Stakes (4.05), a Group 2 over 1m4f. The ex-Aidan O'Brien-trained stayer spent over a year on the sidelines before returning to make his Australian debut at Moonee Valley in September of last year.

You get the sense that this lucrative pot has been on Robert Hickmott's mind ever since he acquired Aloft.

His first trip to Flemington was a winning one in August and he caught the eye when third over this course and distance last month. He should take some stopping and is worth wagering $10 on.

There is a strong overseas challenge in the Ladbrokes Stakes (5.50) and perhaps Riven Light has been overlooked in the market at 20-1.

He has done nothing but improve since switching to the Flat for Willie Mullins and would be chasing a five-timer were it not for getting caught in traffic on his second outing at the Galway summer festival.

Mullins' assistant David Casey reports him in top form and he looks by far the best of the Irish. There should be a strong gallop for him to chase and, if Glen Boss can find the gaps, he should be in the thick of things when it matters. Lets have a tenner on him too at 20-1.

Finally, the filly Catchy is crying out to be backed in the big one, the Ladbrokes Caulfield Guineas (6.30).

Connections have resisted the temptation of running her in the Thousand Guineas earlier on the card as they go in search of the big bounty. She has never run over a mile before but her full-sister won over 1m3f and the daughter of Fastnet Rock could excel over it.

She gets 5lb from the boys and is drawn in stall three. Her form looks rock-solid, most notably beating Booker in the Danehill Stakes at Flemington last month, and it could be a first success in the race for a filly for 41 years.