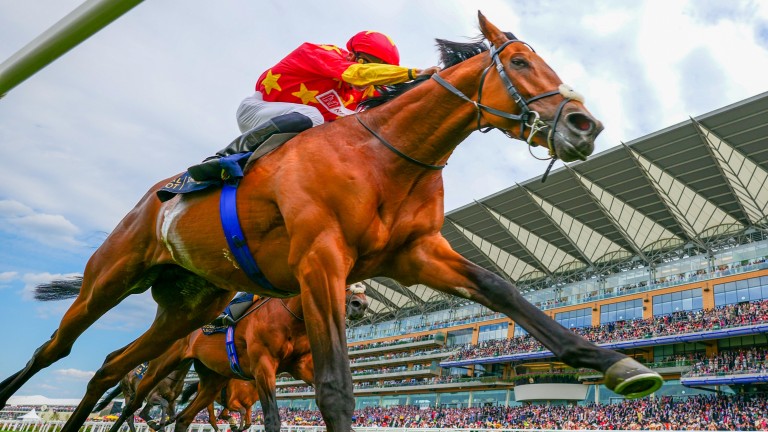 Four-time Group 1 winner State Of Rest joins the Rathbarry Stud roster for 2023, and the top-notch four-year-old has been given an introductory fee of €25,000.

The son of Starspangledbanner - who assisted his sire when it came to a good 2022 and whose fee has risen to €50,000 from €35,000 at Coolmore -  was bred by Tinnakill Bloodstock out of Quiet American's daughter Repose and commanded 45,000gns as a foal and 60,000gns as a yearling at Park Paddocks.

That proved money extremely wisely spent as State Of Rest did not rest on his laurels and won at the top level on three different continents for the Joseph O'Brien yard.

He struck in the Saratoga Derby and Cox Plate last year as a three-year-old, and closer to home in the Prix Ganay and Prince of Wales's Stakes this year, all over around ten furlongs.

The decision to revert to a mile in a red-hot Jacques le Marois unfortunately backfired, and it proved to be his last race, but State Of Rest still starts life as a stallion having been one of the very best middle-distance performers of the last two seasons.

In terms of pricing, leading the way at the County Cork stud is Acclamation, who will stand 2023 at €27,500, as he has for the past couple of seasons.

The son of Royal Applause has provided sterling service at Rathbarry since 2004 and continues to deliver the goods, his four-year-old son Romantic Warrior winning the Group 1 QEII Cup at Sha Tin this year.

He is also the sire of course of Group 1 winners and current stallions Dark Angel, Aclaim, Expert Eye and Equiano.

Kodi Bear lends strong support to his studmates and will stand 2023 for €15,000, the same fee as this year, when it was boosted following some fine results.

The reliable Go Bears Go has continued to fly the flag this year, while Ever Given is a Listed winner and came close to a Group 3 score in the Prix du Pin when beaten a length into second.

Also on the teamsheet is Exceed And Excel's classy son James Garfield, who will be available at €4,000, as in the past two years.

Maria Branwell has been something of a star for the first-season sire this year, winning the Listed National Stakes and running third in the Queen Mary.

No Nay Never heads the Coolmore pack at €175,000 after fruitful top-level haul

FIRST PUBLISHED 4:16PM, NOV 11 2022
The son of Royal Applause has provided sterling service at Rathbarry since 2004