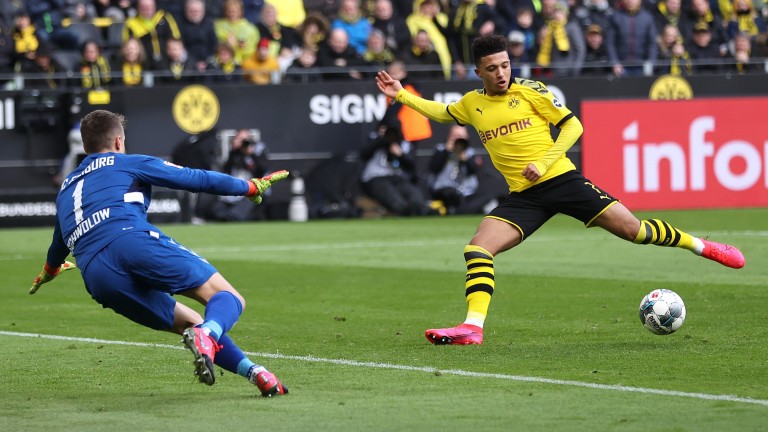 It was a funny evening on Wednesday when the Premier League trophy was finally presented to Liverpool at Anfield.

It all turned into a bit of a damp squib because the club has such a close connection to the fans and there the players were, getting their hands on the prize with no one to show it off to. No lap of honour, just a load of interviews to do.

But it was a good performance in beating Chelsea 5-3 but life moves on and their attentions must now turn to how they can build on their success.

It is going to be hard after winning the Champions League and 97 points last season, a total they can eclipse if they win at Newcastle on Sunday.

And that does not take into account that, as arguably the best club team in the world, they are going to have a target on their back.
So how can they become even better?

If Liverpool ask you to sign for them with their standing in the game at the moment, it is the ultimate compliment to any footballer. We don’t know what the state of the finances are but for players coming in, opportunities are going to be limited at the moment.

Jurgen Klopp knows who is in his best defensive unit and the front three pick themselves. So that leaves five or six players fighting for the three spots in midfield.

There is not a lot of room for anyone to come in and stake their claim. You might play five of six games and then not feature and Klopp seems to be the master of keeping everyone happy.

Left-back is an area they need to bolster as James Milner is covering for Andy Robertson but I’ve got real issues about what is going to happen at the other end of the pitch.

I cannot see how Roberto Firmino, Sadio Mane and Mo Salah can keep going at the intensity they have shown over the last two seasons.

They just play so much football, and not just for Liverpool. They have international commitments as well and for all of them that means travelling long distances.

If they have the money then the player I would go for is Jadon Sancho.

He would fit ideally into the system and next season would be the ideal time to blood him, unless there are injuries to the forward line and he was thrown in earlier than that.

Maybe they could offer some players in part exchange to Dortmund as part of the deal because the biggest difficulty we have at present is knowing what the transfer market is going to look like.

Liverpool have a gap for a fourth forward option and Sancho would definitely fit the bill.

He could put Salah and Mane under pressure to perform. They have been brilliant but they haven’t really had anybody pushing them.

We haven’t seen much of Takumi Minamino yet while Curtis Jones and Rhian Brewster are promising, but you need a fourth striker.

You only need look at that great Manchester United side which had Andy Cole, Dwight Yorke, Teddy Sheringham and Ole Gunnar Solskjaer.

Timo Werner would have been a great fit too but the competition for places may have put him off and tipped the balance in Chelsea’s favour.

You need players who can cope with that situation. But a season to settle at Anfield would do Sancho the world of good and then he could really kick on.

I suppose one of the players who could have filled the Firmino role more often was Adam Lallana.

I felt it was a real shame he couldn’t get on against Chelsea and he looks to be on his way out of Anfield.

He suffered from being not one thing or the other. He could have played in the Firmino role if he had been handed more opportunities, but he just wasn’t quite as good and it is the same thing as a midfielder.

He played in a sort of number-six role against Lille in pre-season and looked good but he’s just not quite up to Jordan Henderson’s level.

You want someone like Lallana creating things rather than tearing around using up loads of energy. I think sometimes he slowed the game down a bit too much.

But he had a great attitude and the manager loved to have him in the dressing room. Liverpool need to keep that going if they are to build on these great times they are having.

No need to panic at Arsenal

Gunners fans will probably be alarmed at the sight of their team finishing outside the top six but my advice would be simple: just write the season off.

I have no doubt they have the right man in charge at the Emirates. Mikel Arteta has had a great schooling under Pep Guardiola and I have been impressed with the way he has handled it.

Like Frank Lampard, he should benefit from his links to the club. He lost just three of 18 matches and I think he has given Arsenal an identity. He's not frightened to make big decisions.

They have an excellent chance of pushing for a Champions League place next season.

Sure, there are things that have to improve. There is dead wood at the club that needs removing but while it might be difficult to get Mesut Ozil off the wage bill, I have faith that Arteta can make the right decisions.

The young players look promising and it will be interesting to see what happens with Pierre-Emerick Aubameyang.

It really could go either way. He could be settled in London but Arteta might think if he can get £60 or £70 million for him then that could go quite a long way in his rebuilding project.

Otherwise, he is a 20-goal-a-season striker and there are not many of those around.

They have reached a cup final as well and produced good football in beating both Manchester City and Liverpool in the last week.

Losing to Aston Villa was a disappointment but I still think they are heading in the right directions. There is definitely no need to panic.

Leeds can be inspirational

It’s great to see Leeds back in the Premier League and I suppose they are back where they belong.

The fanbase is massive and they are a huge one-city club, even if Elland Road might not be as great as some of the other stadiums we see nowadays.

I’m looking forward to seeing Marcelo Bielsa in the top flight. I’m a massive fan of characters like him, and someone who is so outspoken and has his own way of doing things could be great for the Premier League.

That is if he doesn’t decide that his work at the club is done, but I hope he sticks around.

Leeds have finally settled and discovered the right recipe which plenty of clubs could learn from – a prime example being my old club Sunderland, who are looking at a third successive season in League One.

You cannot keep chopping and changing all the time and now is the time for them to lay the foundations and look at a different way of doing things. You can’t just jump from one set of owners to another or one manager to the next and expect things to improve.

It’s still a great club with a brilliant stadium but they need stability and a vision of how to do things.

They could tap up other clubs for good young loan players who are eager to get an opportunity. Perhaps see if Steve Bruce has some good youngsters at Newcastle who want to be out there playing.

Throwing money at a situation is not always the answer. They need a blueprint and to build again. Others have proved that, with time, you can get there.

Villa are in the driving seat

That was a massive win against Arsenal for Aston Villa and I fancy they will get the job done at West Ham, especially as the Hammers have got their towels by the pool already.

It baffled me that Watford decided to sack Nigel Pearson, although there are plenty of rumours about rows behind the scenes.

They got themselves in a great position by beating Norwich and Newcastle and while they struggled at West Ham, they seem to have shot themselves in the foot. I can't see them getting anything at Arsenal.

Villa have come good at the right time and Bournemouth's hopes have been dealt a blow by Everton's Carlo Ancelotti reading the riot act. I think they are doomed.

Timing can be massive in football and it has just come right for Villa. I think Dean Smith's side will finish the job.