Jason McAteer: Manchester City are not certain to sweep aside Aston Villa

Problems mounting for Pep Guardiola at the Etihad 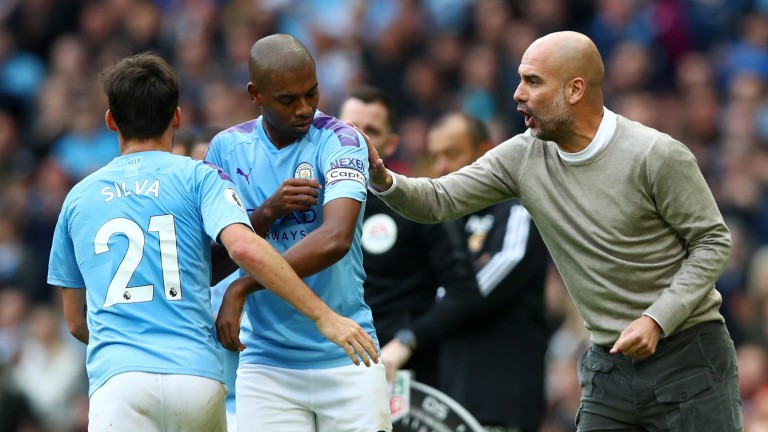 Credit to Manchester City for coming back to win at Real Madrid in the Champions League – but that doesn’t mean they are certainties to beat Aston Villa at Wembley in Sunday’s EFL Cup final.

Pretty much everyone expects City to walk all over Villa, just as they did to Watford in the FA Cup final in May.

But I don’t see that at all because things have changed at The Etihad in recent months, things that are beginning to take their toll.

It’s definitely not all rosy at City at the moment no matter what is said in public.

I don’t think Pep Guardiola is as content as he’s making out. He’s still adjusting to life without Mikel Arteta and he’s having to suffer the indignity of losing the Premier League title even though there’s still plenty of the season left.

There’s the looming European ban and the transfer implications that go with that – there just seem to be problems everywhere you look.

So the win at Madrid, especially the manner in which they achieved it coming from behind, was a big plus although Real Madrid were there for the taking. I think Zinedine Zidane had one eye on the Barcelona game at the weekend and picked his team accordingly, and anyway Real aren’t a great team at the minute.

But the tests for City are yet to come in the Champions League and I feel that at some point they’ll fail it.

Guardiola was brought to City to win the Champions League and that puts a massive amount of pressure on him, his staff and his players every time they go into a European game.

And you can want something too much. They are so desperate to do it that when they get to the latter stages of the competition there’s an element of tightening, of them not handling that pressure.

Questions are being asked about the mentality of that team and I think mentally they are quite fragile.

So yes, they should beat Villa at the weekend and certainly Guardiola will want some silverware banked now that the title has gone.

But we’ve all seen upsets in football. City were on the wrong end of one against Wigan in the 2013 final and I remember playing against Liverpool for Bolton, then a Championship side, in the League Cup final in 1995.

On paper they were far the better team but it needed a brilliant goal from Steve McManaman to separate the teams. Villa will enjoy being the underdog – it’s all about how City cope with being favourites.

Aston Villa look to be leading the chase for Daniel Sturridge. Is there still a Premier League future for the former England frontman?

Few Liverpool fans will forget that amazing 2013-14 season when Daniel Sturridge and Luis Suarez paired up to forge one of the best partnerships I’d seen in the Premier League for many a long year.

Suarez scored 31 in the league, Sturridge 21 and there was a really healthy competitive rivalry with them.

But while they were both very competitive, they also clicked and the understanding between them was very special.

Now, of course, Sturridge is 30, has suffered his share of injuries and a return to the Premier League might not be straightforward.

Put it this way, if Villa boss Dean Smith was thinking of getting Sturridge in to help keep them in the division, then I’m not sure he’d be the right man.

You have to play to Sturridge’s strengths to get the best out of him. He doesn’t want to track back and do the pressing, he wants to hang around the box, get the ball in the final third, make the runs he wants to and get the ball to his feet.

That can frustrate managers and if he’s not doing the dirty work strikers have to do these days then do you really want him in a dogfight? I’m not so sure.

If Villa go down, however, then yes, I’d take a chance on Daniel Sturridge because he could be a prolific goalscorer in the Championship.

West Ham almost put an unlikely spoke in Liverpool’s title charge. How much was Liverpool’s performance down to the absence of Jordan Henderson?

There are only two players in the Liverpool team who are irreplaceable – Virgil van Dijk and Alisson.

Take either of those two out of the starting 11 and Liverpool are instantly weaker.

Take anyone else out, however, and it’s a different story – and even though I am a massive fan of his, that includes Jordan Henderson.

Jurgen Klopp has so much cover in all areas that he can afford to lose key men for periods.

When he lost Fabinho earlier in the season I remember the gasps and there were plenty of people saying he’d lost the most important cog in the midfield, the heartbeat of the team. Well yes, he was a miss – but have a look at the league table.

I never doubted that Jordan Henderson could take on the Fabinho role because he’d done it successfully before and he didn’t let anyone down.

And since then, of course, Jordan has become an absolutely central part of the team – but not irreplaceable. At least, not in terms of his playing ability.

Where Jordan is missed – and we saw that against West Ham – is in terms of leadership.

I thought Liverpool were in second gear during the first half against West Ham and Jordan Henderson would not have allowed that to happen.

When West Ham equalised it seemed to shock Liverpool. You could almost sense the players were saying "well that wasn’t supposed to happen, we’re supposed to go on and score three or four more".

That’s a good, positive mentality to have, but when a team does score against Liverpool Henderson is the man who reminds the players that they need to roll their sleeves up and he brings them back to earth. He screams at players and points fingers and they didn’t have that on the pitch on Monday night.

It was left to Jurgen Klopp to do the shouting and screaming at half-time and he got the right response.

Henderson doesn’t always have the best of games and people are always quick to point fingers when that happens, but that’s not appreciating his value.

When it comes to desire and character that’s when he steps up and while there are some big characters in that dressing room none is bigger than Jordan Henderson.

The fixtures are coming thick and fast for Liverpool which brings the usual rotation conundrum for Jurgen Klopp to solve. Does that mean he will rest players at Chelsea in the FA Cup?

Sadly – because I’m a massive fan of the FA Cup – the trip to Chelsea falls at the wrong time for Liverpool and Jurgen Klopp will undoubtedly make changes.

I think it will be a half-and-half team – I don’t see him sending out the teams he deployed at Villa in the League Cup or against Shrewsbury in the fourth-round replay. That would be unfair at Chelsea.

But the Atletico Madrid tie is on a knife-edge and there’s still a league title to be won so Klopp’s hands are slightly tied.

So that means chances once again for Curtis Jones, Harvey Elliott and Neco Williams, although I can also see Klopp picking one or both of Joel Matip and Dejan Lovren, plus players of the calibre of Adam Lallana and Divock Origi.

So it’ll be a decent Liverpool side but if you're having a bet, you’d naturally presume Chelsea will be too strong.

Frank Lampard will see this draw as a golden opportunity to make the last eight and he’ll have his sights on winning the FA Cup, especially with their Champions League dream pretty much in tatters.

I’d never write Liverpool off but I think Chelsea will edge it.