Chris Waddle: Time for Jose Mourinho to give Troy Parrott a shot at Tottenham

Jack Grealish is in a win-win situation 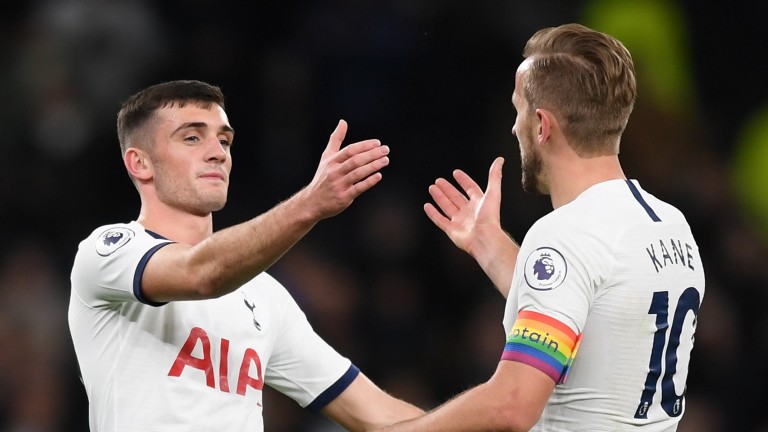 You only need to look at the likes of Wayne Rooney and Marcus Rashford to see what can happen if you take an early punt on a young striker.

Rooney was just 16 when he scored for Everton in the Premier League against Arsenal with Arsene Wenger hailing him the brightest talent this country had.

Injuries offered Rashford a chance when he was a teenager and he scored two goals in a European game for Manchester United, kept his place and scored two more against Arsenal three days later.

Sometimes you have to give a young striker a go – and now’s the time for Jose Mourinho to give Troy Parrott a shot.

And that means at the very least sticking him on the bench at Chelsea on Saturday.

If Wednesday night’s Champions League match against Leipzig taught us anything it’s that Tottenham don’t have an alternative number nine with both Harry Kane and Heung-Min Son injured. Other players can’t simply be shoehorned into that role.

Dele Alli and Lucas Moura don’t understand what’s expected up front and get frustrated. They start chasing the ball into wide areas and playing a different game and then there's no presence around the box.

I’m sure Alli’s tantrum after being subbed in that game was simply down to frustration at his performance in a role he didn’t want to have. Mourinho could have taken four or five others off.

The way Spurs play they need a number nine and Parrott is that option right now – and I don’t care that he’s only 18.

Let’s not forget that he’s a full international – he played for Ireland against New Zealand in November – so he’s not a stranger to playing at a high level surrounded by top players.

I don’t think Mourinho has much choice or Tottenham’s top-four prospects could be in real trouble.

He complained on Wednesday that several of his players are jaded and fading. Well, Parrott isn’t.

He could be the answer and  Spurs fans would give him a chance. They’ll be right behind him because he’s one of their own having come through the academy.

It’s hard to question Mourinho because of everything he has achieved down the years but I’ve never quite got his reluctance to take chances on kids.

If Mourinho thinks Parrott is going to be so good in three years that he deserves a new contract, then he should have faith in him being good enough now.

Would Jack Grealish be a better fit at Tottenham or Manchester United?

Jack Grealish is a fantastic player with a massive future – but don’t presume that he’ll be a hit wherever he goes next.

It’s almost a win-win situation for Grealish at the moment. As a Villa fan, he would love nothing more than to help the club he supports stay in the Premier League and maybe win a cup as well.

But if it does all go wrong and Villa are relegated then he knows there will be a queue of clubs clamouring to sign him.

Tottenham would love to sign him, so too Manchester United but he’s a Birmingham lad, born and bred, and he might not naturally settle away from his comfort zone.

In terms of pure talent, though, Grealish is a superstar.

What’s incredible is that he is running the Aston Villa show at the moment from an inside-left position, almost a left winger. To have that much influence from out that wide is truly remarkable.

But that’s because he has grown up as a player and a person and giving him the captain’s armband has been the making of him.

He used to get lots of plaudits but they were almost based on potential. Now, having helped Villa into the top flight and led them to a cup final, the praise looks well placed. And he has revelled in the responsibility of being their captain and leader.

If I was his boss, I’d still have him in effectively the number ten role and pulling the strings more centrally with a licence to play pretty much wherever he wanted.

And he needs to sustain his performances if Villa aren’t to go down.

But he’s now at the point where surely Gareth Southgate cannot overlook him any longer.

England need creativity and I’d be amazed if Grealish isn’t starting for England against Italy next month.

Can Spurs turn around their Champions League tie against RB Leipzig?

Leipzig will have flown home on Wednesday night delighted with the 1-0 win because they were much the better team – but they’ll be devastated they haven’t put the tie to bed.

Tottenham are a funny team and you can be sure Julian Nagelsmann and his men will be acutely aware of that.

Don’t forget, this is all new territory for Leipzig.

They look a really good side under a very capable manager and they clearly played Tottenham at a good time.

But who’s to say the pressure of the occasion won’t get to them in Germany? And who knows how they will react if Tottenham score first?

Remember, Spurs were written off going into their semi-final second leg against Ajax last year and that was still the case going into the closing seconds of the game.

But they conjured something out of nothing, a moment of class, and the next thing they were celebrating and through to the Champions League final. Having been there before in situations like that is a positive.

A 1-0 scoreline is really nothing and Spurs will be really good value to go through.

You wouldn’t want anyone else in charge than Jose Mourinho for this kind of match. In the 2009-10 semi-final when he was in charge of Inter they got the job done against Barcelona.

At the moment there’s so much negativity around the Tottenham Stadium after their recent results and injuries but it might look a bit different in a few weeks.

They are definitely still in the tie.

Is second place still up for grabs when Leicester play Manchester City?

It has been a tough week for Manchester City with the news of their European ban and it must be dispiriting for them to be so far off Liverpool’s pace in the title race.

But they were all over West Ham on Wednesday night, winning well, and I have no doubt they will finish second.

I also think Leicester will make the top four – but whatever happens this weekend they still look a notch or two below both Liverpool and Manchester City.

They have had an incredible season and know they’ve got the players to hurt Manchester City, and Pep Guardiola will have to juggle his team with their Champions League tie against Real Madrid coming up next week.

But City look like a team out to make a statement and they will get chances against Leicester.