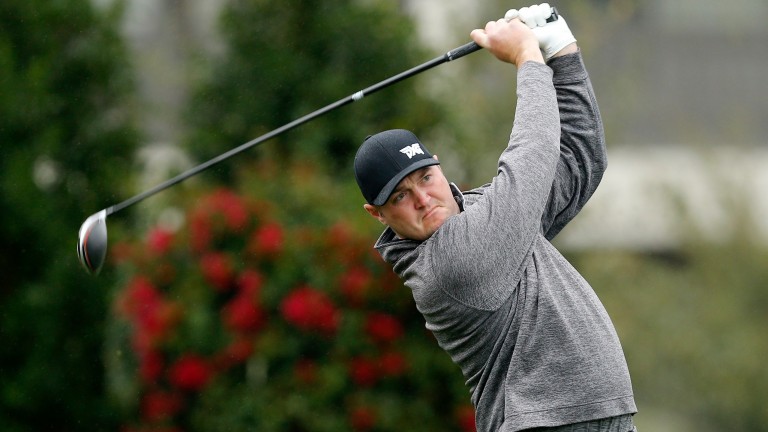 Jason Kokrak can be fancied for his Saturday twoball
Michael Reaves
1 of 1
By Steve Palmer 9:31AM, MAY 1 2021

Keegan Bradley and Sam Burns are tied for the lead at the halfway stage of the Valspar Championship, both reaching 12 under par at the Copperhead Course, Palm Harbor, Florida.

Bradley and Burns, 75-1 and 90-1 ante-post, have built a four-shot advantage over the rest of the field, while the two highest ranked players in the world have left themselves much work to do over the weekend.

Dustin Johnson is nine shots off the pace, drifting from 11-1 to 60-1, while Justin Thomas is ten behind and has gone from 9-1 to 80-1. Bradley and Burns are general 5-2 joint-favourites.

Patrick Reed, Phil Mickelson, Justin Rose and Gary Woodland were among those to miss the cut. Paul Casey, chasing a Valspar hat-trick, is nine shots behind.

Keegan Bradley has made a habit of fast starts and poor finishes in the Valspar Championship, while Sam Burns has closed with a 73 and a 74 in his two previous visits to the Copperhead, so it is far from certain that the two players dominating the halfway betting will kick to the line.

Bradley is an experienced campaigner with four PGA Tour titles under his belt, including a Major, so he will probably feel a little miffed to be slightly bigger in the betting with some firms than maiden Burns.
Third place in the Genesis Invitational in February, though, was a strong recent performance from Burns. Bradley has not placed since the low-grade Sanderson Farms Championship in October.

The 11-4 about Bradley, who holed out for eagle from 115 yards at his final hole of round two, appeals slightly more than the 5-2 Burns, but the value at this stage may lie with Genesis Invitational champion Max Homa at 14-1.

It is not difficult to imagine a tight, tense final Saturday twoball comprising Bradley and Burns. Bradley can be a difficult playing partner at the best of times - generally slow and angry - while Burns is moody and typically humourless. If the tide turns, it could turn spectacularly, and Homa seems likely to be waiting to take advantage.

The big question mark against Homa this week was his bemusing course record, which reads MC-MC-MC. Given how well he typically drives the ball, Copperhead should suit, so the previous problems did not make sense. But given the context of his previous world rankings, the upturn in performance this week is understandable.

Homa's world ranking going into his previous three Valspars was 765th, 272nd and 434th. This time, he is number 41, having won the 2019 Wells Fargo Championship and the 2021 Genesis Invitational since his last Valspar visit.

Homa is just a much better and more confident player since he last tackled Copperhead - and Florida has become his home. His three-wood has become ultra-reliable and from four shots behind going into the weekend he can be expected to set up a winning chance for Sunday.

Jason Kokrak, who boasts a superb record at the Copperhead and finished second in the previous edition, looks the pick of the third-round twoball options against Joaquin Niemann (6.05pm UK and Ireland time).

Bradley and Burns are scheduled out at 7.05pm. A sunny, hot day, with light to moderate breezes, is forecast.