Say goodbye to the summer with a scorching hot Juddmonte International 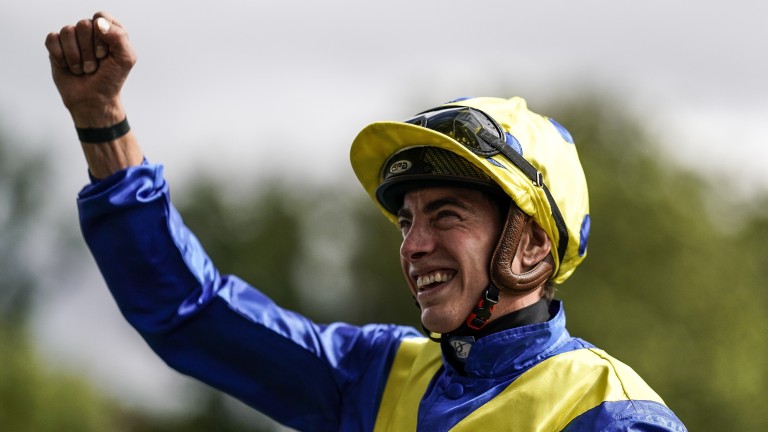 Saying goodbye to the summer is never easy, but four fabulous days on the Knavesmire makes buying school uniforms and cutting firewood a little more bearable.

The Ebor meeting does not build up to a crescendo. Instead the highest and sweetest note of all arrives on the opening afternoon as eight classy colts who have won 40 races between them, including 12 Group 1s, and accumulated more than £15 million in prize-money, enter the stalls for the 47th running of the Juddmonte International (3.35).

It is another chance to see the how the Classic generation fare against their elders. Roaring Lion and Saxon Warrior dominated the finish to the Coral-Eclipse at Sandown last month but this time they have Poet’s Word to worry about.

Sir Michael Stoute’s five-year-old has been the surprise package of the summer so far, cracking the Cracksman code in the Prince of Wales’s Stakes at Royal Ascot and gunning down Crystal Ocean close home in the King George. He is now rated 130 and deserves to be favourite.

Poet’s Word has amassed £2,722,891 in prize-money but, surprisingly, he is not the highest earner in the race. Not even close. Thunder Snow is Mr Moneybags, the Dubai Cup winner with £6,302,421 in his bank account.

Seven of the eight runners have already won Grade 1s, the exception being Thundering Blue, who is a course specialist with form figures of 121 at the venue.

You can back the Irish Derby winner Latrobe at 16-1. That tells you all you need to know about the quality of the Juddmonte International.

The original was outstanding. Staged at Donny, the Racing Post Trophy was the scene for Aidan O’Brien’s record-breaking Group 1 haul as Saxon Warrior rallied to snatch victory from the jaws of defeat at Roaring Lion’s expense. A neck was the winning margin.

The sequel was fascinating. The first Classic of the season went to Ballydoyle as Saxon Warrior stamped his authority on the 2,000 Guineas passing the two-furlong pole and stretched clear for a decisive success. Roaring Lion edged left under pressure and trailed home in fourth, two and a half lengths behind him.

The third instalment arrived at Epsom, but neither Roaring Lion (third) nor Saxon Warrior (fourth) could land a glove on the magnificent Masar. Two and a half lengths separated the pair.

The fourth episode in the Coral-Eclipse was epic. Donnacha O’Brien, back on board Saxon Warrior for the first time since the Guineas, tried to steal it two furlongs out – just like he did at Newmarket – but a stronger, more mature, Roaring Lion pounced late to prevail by a neck. There was more drama in the stewards' room, but the result stood.

Are you ready for round five? The bell has sounded. Ladies and gentlemen, take your seats.

Paul is your pal

If your punting policy is to back Paul Hanagan blind all season you will be salivating to see four days of racing at York on the horizon. Your wallet will certainly be thrilled.

The two-time champion jockey has ridden 87 winners on the Knavesmire, six of which have come this season. If you stuck a tenner on each of his 27 rides at York in 2018, you would be £335 richer now. His level-stakes profit is higher here than anywhere else. 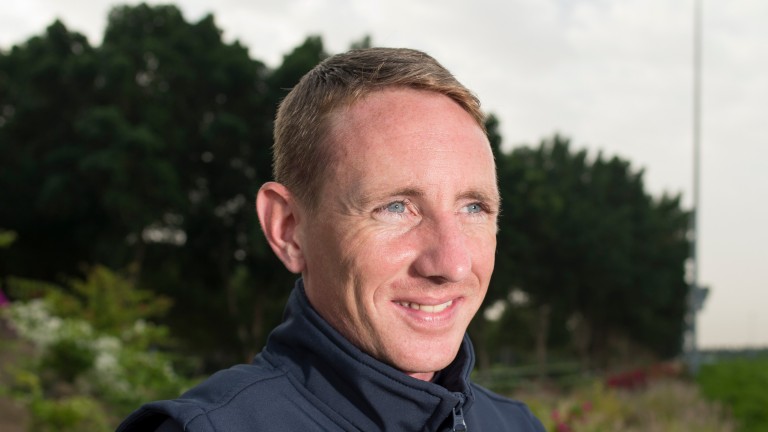 Paul Hanagan: has proved the man to follow at York
Edward Whitaker
Hanagan has four rides for Richard Fahey on day one, kicking off with Eastern Impact in the opening handicap (1.55). The seven-year-old is blinkered for the first time on his 42nd start and is running off a mark 20lb lower than his last win.

Ventura Ocean is next up in the Acomb Stakes (2.25), followed by Northwest Frontier in the Sky Bet Handicap (4.15) and Gabrial The Wire in the concluding nursery (4.50).

Since 2010 the master of Ballydoyle has had nine runners in the race and only Alfonso De Sousa in 2012 managed to finish in the first three, when third to Dundonnell.

Fleet Review (2017) trailed in ninth of the ten finishers, Courage Under Fire (2016) was fifth behind Syphax, Lieutenant General (2015) was eighth to Recorder and Jamaica (2014) finished fourth to Dutch Connection.

O’Brien had no runner in 2013 but had three in 2011, with Furner’s Green doing best of the three in seventh behind Entifaadha. Lake Ontario was fourth to New Greenfield in 2010.

The Sky Bet Great Voltigeur Stakes (3.00) has been very kind to punters over the last eight years. 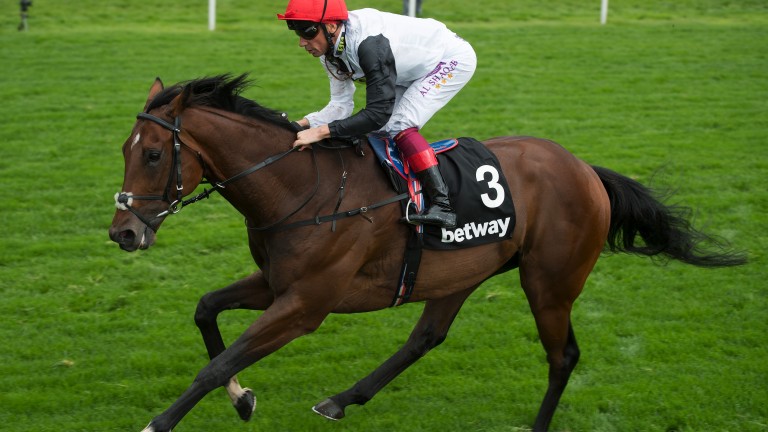 Line Of Reason makes his 79th racecourse appearance in the Sky Bet And Symphony Group Handicap (1.55), his third try at winning the Ebor festival opener.

The energetic eight-year-old was seventh behind Blaine in 2014 and fourth to Boom The Groom in 2016, off marks of 99 and 105 respectively. 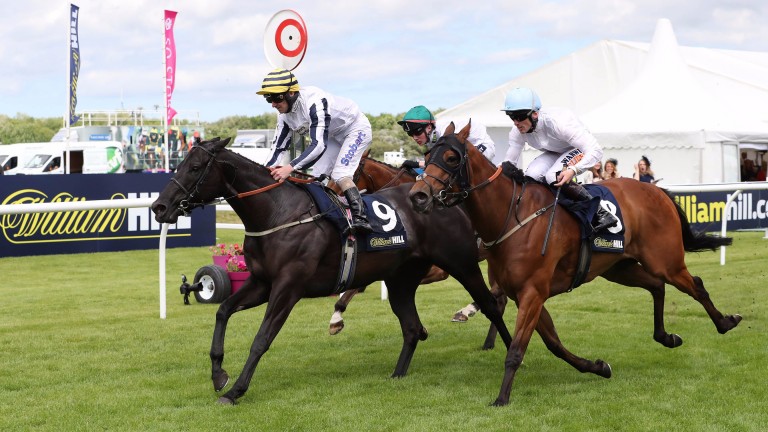 Line Of Reason (left): at his best in a strongly run sprint
John Grossick (racingpost.com/photos)

Although Line Of Reason has won at York, his form figures on the Knavesmire are 00818750040477 and suggest that he might save his best for elsewhere.

The going at York is currently good to firm, good in places, and Juddmonte International day is expected to be dry until the evening at least.

Clerk of the course and chief executive William Derby said: “Tuesday has been a dry and cloudy, slightly muggy, day, and we didn’t lose much moisture to the elements – but we decided to put 2mm on the north bend which is part of the 2m track and where they all pull up.”

“Today is forecast to be cloudy and warm with a possibility of showers towards the evening.

“It’s our flagship meeting, obviously, and Wednesday is many people’s favourite day. We’ve got a fantastic line-up for the £1m International, in which I think the runners have won £15m between them.”

Looking further ahead, he added: “It’ll be a bit fresher later in the week, but it should be dry again on Thursday and there’s just the possibility of a shower on Friday.

“The weather is on the change, and there’s a bit of uncertainty about the end of the week, but at the moment the Met Office is expecting Saturday to be largely dry.”

Jamie Codd is famous for slugging it out on a four-mile chaser or flying over hurdles, but this afternoon he encounters quite the opposite.

He is set to ride in Carlisle's amateur riders contest (2.05) over six furlongs, the shortest trip he has ever ridden over. Codd has had four rides on the Flat in Britain, with his sole win coming in the 2016 amateur derby at Epsom.