Gordon Lord Byron: runs in the race named after him at Haydock on Thursday
Martin Lynch (racingpost.com/photos)
1 of 1
By David Jennings UPDATED 9:16PM, SEP 4 2019

Gordon Lord Byron will make his 103rd appearance in a race named after him at Haydock on Thursday and Tom Hogan has even booked Frankie Dettori for the occasion.

Dettori has never ridden the evergreen 11-year-old and will become the 25th different jockey to team up with the veteran when he seeks his 17th win in the Gordon Lord Byron EBF Conditions Stakes (3.50).

Hogan has heaped praise on Haydock for the initiative and hopes he can repay them with a win. "It's a very kind gesture from Haydock to put on a conditions race in his name," said Hogan. "It's something we don't have in Ireland and we really do appreciate it." 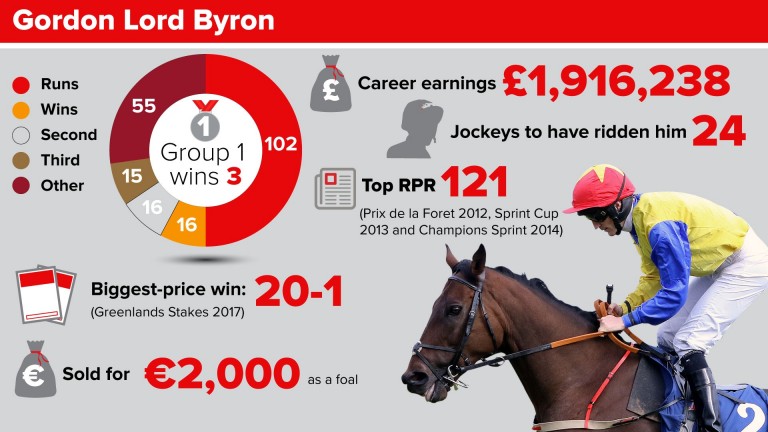 Hogan has enjoyed the trips to Haydock almost as much as Gordon Lord Byron and added: "The hospitality of Haydock has been wonderful over the years. The executive at the track are all very nice people and always made us feel welcome when we came over.

"Even when we were flying out to Hong Kong or somewhere like that with him from Manchester, we often stayed over at Haydock with him. Frankie has never ridden him – the horse is in very good form and the rider is in even better form. He will probably be more disappointed than me if he's beaten!"

FIRST PUBLISHED 6:36PM, SEP 4 2019
It's a very kind gesture from Haydock to put on a conditions race in his name

Campanelle all set to take on Starman and co in Maurice de Gheest cracker Meet the new Quixall Crossett: the 105-race maiden still gunning for a win 'We love you Hollie' screamed a racegoer - and Goodwood Cup day needed her 'The more rain the better for Trueshan' - trainer quotes on the Group 1 Frankie and Stradivarius aim to play familiar tune for returning faithful