The Greatest Ever Race NICK LUCK 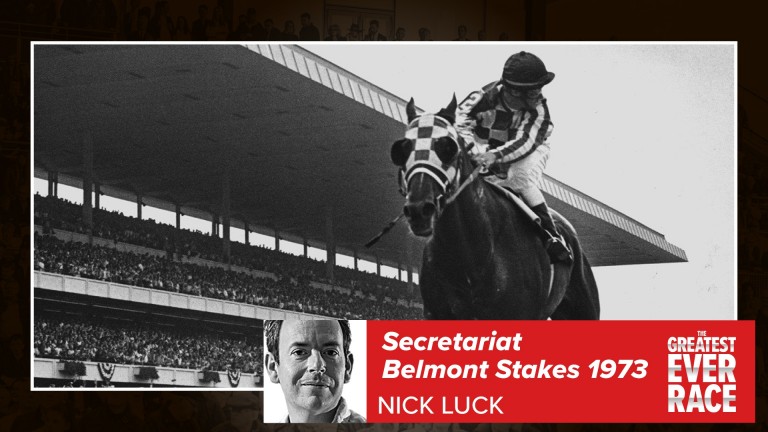 Voting has now closed for The Greatest Ever Race but you can still read our ten fantastic articles. Below, broadcaster Nick Luck nominates Secretariat's 1973 Belmont Stakes win. The winner will be announced at racingpost.com at 6pm on Saturday, July 23.

You had to be there. Except I wasn't. And most likely nor were you, as this was five decades ago and several thousand miles away. But sometimes a double shot of imagination cut with the fizz of grainy Seventies Technicolor is enough to convince you.

The field wasn't long, the finish wasn't close and the odds weren't big, but every time I watch it – which is about once a month – my belief strengthens that this was the greatest horserace ever run. This was June 9, 1973, and this was Secretariat's Belmont Stakes.

America had been without a Triple Crown winner since Eddie Arcaro had guided the first equine millionaire Citation to win all three legs in 1948, and if this made-for-the-media confection was to stay relevant as the sport's ultimate test, it needed another champion.

But if horseracing craved a hero in 1973, this was just a microcosm of the country's overwhelming desire to rally round something good. Between May and August of that year, all three major TV networks shared live coverage of the Watergate hearings, giving an estimated 85 per cent of those with access to a television a relentless journal of moral and political turpitude. As Vietnam rumbled on simultaneously, just about everything emerging from the cathode ray tube was depressing.

Except for Secretariat, a strong-limbed, clean-winded, big-hearted athlete: built to perform the simple task of running from A to B faster than all the others and executing that task with brutal enthusiasm, clinical efficiency and tremendous courage. He gave his all and couldn’t dissemble. The patrician Sports Illustrated writer George Plimpton noted that the horse "was the only honest thing in the country at the time – he just loved running".

By the time the Belmont Stakes came around, you didn't need Deep Throat to tell you that Secretariat was a once-in-a-generation sort of animal. For starters, he ran nine times en route to being crowned Eclipse Champion Two-Year-Old Male, his only losses coming when encountering traffic on his debut and when disqualified after the Champagne Stakes.

Even if running often as a juvenile was less unthinkable than in today's cosseted environment, this horse was showing fleet of foot that belied his unusual bulk. Before the horse ran, trainer Lucien Laurin reportedly told owner Penny Chenery: "Your big Bold Ruler colt don't show me nothin'. He can't outrun a fat man."

But the application of blinkers got him focused to the point that his raw power could compensate for the lack of obvious precocity. On the back foot early in his two-year-old races, rider Ron Turcotte marvelled at how he could always wheel round them all and finish off strong, coming back for more and more.

Although Chenery's father died in the winter of 1972 and she had to syndicate the horse for a king's ransom, she retained total control of Secretariat's running plans, and there was no sense of protecting his already gargantuan value. He was even defeated on the final one of his three prep runs for the Derby, an abscess in his mouth accounting for a disappointing third, one place behind Sham, the horse whose own innate brilliance would be forced into submission.

With no such ailment to worry about a few weeks later, Secretariat set about dismantling the Run for the Roses in a time of 1min 59.40sec, a record that has required no close protection in the intervening 49 years. What's more – and famously – he defied the commonly understood mechanics of the middle-distance racehorse: he started fast and kept getting faster.

Poor old Sham – a wonderful racehorse and beloved of his trainer Pancho Martin – would have been a Triple Crown winner in any other era and it is to his eternal credit that he smashed the clock in defeat in both the Derby and the Preakness.

In the frenzied build-up to the Belmont, however, even Martin's ostensibly unshakeable and, if you believe the movie, belligerent faith in his charge must have masked an inner turmoil that this thundering chestnut foe was simply hewn from a different rock.

Because everybody else now knew that normal rules did not apply and nobody knew that better than Turcotte, who couldn't possibly have ridden a mile and a half the way he did on any ordinary – or even extraordinary – thoroughbred.

Speaking to Tom Pedulla for a Paulick Report special in 2018, he said: "My plan was to sit behind Sham in the early going. That changed when I felt the power beneath me and Secretariat broke sharply. I let him get his feet under him and picked his head up entering the first turn.

"Sham and jockey Laffit Pincay decided to try to stay with us early, but I knew there was no way Sham could stay with Secretariat, whose tremendous stride allowed him to cover a great amount of ground. I never felt such strength under me as I did that day. We were flying along. We covered the opening half-mile in 46 1/5 seconds, three-quarters in 1:09 4/5 and the mile in 1:34 4/5."

Now watch the race and work out for yourself how many nanoseconds it took Turcotte to be perfectly content with Plan B, this scorching, nuclear pace notwithstanding. Pincay, one of the greatest ever, set off from his outside gate with grim intent to push his rival to breaking point, but served only to snap his own elastic.

To put those fractions into some sort of perspective, the duelling pair covered the first six furlongs faster than the finishing time of all but three July Cups. Even at halfway, the other three rivals looked woefully overmatched, gasping as the old rivals duked it out with hell to the consequences. As Sham began to give way, paddling furiously, Secretariat simply glided on serenely, knocking more than a second off Ascot's track record for a mile with still a third of the race to run.

And then the most joyous moment, spurred on to the impossible not by his mortal opponents, but by his sheer and singular desire to run like the wind.

"SECRETARIAT IS WIDENING NOW. HE IS MOVING LIKE A TREMENDOUS MACHINE."

The greatest performance of all time underscored by the greatest line of commentary, Chic Anderson's controlled tension bursting and bubbling over in almost song-like wonderment, his notes soaring deliriously over the metronomic rhythm of the horse's giant, languid stride. And then back to the hard announcer's facts to bring him home: 12, 14, 18, 22 lengths, the quarter pole passed faster than the time in which he had won the Derby. 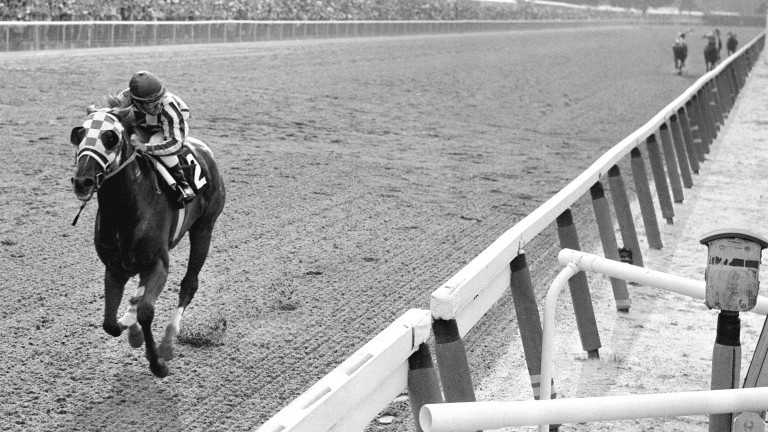 Secretariat demolishes his rivals in the 1973 Belmont Stakes
Bob Coglianese

Anderson reckoned on 25 at the line, six short of the official winning margin of 31 lengths, as the camera operator wrenched his lens with a sharp jerk to the left for a glimpse of the gnat-like runner-up in the dim distance. And of course the record had gone again, this time felled so thoroughly that it was gone forever.

There are far finer turf writers to have penned much greater tributes to this horse and this race: from Bill Nack to Jay Hovdey to Tim Layden – I urge you to read them all. But equally powerful are those witness testimonies that now sit unassumingly under the footage of the race on YouTube, many underlining the profound impact of this horse and this race. One writes: "The tears always flow watching him run. It is like watching the spirit of life itself, the drive to win the breath of God." Another: "There's something about this horse that transcends the human spirit. He seems to touch us emotionally on every level."

Secretariat's Belmont was a race of its time, yet timeless. It was the cover of Time magazine and you would give anything to go back in time to be there. It will stand forever as an emblem of perfection in the thoroughbred, the grown-men-cry defining moment in a career that was as much a tribute to the boldness of his charismatic owner as it was to his own brilliance. And it came when his country needed it: when a fast horse with quite literally the biggest heart was the purest embodiment of upstanding in a turbulent time.

Horses aren't machines. Except sometimes they are.

'I'm still waiting to see one as good'

The Belmont wasn't a surprise according to the way Secretariat had been working. We had three weeks after the Preakness so I had to give him some strong workouts, but he was working in record time, working faster than horses were running the same afternoon. His last workout was faster than he ran the Kentucky Derby.

I was so sure he'd win that I went out for dinner with Lucien after his last workout and I told him if the horse was beaten I'd retire; that's how certain I was. 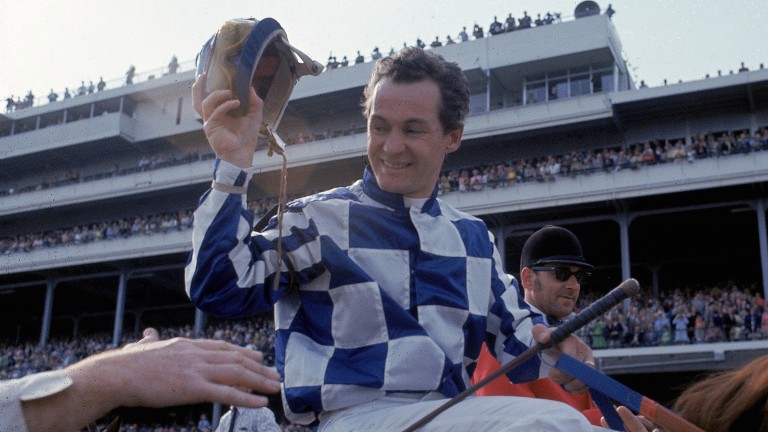 Secretariat drew in the crowds and they'd go crazy over him. He was something else. He was a show-off, but in a nice way, playful. I have a feeling, and people would say the same, that he knew that he was the best and how good he was. He's the best horse I've ever ridden or ever seen.

Hollie Hughes, who trained the winner of the 1916 Kentucky Derby, came to me before the Belmont and told me he thought Secretariat was the greatest horse he'd ever seen. Not only that he was the best-running horse he'd seen, but the best-made as well. He had everything and was good-looking with it too. I can't fault him in any way.

I had a Hall of Fame career before I rode him, but to be known as the jockey of Secretariat was something else. I'm still waiting to see one as good.