The Greatest Ever Race JESSICA HARRINGTON 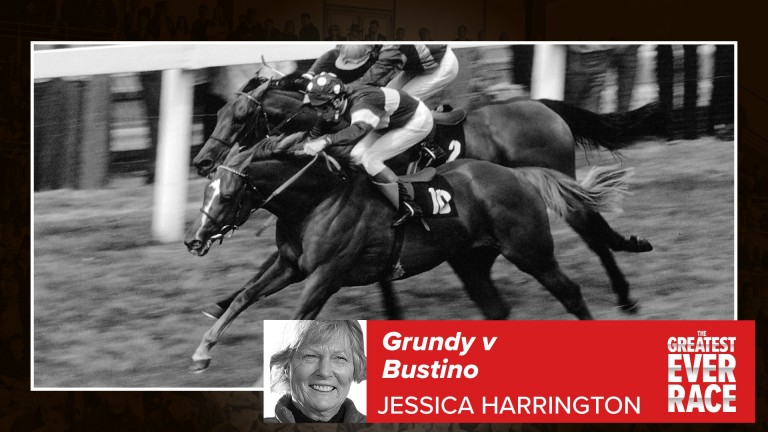 Voting has now closed for The Greatest Ever Race but you can still read our ten fantastic articles. Below, leading trainer Jessica Harrington nominates the battle between Grundy and Bustino in the 1975 King George VI and Queen Elizabeth Stakes at Ascot. The winner will be announced at racingpost.com at 6pm on Saturday, July 23.

Ascot in all its splendour on a hot summer's day is like nowhere else. When you get that fusion of nature's best look and top-class Flat racing, it can be intoxicating.

July 26, 1975 was just one of those days, a hazy, sepia-tinted moment in time etched forever in the memory of those of us who were around to witness it.

To this day, few who watched Grundy and Bustino tangle down the Ascot straight will have to think twice when asked what was the greatest race they've seen. I was lucky enough to be at Ascot that day. More than that, I was heavily invested in it – emotionally at least.

Pete and Bonk Walwyn were great friends of my late husband Johnny and I. We often went on holiday together, and Pete stayed here in Commonstown with Johnny when he came over with Grundy for the Irish Derby. The return trip for the King George VI and Queen Elizabeth Stakes made for something extra special.

I was in England at the time and travelled down to stay with them for the weekend, landing in Seven Barrows on the Friday. The buzz about the place was amazing, so you can imagine what it was like when we got to Ascot. It had been built up into this epic clash and people didn't know what was going to happen, so the atmosphere fizzled with tension and energy.

Grundy was the favourite, not least because he was getting a stone off Bustino, who had won the St Leger in 1974. It was a lot of weight to have to concede to a high-class rival, another of whom was the Lester Piggott-ridden Dahlia, who had won the King George in 1973 and 1974. She was a brilliant mare who at the time was the only dual winner of the race.

Star Appeal was in there too. He'd come over from Germany to be second to Grundy in the Derby and won the Eclipse before ultimately beating Dahlia in the Prix de l'Arc de Triomphe. So it was a proper race.

Dick Hern ran two pacemakers, Kinglet and Highest, to try to make it a genuine stamina test for Bustino, who had already done something pretty remarkable by coming back in trip to win the Coronation Cup in a course-record time.

I think he might have also been conscious that Grundy had already had a busy time of it and wanted to see if he could make him crack. After a close shave with a stablemate's hind shoe in the spring – Corby had caught him in the head just a couple of inches from his eye – Grundy was beaten in the Greenham before finishing second in the 2,000 Guineas.

He then swept all before him in the Irish 2,000 Guineas, the Derby and Irish Derby. It was a lot of racing at the highest level for a three-year-old so the Bustino camp were desperate to ensure this would be a thorough test of his mettle.

Bustino actually broke fast and initially led under Joe Mercer, but Highest then took over from Kinglet. Star Appeal followed them and then came Bustino and Grundy.

Highest set a ferocious pace so they were racing in single file, and by the time they'd got to halfway Highest was out of puff. Kinglet took the baton from there, but he couldn't even get them into the straight.

Joe Mercer didn't want it to let up at all, so he swooped to the front more than half a mile from home, making Star Appeal look like a leaden-legged statue in the process. It really was startling to watch, as you could see what they were trying to do. There was going to be no hiding place.

When you watch the race back, it's extraordinary what Grundy did while the race was unfolding up ahead. Pat Eddery could see what was happening and he was alive to it, so when Joe seized the initiative, Pat reacted immediately. He made up a lot of ground quickly just before the straight, and then turning in it briefly looked like he was in trouble and that Bustino had got him at it.

However, he found again and got to Bustino, but Bustino pulled out more, so Grundy had to go to dig even deeper. Toe to toe, blow for blow – it was just the most engrossing encounter.

Bustino, with his tongue hanging out, really served it up to him, and he was an older, hardened horse. He was still in front as they passed the furlong pole and they went hammer and tongs all the way home. It gripped you all the way to the line. 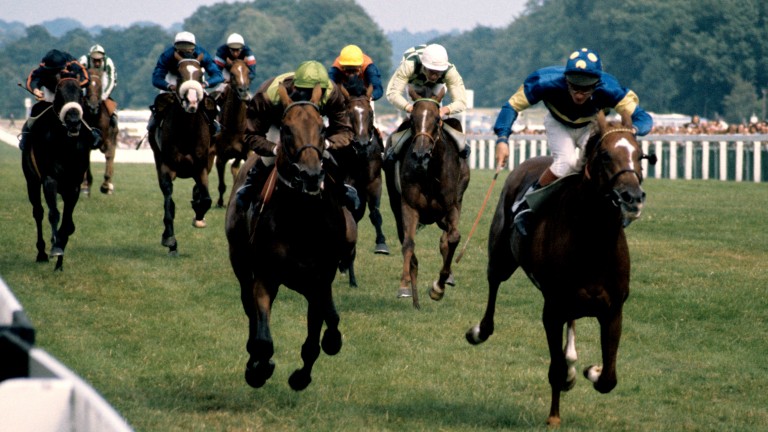 For Grundy to get on top by half a length showed how brave he was, but there's absolutely no doubt the race took its toll. They went so hard early on, there was no let-up or breathers, and they slugged it out to the bell like two brawling heavyweight boxers. It was a title fight between two big hitters so it was punishing.

The clock provided unvarnished proof of the calibre of race we had just witnessed. At 2min 26.98sec, it beat the existing course record by 2.36sec and was the fastest 12 furlongs ever recorded in Britain at the time. Not only did Grundy and Bustino break the track record, so did Dahlia in third – and she was five lengths behind them! It was 35 years before Workforce ran a better time in the race.

In providing the dust-up they did, Grundy and Bustino emptied their tanks. They left it all out there.

Grundy ran only once more. He was odds-on for the Benson and Hedges Gold Cup – now the Juddmonte International – at York, but never landed a blow behind Dahlia, on whom Piggott made all the running. Star Appeal also finished in front of him at York in third.

Grundy just had nothing left to give, nor Bustino, who never even graced the track again. It was the price they paid for the phenomenon that unfolded in front of us. 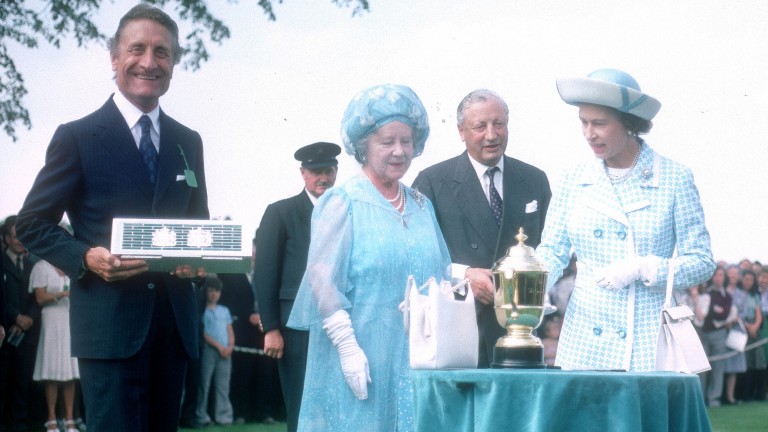 Often, the big duels we build up fail to match the enormous expectation we confer on them, but this was one of those rare occasions where we got what we had anticipated.

For me, the best races are the ones that leave no question unanswered. When people talk about the 2004 Tingle Creek being one of the great jump races, I always feel it was because it had that definitive dimension. A year earlier, when Moscow Flyer won by four lengths, Paul Nicholls felt Azertyuiop wasn't at his best because he hadn't had a run. Then Moscow Flyer fell over at Cheltenham and Azertyuiop went on to win the Champion Chase.

When Sandown came around again in December, Azertyuiop had a run under his belt, and then you had Well Chief, the Arkle winner and pretender to the throne, in there as well. So you had all of the build-up and expectation that comes with it, but Moscow Flyer came out on top again. There were no excuses.

The 1975 King George was one of those conclusive sporting events.

Hugh McIlvanney described it as "a glittering, flawless example of horseracing at its most irresistible" in The Observer, and when Sean Magee asked 30 jockeys to contribute to his book The Race of My Life, you won't be surprised to be reminded that it was the race Pat Eddery selected. What might be less predictable is that it was also the race Joe Mercer plumped for, despite coming out on the wrong side of it.

It was frequently described as the race of the 20th century and you couldn't argue with that.

Of course, we also got a great celebration out of it.

We went back to Lambourn that night for dinner with the Walwyns, and then on to Seven Barrows, where you always got the best parties – and still do!

On a beautiful summer's evening we lounged by the swimming pool and basked in the majesty of what had just unfolded. It was glorious. Just glorious.

'We hammered down to Swinley Bottom like six-furlong sprinters'

In an extract from The Race Of My Life, the late Pat Eddery recalls the battle

Dick Hern was convinced Grundy wouldn't truly stay the mile and a half and was determined to exploit Bustino's undoubted strength – stamina – by ensuring a strong gallop. Bustino's usual pacemaker, Riboson, was injured, so a plan was hatched to use two stablemates – a miler and a stayer – to force the pace.

The pace those two set from the start was staggering. I'd expected a good mile-and-a-half clip early on. Instead we hammered down from the start to Swinley Bottom like six-furlong sprinters – it was amazing!

Highest led us for the first half-mile or so, with Kinglet second and Bustino third. I was fourth, with Star Appeal upsides. At Swinley Bottom, Star Appeal went past me as Highest gave up the ghost and the stayer Kinglet took up the running, while I stayed tracking Joe Mercer on Bustino. Kinglet led for most of the long stretch out of Swinley Bottom until Bustino took it up approaching the home straight.

With Grundy already off the bridle, I desperately tried to keep him in my sights, thinking: I'd better get after him. But I just couldn't go with him; he was gone – three or four lengths up – and kept finding more, and it was well into the straight before I thought I'd reach him. Halfway up the straight I started to come alongside him, a furlong out I thought: I've got you! I just headed him and felt we'd go on for a hard-fought but decisive victory, then – shit! – those green and brown colours appeared on the inside again. That tough old bugger was fighting back! 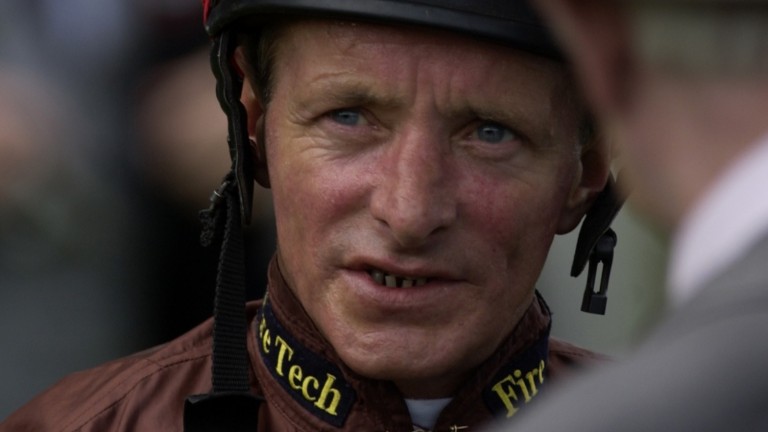 Pat Eddery: "Grundy's meeting with another lion produced one of the greatest races of all"
Edward Whitaker (racingpost.com/photos)

Grundy was not a big horse – Bustino was a size larger – but was endowed with tremendous guts and honesty, and now his bravery saw him home. He just kept going through the final half-furlong as Bustino finally cracked.

Four or five strides after the line Grundy wobbled to a halt. I thought for a moment I'd have to get off him just to walk back to the winner's enclosure. He was completely drained. He seemed to have recovered and we aimed him at York in August, but he ran very flat. From about half a mile out I knew he'd gone – the Ascot race had left its mark, if not physically then certainly mentally.

He never raced again, but that day at Ascot he was a lion of a horse. His meeting with another lion produced one of the greatest races of all.

The Race Of My Life, by Sean Magee, is available to buy on Amazon