Expert view: all you need to know about the John Smith's Cup 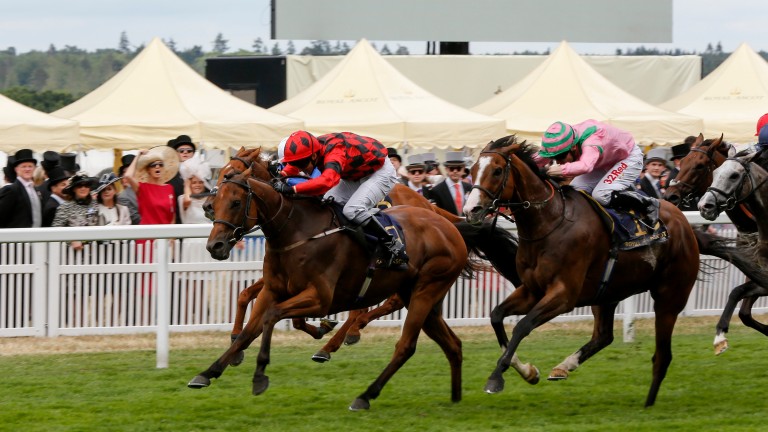 1. Sixties Groove was well backed for Royal Ascot’s Duke of Edinburgh Stakes and ran on strongly from an unpromising position to finish fifth behind Rare Rhythm. Jeremy Noseda had Man O'Mystery finish second in consecutive years in 2000 and 2001, and Sixties Groove, who will be suited by the long straight, could well change his luck.

2. It’s a big day for apprentice Raymond Dawson who partners the Mick Appleby-trained Big Country. The rider’s 7lb claims could prove highly valuable from a good draw in stall 4, and the gelding boasts winning form over course and distance.

3. Roger Varian is always one to keep on side in valuable handicaps of this nature, and the best is yet to come from his four-year-old UAE Prince, fifth in Listed company behind Desert Encounter last time out.

Henry Ponsonby, syndicate manager for Scarlet Dragon
He was a very good winner over the course and distance the only time he's been to York, and he's come on for his reappearance behind Snoano at Royal Ascot, where he was beaten only a couple of lengths. He's in great form.

Roger Varian, trainer of Central Square and UAE Prince
UAE Prince has been gelded since his run at Ascot and I hope that will help him at the business end of the race. He's always shown plenty of speed and the drop in trip at this course should suit well. This has always been the plan, although I'd have liked a lower draw. Central Square ran much better than his finishing position suggests in the Wolferton. He's training well and has a nice prize in him.

Tim Easterby, trainer of Snoano
He'd ideally like a bit of rain but he's in great form and should run well.

David O’Meara, trainer of Bravery
He’s in good form and a drop of rain at York would help.

Richard Fahey, trainer of Another Touch and Garcia
Another Touch has stall 19 to overcome. He’s up in trip and we’ll drop in and hope for a strong gallop. Garcia makes his seasonal reappearance after having little, niggly problems, but he's very fit and very well and this has always been the target.

William Haggas, trainer of Victory Bond
He'll run only if they get rain. It's threatening to come but he won't run if the word firm is in the going description. He's very well, a very useful horse.

Bruce Raymond, racing manager to Saeed Suhail, owner of Ballet Concerto
He ran well in the Hunt Cup but I think he has a lot more in his favour here. The longer trip and goodish ground should be ideal, and he's got a pretty good draw.

David Simcock, trainer of Dragon Mall and Majeed
Dragon Mall is such a frustrating horse. He threw his race away at the start at Ascot last time. An outside draw isn’t what I wanted, but he has plenty of ability. Majeed was unlucky in the Wolferton. He’s in great form.

John Best, trainer of Eddystone Rock
Our horses are in great form and I think he's overpriced. Like Sixties Groove, he didn't get any luck in the Duke Of Edinburgh, and with a clear run he wouldn't have been far away.

Mick Appleby, trainer of Big Country
He's in great order and I hope they get the rain that's forecast because if they don't he might not run. He didn't get home over 1m4f at Haydock last time the way the race panned out for him, and track and trip should be ideal here.

Jeremy Noseda, trainer of Sixties Groove
He's in great order. In the circumstances he ran very creditably at Royal Ascot and I'm happy with how he's come out of his race there. He's done one nice piece of work since and we're looking forward to the race. The track, trip and likely fastish ground all should be suitable. He goes there with a very solid chance.

Ed Dunlop, trainer of Dark Red
He's overpriced and should run well so long as the ground isn't too quick. He ran very well first time out at Newbury and was then struck into at Chelmsford. He's come back in good form since his break and is well drawn.

FIRST PUBLISHED 6:00PM, JUL 14 2017
Sixties Groove is in great order. In the circumstances he ran very creditably at Royal Ascot and I am happy with how he has come out of his race